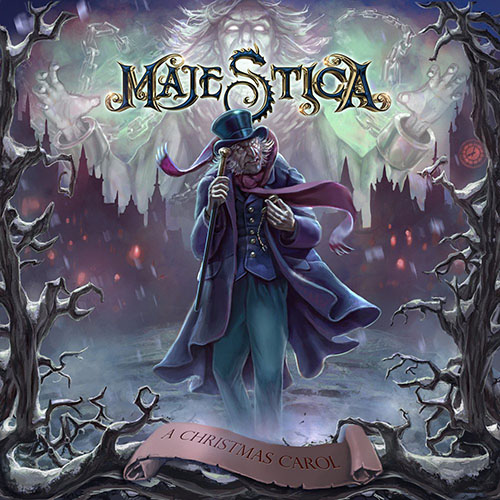 It is prevalent, especially in recent years even more intensely, that as the Christmas’ holidays approach, many bands are going to release a song, an EP, a video, some covers of well-known songs or carols celebrating the festive spirit of the days. Moving within this habit, the Swedish Power Metallers MAJESTICA decided to release their new album. So, a few days before Christmas, they released their second full-length album “A Christmas Carol”.

The title is enough to guide the listener to the lyrical content of this work. This is a concept album, which is essentially the musical metaphor of the classic and educating novel by Charles Dickens “A Christmas Carol”. The story it describes is more or less known to all of us. This is the story of the miser and extremely rich Ebenezer Scrooge, who dislikes the Christmas spirit and the festive atmosphere that is contrary to his business rationality, until at the risk of losing his own soul, three spirits come to help him by reminding him the true meaning of Christmas.

MAJESTICA take this timeless story and convey it through their music, highlighting it in a really beautiful way. A narrator (the singer), several voice actors (mainly the band members), choirs that enhance the atmosphere of the songs by chanting carols and other well-known melodies of the holidays, as they do in “Ghost Of Christmas Present”, manage to transport you into the heart of this wonderful story. The instrumental opening and closing of the album are also very nice, introducing the listener to the main theme, but also accompanying him at the end with a glorious note. The result is beautiful, at times nostalgic, awe-inspiring and it certainly achieves its purpose.

Very nice Power Metal from the Swedish band, a very good effort to convey the novel and overall a solid effort on their version of “A Christmas Carol”. But if MAJESTICA win the bet on something, it is by reminding us in the difficult times we are going through this year, that the spirit of Christmas in its original form remains somewhere out there. Keeping positive thoughts in our minds, hope is not lost and this year’s looming darkness will simply be defeated in the end.

In Flames – Soundtrack To Your Escape