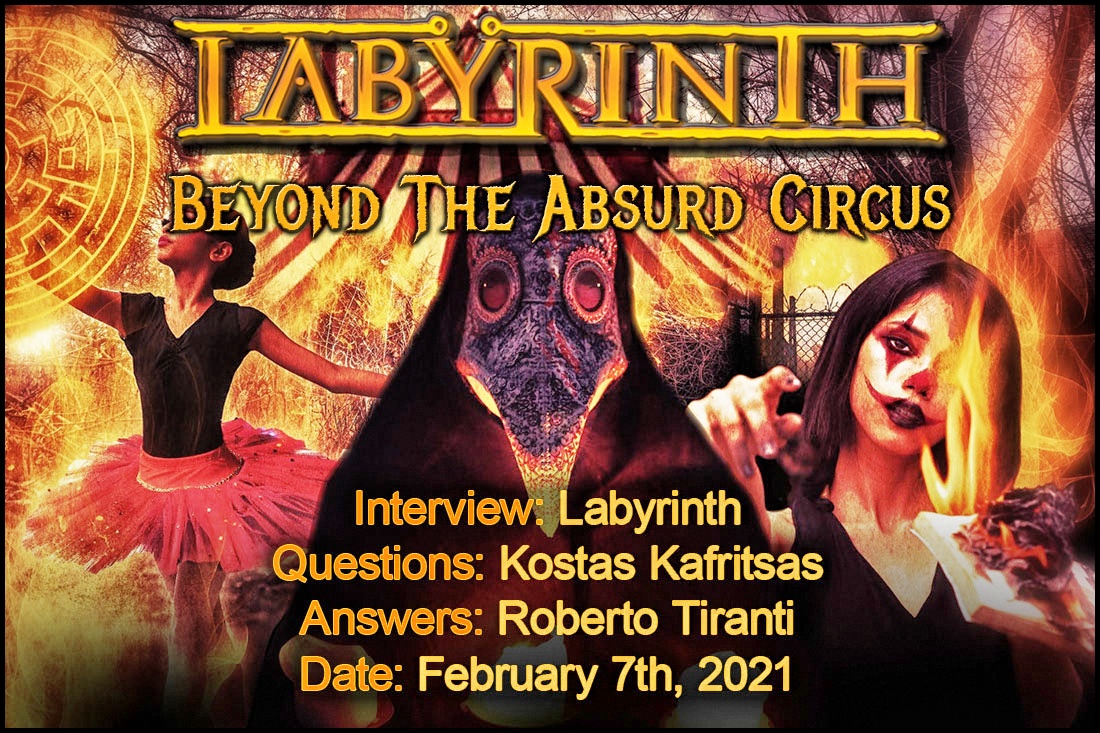 LABYRINTH have just released a brand new album. THEGALLERY.GR had the opportunity to talk with Roberto Tiranti, the frontman of this Italian Power Metal band. Roberto shares many interesting information regarding “Welcome To The Absurd Circus” album, elaborating at the same time on the glory days of the past…

– Hello Roberto, first of all, congratulations for your new album “Welcome To The Absurd Circus”. It is a great comeback! How do you feel about it?

Roberto: Hi there! We all feel so proud of our new album. Both in terms of music and lyrics, we included in it all the things we wanted to express.

– How has the band’s sound evolved in your new album, in comparison to “Architecture Of A God”? Needless to say that you had raised the bar quite high with your previous release.

Roberto: Well, normally we don’t plan the direction of our music, even if it’s clear for everyone in the band that everything has to sound as much “LABYRINTH” as possible. In this case we just agreed between ourselves that “Welcome To The Absurd Circus” should have been stronger and more compact than the previous one.

– In regards to the recordings, you have chosen to continue with the same sound producer. I guess that you have found your own way and you are quite satisfied by that, could you please share with us this experience?

Roberto: Simone Mularoni is a real friend of ours, a very talented musician and a great sound engineer. He knows us as musicians and he is familiar with all that we need in terms of sound and mixing. Working with him is an amazing experience and I can easily admit that we consider him as a seventh member of LABYRINTH.

– You had one line up change, and I need to admit that Mattia is a great drummer! What was his contribution to the whole process? How different was his approach compared to John’s?

Roberto: John Macaluso is one of the best drummers you can find nowadays in rock/hard rock/prog/metal and I was so grateful to had him in “Architecture Of A God”. It is certainly not easy and probably not appropriate to compare him to Mattia, for several reasons. Mattia is a talented young drummer, a fan of this band since many years, he just put all his energies in this new album, as you noticed. For me, this line up is absolutely great and we have to thank also Mattia, Oleg and Nik, contributing to a killer sound.

– “Keeping the distance to survive, face and hands sheltered like never before, new uniform for this strange war“… Obviously, I could indicate that some of your lyrics have a social direction and meaning. Could you please explain more about the inspiration and influences you had this time when writing the lyrics of the album?

Roberto: Regarding the song “Absurd Circus”, I simply wrote what I see around me, what we are all living as a reality due to Covid 19. As for few other songs, as you noticed, for example in “Words Minefield”, I refer to hypocrites who are changing our words and vocabulary, trying to take more care of the surface than the truth and the real meanings. Everything now is politically correct but we still see and face terrible actions. Sometimes I think that we still live in middle ages, disguised as modern times due to technologies, however the truth is that we still burn witches, the difference is that we use more “appropriate” words. In “Den of Snakes”, I refer to internet addictions, something absolutely hard to handle nowadays.

– In the end, what is this absurd circus we are living in at the moment? And what is “the paradox, that will make us free“, according to your opinion?

Roberto: I think part of this answer lies in the previous one and the “paradox” means that if we would like to win this battle against the f***ing Covid 19, we have to keep the distance. We usually fight and win staying close together, but this time is really different. The absurd circus is exactly the world nowadays, a place that is getting harder to live in. However, as I am not that catastrophic, I really believe that there is hope to get out of this situation. This is the message of the last song of the album “Finally Free”.

– I was wondering what are the expectations of your new album, especially taking into consideration the unique situation we are in now with the pandemic.

Roberto: In a situation like this, we perfectly know that we cannot promote the album as usual, through the typical little tours or live gigs here and there, however we are here now releasing an album, meaning that we give a clear signal that the band is still alive and kicking. We are totally happy about the feedback we are getting from the press and 99% of the people out there love the new album. We already knew that we had in our hands something good but we never expected a success like this.

– As an old fan of LABYRINTH, I am very happy to see that the band is fully “back on track”. Almost 30 years from its formation, the spirit, the vibe, the old feeling are still here. Do you think that LABYRINTH could potentially gain more popularity during these 30 years in case that several things would go differently?

– Roberto: LABYRINTH is a strange band. Me, Olaf and Andrea Cantarelli just continue to follow our hearts more than any other concept of fame, money and so on. Maybe that’s the reason why we didn’t get back what we could really deserve. We made mistakes, we said “no” when we could easily say “yes”, we never follow the easy way but at the same time we are proud of it with no regrets.

– Is there any LABYRINTH album that you think that is quite underrated and didn’t receive the proper attention?

Roberto: Every album is the “child” of the historical period in which we wrote it, so, as I mentioned to you before, we have no regrets. People that once hated for example “Freeman”, they now love it, the same goes with “6 Days to Nowhere”. I still listen to them with peace in my heart.

– It seems inevitable that I forget highlighting “Return to Heaven Denied”, I assume you expect it happening in most of the interviews. It is an exceptional album, being released in a period when Power Metal and Progressive Metal were really on the rise, with a massive European scene and positive vibe that was dominating the Metal scene. What do you remember looking back at these days?

Roberto: As I just mentioned, we are strange people! I joined the band in 1997, and 80% of the album was already written. I just took care of the melodies of “Falling Rain”, “Die for Freedom”, and “New Horizons”. I clearly remember the recording sessions for the demo tape between April and July 1997 and in November/December the definitive recordings of the album. Well, we didn’t really know what we had, we never took care about other bands around the Europe, we were just doing our best in that album, far away from the label “Power Metal”. Metal Blade was an unbelievable surprise, everything started so suddenly and it was incredible.

– I was wondering whether there are any news or plans for the future in regards to your personal and side musical projects.

Roberto: My life is full of projects and music, sadly in November Ken Hensley left this earth, so no more concerts with KEN HENSLEY & LIVE FIRE, but there are news with WONDERWORLD, a band made by me, Ken Ingwersen and Tom Arne Fossheim. We are now preparing the fourth album. I’m also working on another solo album.

– I would like to thank you for this interview and for all the useful information about LABYRINTH. I wish you best of luck with the promotion of your new album. The last words are yours.

Roberto: Thanks a lot to you for the nice interview and all your readers for their attention. We are living in an “Absurd Circus” but NEVER SURRENDER! We will come back, the music will come back as well and I/we really hope to be on stage soon, especially in your beautiful country!