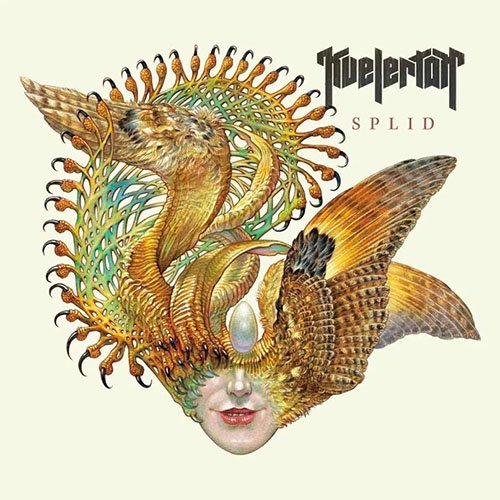 I would like to start by saying that I was a little concerned about the future of these fine young Norwegian guys. First, the band’s third album “Nattefrost” blotted the waters a little bit with its Hard Rock pursuits and secondly the departure of the characteristic front man Erlend Hjelvik in 2018 made me think that the band’s next news would involve its breakup. So, I don’t have to explain how pleased I was when they announced their new singer Ivar Nikolaisen last summer and then that they were working on their fourth album “Splid”.

KVELERTAK returned to God City Studios to work again with Kurt Ballou, who turns out to be the ideal producer for the gang and their wild ideas. “Splid” is a return to the familiar sound of Black Metal, Punk and Rock’n’Roll of the first two albums, with a little bit of tampering of the genre ratios but also with many new elements. The scale this time leans more towards the Punk/Hardcore sound but without missing the blast beats and the THIN LIZZY melodies on the guitars.

Ivar Nikolaisen may not sound as menacing as his predecessor, but he has a wider range of vocals as he swifts very easily from shrieks to ferocious Punk vocals and from there to pure melodic singing. Another change we encounter in “Splid” is that of the drummer – Håvard Takle Ohr took Kjetil Gjermundrød’s place and with him, he brought a slightly more technical approach to the drums. Apart from these lineup changes, KVELERTAK’s new album offers us quite a few new things. First, we have the fact that in “Crack of Doom” (with the superb guest vocals of Troy Sanders from MASTODON) and “Discord” the band sings in English for their first time ever! There’s also this nostalgic 80s guitar of “Tevling” which personally reminded me of the melodies from songs like Kim Carnes’ “Bette Davis Eyes” and POLICE’s “Message In A Bottle” (I would love to see the band exploring this direction more in the future).

The biggest surprise for me though was the more progressive mood of the band with songs like “Bratebrann” (Punk, QUEEN choruses and AC/DC riffs), “Stevmenote  med  Satan”, where you can see the influence that MASTODON had on the Norwegians when they toured together in early 2019, as well as the amazing  “Delirium  Tremens” (inspired by the well-known Belgian beer?) where KVELERTAK meet the restless spirit of bands such as BURST and INTRONAUT to create one of their best songs they have ever written. A labyrinthine composition that begins with some gorgeous clean melodic guitars to culminate in a stormy blast beat and ultra-frantic leads! Of course the party mood is still here and songs like the opening track “Rogaland”, “Necrosoft” where Black Metal meets a Rock n Roll piano and “Uglas Hegemoni” which begs you to sing along without caring if you know Norwegian or not! I must not forget, of course, that “Fander ta dette hull!” has one of the best combinations of Hard Rock, Punk and Thrash Metal you’ve ever heard of and that “Ved bredden av Nihil” has probably the most epic Black Metal moment of the band!

Yes! The Norwegians have returned with a bang and perhaps their best album since their eponymous debut. Mature, refreshed and full of ideas that will make you ask for more and shout out with joy: KVE-LER-TAK!