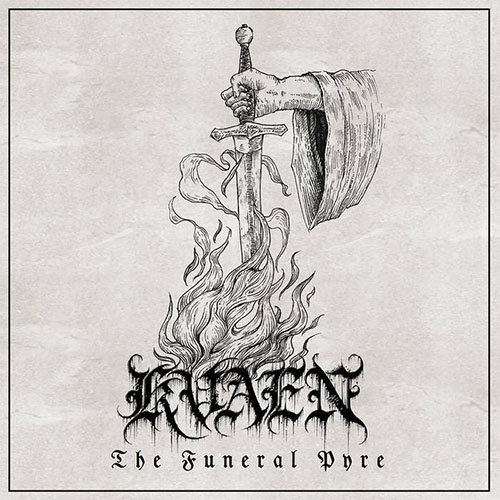 KVAEN from Sweden is a brand-new band, as it was formed just in 2019 by Jakob Björnfot, (whom many will remember from THE DUSKFALL). It is actually a one man band as Jakob does everything in the band (except from playing the drums). In 2020 the band introduces us to its debut album “The Funeral Pyre”, which has already caused a sensation in metal community. Note that Björnfot has called the following session musicians: Sebastian Ramstedt (NECROPHOBIC, ex-NIFELHEIM), Perra Karlsson (DREADFUL FATE, IN AETERNUM, ex-DESTROYER 666) and Danni Jelsgaard (ex-SVARTSOT) who play the drums in the album’s compositions.

The record starts with “Revenge by Fire” at Black/Thrash/Speed (reminded me a lot of NIFELHEIM) path and where you start to think that “The Funeral Pyre” is another nostalgic Black/Thrash album, enters a melody that takes you back to the golden years of IN FLAMES and DARK TRANQUILITY. While the breakdown that follows and brings in mind JUDAS PRIEST crushes your original thought. Continue with “Yee Naaldlooshii”, a Black Metal song mostly influenced by DARK FUNERAL.  And at that point you begin to realize that you are dealing with a record that has influences from JUDAS PRIEST to BATHORY and DIMMU BORGIR.

Next song is the title track which is also differentiated as it is closer to the melodic Death Metal with cleaner guitar melodies and quite a variety of influences. The record continues at exactly the same path, with each song being for the listener an adventure, a fascinating musical journey that you don’t know its final destination. It’s impressive that Sebastian Ramstedt’s ability to write songs that you can’t rank in a particular metal genre. Remarkable is the work that has done on guitars and solos as the record is very melodic for Black Metal, and the techniques he used are not often found on Black Metal albums.

The only negative thing I can find here, that prevents me from calling it perfect, is the drums. In “The funeral Pyre” participate four drummers! When I read it at first, an excitement was created but when I heard the final result, things got a little different. I don’t imply that the drum-section sucks, it just sounds like they’ve not “taken care” of it like the guitars. However, the musical quality of the specific album is so high, that many may not even notice that detail…

KVAEN comes out of nowhere and releases a record that, at the end of the year, perhaps will be considered as the best album of melodic Black Metal scene for 2020. The Swedes proves with “The Funeral Pyre”, that they are extremely inspired as Jakob Björnfot combines harmonically his talent and technical capability, offering us an album that is old school, from rhythmic guitars and drums till the vocals, but at the same time sounds fresh because of its ideas and modern production. I personally believe that KVAEN with “The funeral Pyre” released not only one of the best records on melodic Black Metal for 2020, but also one of the best releases during the last years in the genre.

Heaven Shall Burn – Of Truth And Sacrifice