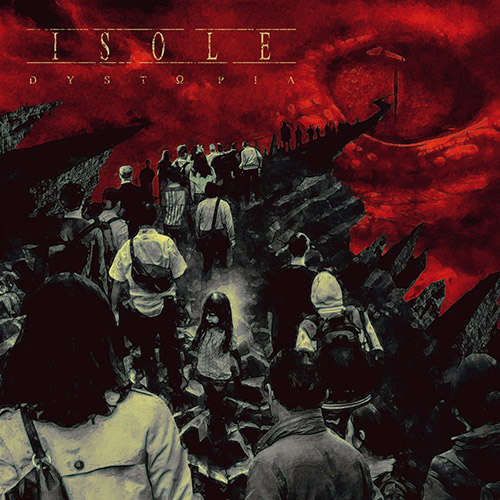 ISOLE is a band that comes from Gavle, Sweden (European Cultural Capital 2014 among other things). They were formed as FORLORN back in 1991, released only six demos and changed their name into ISOLE in 2004 releasing until now seven full length albums without any change in their musical orientations yet. “Dystopia” is their seventh, more recent work and was released in August 2019.

“Dystopia” contains six tracks and their duration varies from six to eight minutes each. Their 2014 release “The Calm Hunter” had intense influences from CANDLEMASS, a fact that combined with two members also being in EREB ALTOR made me having great expectations for this release. Fortunately, ISOLE didn’t disappoint me once again. There is a nice continuation in the music, the Doom riffs are present, the sluggish compositions, the low and mid tempos, the  alternating vocals  by Crister Olsson and  Daniel  Bryntsein epic rhythms and feelings (did we mention EREB ALTOR?) with  a combination of clean and growl vocals without  being  Death/Doomish.

The classic Doom riffs are everywhere especially in  “Written In The Sand” track , which looks  like a forgotten track that was kept hidden in the drawer of “Ancient Dreams” era and now came up. Their choice to add Swedish vocals in “Galenskapens Land” strengthens the epic element, giving also a Viking touch.  We mentioned earlier that there is a constant flow of music without the common error of repeating and being boring and the slow moments inside the tracks give the opportunity to the listener to reconstruct his attention to what is coming afterwards, the climax to the peak. To this climax helpful elements are of course the big doses of CANDLEMASS, the Holy Trinity from Britain and  the old  Swedish Doom/Death  scene  (KATATONIA).

“Dystopia” is the kind of Doom metal that we are all waiting for, demanding and wishing to listen. With this release ISOLE are establishing their name as a great value in the DOOM METAL scene and make us looking forward for their next effort with great impatience and interest. In my humble opinion “Dystopia” is the best Doom metal release for 2019.