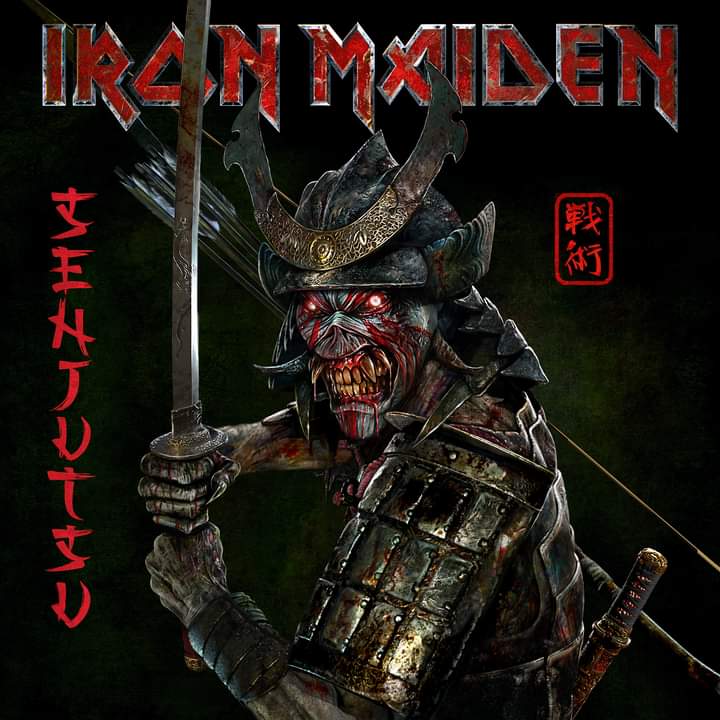 Usually when we start the review for an album, we mention some basic things about the band so we can recommend it to someone who may not know it. When it comes to talk about IRON MAIDEN’s new album, such recommendation would be unnecessary, since it is one of the most recognizable bands, in the world!

As a fan, with the announcement of the new release of the “Beast”, I tried to prepare myself for any possible outcome. The 46 years of career, the average 63-64 years of age concerning the members, make you consider that something might not go very well with the upcoming album entitled “Senjutsu” (Japanese word for “war tactics”). However, nothing can describe the feelings after the first listening of the new-seventeenth album of IRON MAIDEN. They say that the first contact with something is the most important. When the fourth and the fifth and the sixth bring exactly the same feelings and the same thirst to hear something again and again, then they are probably right about the importance of the first impression.

The bells that something great is coming from the side of the British legends, have already started to sound with the first two singles that MAIDEN released. Given the fact that their singles, especially in the post-reunion era, are never the best songs on each album, this raised all expectations very high. The complete album proved that the same thing has happened once more…

An IRON MAIDEN album, whether you are a fan or not, is a great music event and, of course, it should be treated as such! So let us begin our journey in the footsteps of the new work of the Beast.

This new album starts with war drums. The imposing introduction is followed by the narrative voice of Bruce Dickinson and the listening of “Senjutsu” is now a fact. The self-titled and first song of the album is not what we would call a “classic opening song” as it is a mid-tempo war song, very melodic (a lot of melody prevails throughout the album), a Thourios from the Beast, which is built slowly and atmospherically, while Bruce’s voice rises to a height, conveying the whole atmosphere of war of agony.

The second single of the album, “Stratego”, is one of the two songs that last less than five minutes. Classic IRON MAIDEN rhythms, perhaps in the most “traditional” style song of “Senjutsu”. Galloping, dynamic riffs, a beauty. A concert song, in the standards of MAIDEN that we loved.

3. «The Writing On The Wall» – Adrian Smith, Bruce Dickinson

The first single of the album, the first collaboration of the two artists in “Senjutsu” and the first surprise, as it is a very different song from the ones we are used to from MAIDEN. Another mid-tempo song, with a western aesthetic, an amazing riff, a very strong atmosphere and a more Hard Rock approach. Another very strong song in a different style of what we are used to from the band.

The first of the four (!!!) songs that bear only the signature of leader Steve Harris. For the first time since the band reunited, so many songs have been written by the captain (the only time he has written more is in “Fear Of The Dark”, while he also has four in “Piece Of Mind”, “Powerslave”, “Somewhere In Time “,” The X Factor “and” Virtual XI “). A relaxed -full of emotion- introduction, acoustics and vocals that take you on a magic journey. The song changes course after the first two minutes, enters dynamically, to relax again just before the first refrain where suddenly it raises speeds, having wonderful melodies and alternations so as to be led to its climax with the solo and its acoustic and melodic closing.

The fifth song of the album, is Bruce’s second collaboration with Adrian Smith and, at the same time, the second (and last) song that lasts less than 5 minutes. It is also the second that has the classic fast structure of MAIDEN. A song fast, pleasant, which live will be amazing. The melodies that flood the whole “Senjutsu”, are here as well.

The captain’s second collaboration with Janick is the sixth song on the album. The intro just warms you up, as the song in its course is very dynamic. Strange melody on the vocals, with several shots followed by the guitar, while Janick’s solo with its characteristic “dirt” is very good, from the highlights of the song. Many, many alternations here too. If there is one thing that the album does not lack, it is alternations and melodies. “The Time Machine” is a typical example.

If you like Bruce Dickinson’s personal albums, especially the “Accident Of Birth” period, you will love “Darkest Hour”. It is a ballad song, calm and narrative, with an introduction that takes you to a shore, while walking to the standards of “Man Of Sorrows” and “Orion”. It is probably one of the best songs of the album. Slow, melodic, atmospheric, traveling… a masterpiece.

And somewhere here, we enter the final trinity. The last three songs, lasting more than ten minutes each, all with the signature of the huge Steve Harris, from beginning to end. “Death Of The Celts” begins with “The Clansman” aesthetics. With the acoustic bass in the foreground. It evolves, alternates, develops in a unique way. In a way that only Steve knows how to do. The infinite alternations were present again. An almost pagan rhythm. A medieval song.

The second song of Harris’s final trinity and the third song he signs himself. Probably the best song of the album. Mystery, east, similar rhythms. A song that is not just “a song” but a cinematic soundtrack. It grabs you from beginning to end. It takes you on mysterious paths where the Pyramid of “Powerslave” is hidden, where the sand and the wind allows it to fade. I cannot describe exactly what feelings this song gives birth in me. Just let it captivate you. The flag of the Beast is waving at inconceivable heights here!

All journeys come to an end someday. This is how “Senjutsu” reaches its tenth and last song. “Hell On Earth” also begins with its own slow introduction, until it does what its name says. Unleash hell on earth from the speakers. The last song of the album closes the album properly. Epically. Again (no matter how tedious the repetition is) many and clever alternations. Many riffs, many melodies and themes to follow each other. An incredible interpretation by the Anti-Aircraft Siren…. An amazing choice for outro.

I thought that the very good and beloved “The Book Of Souls” would not be easy to be overcome. We have to say that “Senjutsu” came to prove things, even though in reality they have NOTHING to prove to ANYONE. To confirm the dominance of the Beast. To justify in the best possible way the fact that the Beast is sitting in the year 2021 comfortably on the Throne that rightfully belongs to it and nothing can move it from there.

When MAIDEN are in a good mood, it would be good for all their critics to take “how to do it” lessons. Because that’s what they did with their seventeenth album. They delivered lessons. Everyone is in great shape. On a writing, playing and interpreting level. The production -some may not like- but unquestionably supports the result. Bruce’s voice, where it needs to be protected, is protected and where it needs to be unfolded, it simply and beautifully does it. And Janick, once again proves why he continues to be a member of the Beast.

ATTENTION: “Senjutsu” is not an easy and “digestible” album concerning its compositions. It needs time and many auditions in order to reveal its greatness. If you are one of those who understood “A Matter Of Life And Death” and loved “The Book Of Souls”, then surely you will find greatness in here. Do not rush to judge it, listen to it again and again carefully. It will compensate you.

Of course, reference should also be made to the really beautiful cover, one of the best of the recent years, which adorns the album.

Closing, there is only one thing left to say: UP THE IRONS !!!