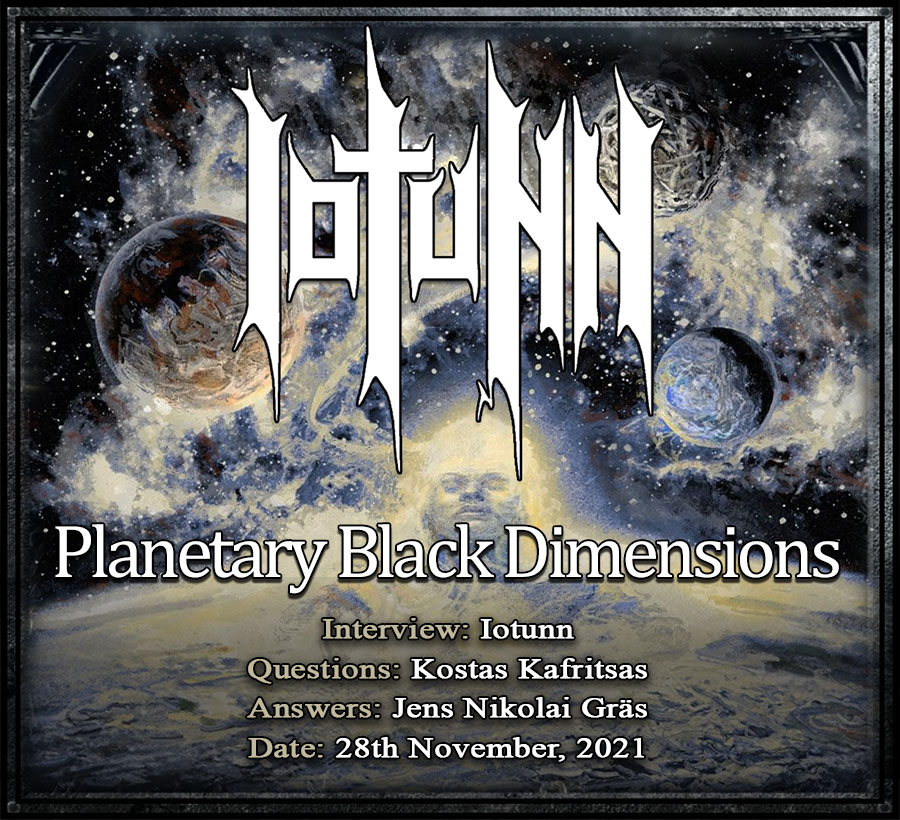 One of the most remarkable debut albums of this year is IOTUNN’s “Access All Worlds”, released in spring by Metal Blade. The band was highlighted by many media and metal fans all around the world and The Gallery had the chance to get in contact with the guitarist of the band Jens. In this interview we go through the history of IOTUNN, the music and lyrics concept of the new album and the future plans of the danish band.

– Hello Jens. Thank you in advance for the opportunity to have this conversation together. Since many people have just discovered IOTUNN through your debut album, could you please briefly share with us more about the history of the band?

Jens: Hello Kostas. The band has two historical phases. The early one started in 2009 by my brother, who was trying to figure out what it could be all about. Originally he wanted to start a prog/space rock band. Our current drummer, our former vocalist and myself joined him after a while. I started to bring up more heavy music so we were gradually moving more to the current situation. In 2013 we fully embraced the metal direction, although you could see that it was all over the place. However, it was an important step for us. As we were progressing, IOTUNN started to be formed as a band name and get shaped as an overall idea. This was back in 2015. “The Wizard Falls” mini album was released one year later and it was followed by few great concerts. However, we were still brainstorming about our direction and we were really in a need of a singer with a great charisma, someone who could express a great diversity of emotions, from beauty to sadness. We were looking for someone who would be able to create uplifting moods but also moods of darkness. Hopefully, we found Jón Aldará. We knew him from our former gigs, we sent him a demo and he answered to us that our music was too good to be ignored, so he joined. This was a milestone in our professional carreer. We just kept on working on the new album, finalizing it with a new entry in the band, our bass player Eskil. The original plan was that I would be the one playing the bass, but we knew that we could find a real bass player and that it could potentially add value to the dynamics of the album. In February 2019, just before the coronavirus shut down the world, we went to Gothenburg, Sweden, to meet Fredrik Nordstrom, in order to finalize everything. This is how “Access All Worlds” came up.

– A contract with Metal Blade is a great achievement. Could you share with us more about this collaboration?

Jens: We have a great respect for Metal Blade. The label has a history of high quality. Basically we had a plan A and a plan B. Plan A was that we find a label with good horsepower to support the album with a good promotion. Our back up plan was to do everything ourselves, but you know, we would be drowning and it would never work properly. We were really hoping that Metal Blade would respond positively. And they did it quite fast. They asked us if this was a temporary project or a band for the long run and after we clarified that we take it very seriously, we signed an agreement for three albums. We went with it carefully but a lot of things were based on trust. Communication is direct, on time, very professional. Metal Blade has so many connections and they do a lot of networking for us because they believe in us. They also have a good financial horsepower to get the album out and support a good promotion. This is important for us. They are good investors and good advisors so overall it is a great package.

– Could you please describe to us more about the process of the production of the album? I really like the fact that the sound has a 90’s feeling, that it is not this “digital – plastic” production we listen  lately from many bands of a similar to yours musical style.

Jens: The production process started with drums recordings, in the home studio of our drummer. Guitars were also recorded at our studio and re-amped from Fredrik. The combination of these aspects resulted in this outcome. We didn’t have references, we just gave a few notes to Fredrik to orientate him. For example, that we would like to have a 90’s drum sound, beasty rhythym guitars and lead guitars flying through the 70’s – 80’s. We have huge admiration for guitars’ tones from the 80’s and drums from the early 90’s – let me mention here “Conspiracy” by KING DIAMOND, fantastic drum sound – we really wanted this heavy rock base in our sound and production. We went two times to Gothenburg, mixing, compromising, discussing, cheering and all that stuff. We took the album at home, listened to it for two weeks and then we went back to Sweden for a weekend to finalize it.

– What are the main elements that form your musical direction? Some listeners and media characterize your music as progressive metal, however I believe that the atmospheric death metal elements are much stronger and visible.

Jens: Well, we simply play metal! Sometimes we make fun of it because we find it hilarious to name the genre we play, it is obvious that we don’t want to put it in boxes. It’s clear for us that our music is about a synthesis. We have an easygoing process, it is basically what we feel inspired of, we don’t care about the music style, we fo with it as long as it sounds good to us. At some level we guide ourselves, but this is really broad. We can definitely sort out ideas on a wide perspective of classic, heavy, doom, prog, death, and this is good to us. I understand that you start from the atmospheric death base, because of vocals and guitars, but what if the pitch gets higher in other songs in a new album? I need to admit that there are a lot of elements that are not visible in this album, as they are not yet expressed! Acoustic guitars in the style of ULVER for example… We can also make longer, faster, heavier songs. As long as we believe in it and develop our own creative process, then this is the way we express ourselves. But I definitely agree with the base of the melodic death elements you refer to as I obviously hear many nordic touches here and there.

–  Moving now to the lyrics of the album, I notice that there is a common thread and a good fit between music and lyrics. I perceive it as an exploration journey, a lifetime story about the individual and humanity. What is your source of inspiration?

Jens: Well, I am glad you notice this combination. IOTUNN music and lyrics should be mirroring each other. When we gave the music to Jón, we briefed him that it would be great if the lyrics match the atmosphere of the music. He had some inspiring ideas and we ended up with an interesting sci-fi story. The fascination of it and ideas about utopias and dystopias, the anxiety about the future and the visualization of it, all these themes were very inspiring to us. We wanted to raise universal questions, no matter the time of the history. The inspiration for us can be very different as we are 5 different individuals. Jón for example is educated within the field of biology, our drummer’s academic background is into history, my brother and I are more into philosophy, our bass player is educated in science of the states, so we wanted to combine these fields and explore what life is about from a holistic point of view. Of course it is not possible to cover it in one album, but there are some good parts we highlight. Nature aesthetics and universal musical expression, experiencing them through all our senses, are the source of inspiration. This process is a matter of trying different variations. Life is about connection with yourself, who are you really and what can you become, what are your infinite opportunities.

– Referring to “Access All Worlds”, I wrote: “The new IOTUNN album is a musical masterpiece of extreme Metal. A planetary musical journey in wonderful sound colors, in other worlds, non-terrestrial, but certainly real. They are the magical worlds of mind and soul that await the right element to unlock. Exactly this element is the new, impressive IOTUNN album.”. Do you believe that your album has something exceptional to speak to the listeners?

Jens: Your description is really beautiful. It depends whether you are asking the optimist or the pessimist inside me. If you love to explore, to wonder about life and philosophical dimensions and matters, this album has certainly something to speak to you. The optimist in me admits that we are all philosophers. I know that philosphy uses discipline and that’s very complex, it has to do with complex systems. But in principle we are all philosophers and this begins when we first open our eyes, the time we are born on earth. It’s on one hand good for me if people just listen to the music, it is fine and welcome. The bottom line is that it is about music. However, if there are also people who listen to it and grab the full perspective, ask themselves the very basic questions in life, find the time to breathe and feel inspired to push the button to stop or move forward in their lives, then this is even better.

– I was wondering what might be your future plans regarding the promotion of the album, since there are many limitations due to the pandemic…

Jens: I would say that the album promotion is going very well, the question is how we will be able to keep the momentum. Hopefully we will have some tour announcements and this will give to us more boost. Every project will take energy and time, that’s for sure. For us it is important to connect with people. And when the world opens up again, we are sure that we will be very busy with concerts. Therefore, during the summer and for the rest of the year, we have already started the process of recordings of our second album. Right now it is very important that we utilize the time properly and make significant steps to finalize parts of the second album. We are already pretty far, we have 8 strong songs and we go on…

– Jens, I would like to close this interview with a personal question. Which albums have you recently listened to?

Jens: Today, I was listening to the latest album of ENSLAVED. I love them. Lars-Goran Pterov has recently passed away, so I put once again ENTOMBED album “Left Hand Path”. It’s extremely heavy. “Heartwork” from CARCASS played recently as well. It is one of my old time favourites. And also “The Sham Mirrors” by ARCTURUS. In between I hear a lot of classical music.

– Thank you so much Jens. Big congratulations for your great album once again!

Jens: I want to thank you for reaching out and doing this conversation. Lately we meet great people, everyone is so nice with us and informed, this is amazing! Take care!

Amorphis – When The Gods Came

Omnium Gatherum – Over The Battlefield Of Greece!