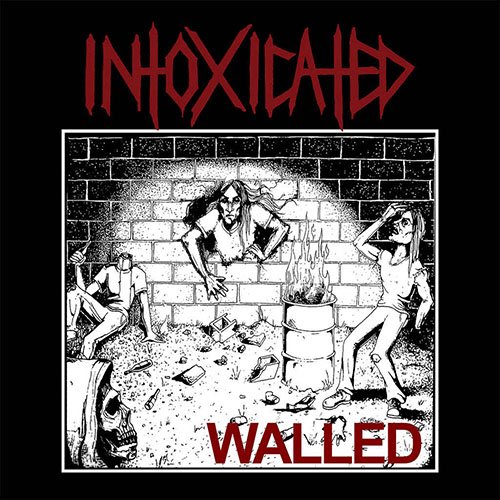 INTOXICATED from Florida were founded in 1992, they released 4 demos, of which the production of “The Drain” was done by their good friend Chuck Schuldiner (WHAT DO YOU MEAN who is Chuck?) and Trevor Peres of OBITUARY made a guest appearance. To be exact, when OBITUARY took a long break, Donald Trudy used to jam with INTOXICATED and appear with them on stage. When Andrew WK, being a big OBITUARY fan, wanted to approach Donald Trudy about his band, he ended up recruiting all the INTOXICATED members and this is the reason they disappeared for so long. In 1997 they released their only full length album “Metal Neck” and they return in 2020 with the EP “Walled”.

With such references what would one expect to listen? But, of course, fiery Thrash Metal with a lot of Death Metal elements and some crossover moments. The band is not fooling around and offer us on the plate some old school thrash riffs, chaotic -almost Death-like in some occasions- vocals by Eric Payne and a very well-ordered chaos. There are of course some weak moments, but, in general, are overthrown by the explosive total. When this almost 20 minutes long EP ends with the last notes of “Yuck” oozing out of the speakers, it leaves behind a feeling of triumph but also rage.

Long story short, after INTOXICATED were baptized in Tampa’s holy waters and drank from the everlasting elixir of Florida’s scene, they returned with a very good, but short, specimen, showing us they are still alive and kicking. Those who like the raw, sweaty and violent Thrash/Death metal, “Walled” will give you goosebumps.

Flotsam And Jetsam – Blood In The Water