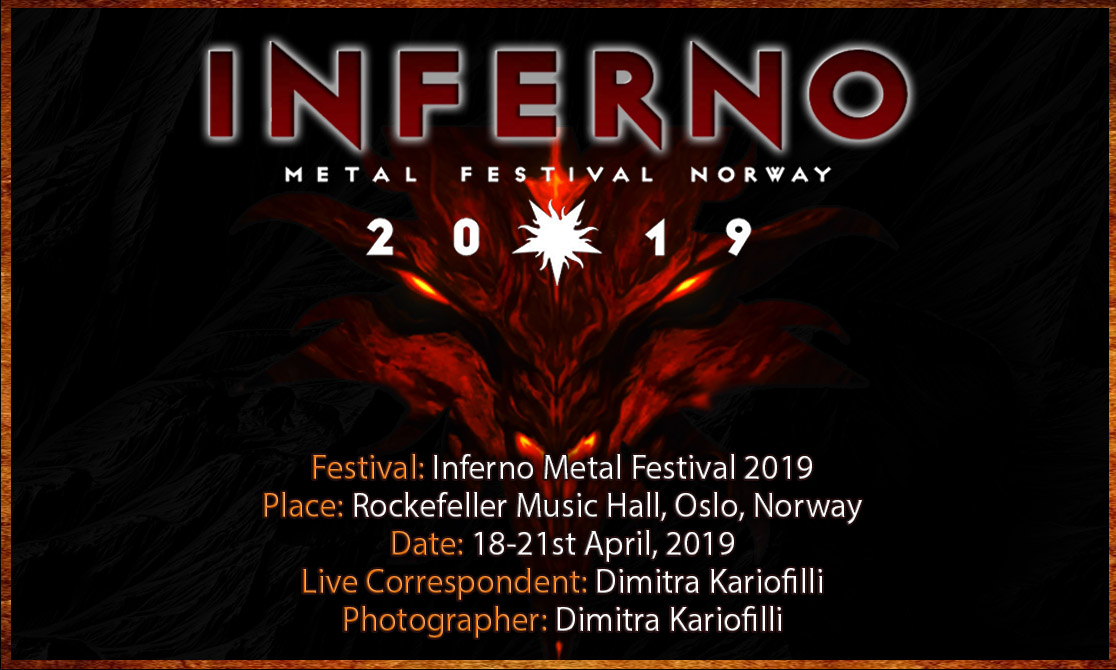 This is how Easter time is celebrated in Norway, as a great metal family! After having a walk into the homeland of Black Metal I took a moment to worship MAYHEM’s lair -which is now called “Neseblod Records”! I felt the vibes of that unholy place from the first second I’ve reached the basement….definitely a place where all metalheads should go, not only for buying vinyls and other record stuff but also for feeling the sense and darkness of this unique place and era!

So….where to start and where finish with this year’s INFERNO Festival? There were so many surprises, I do not even know which one to mention first! But lets get things right from the start…

DAY 1: The first ones to hit the stage were the Black/Thrash metallersAURA NOIR. Their frontman (also known by the nickname “Aggressor”) swiveled around the stage in his wheel chair full of self-confidence while “Blasphemer” (guitars) led us intothe “Black Thrash Attack”! The atmosphere changed very quickly taking a psychedelic form as the Swedish Doom metallers WITCHCRAFT took over. Their singer, Magnus Pelander,surely is an unusual performer to see on stage, as he is filled with emotions. The first day’s headliners? The almighty DIMMU BORGIR! No introduction needed for Norway’s giants of course! The stage was set with torches and “Shagrath” stood at the center of the stage holding a golden ram’s skull! While he was singing, the smoke rose below his legs along with a big wall of fire! A very satisfying show by DIMMU BORGIR, however I’m sure that they have had better days…The band said goodbye with “Mourning Palace” being the encore and that signaled the end of the first day for the fest!

DAY 2: That was my favorite day, I dare to say! It was full of surprises! VOMITORY, this Swedish Death Metal band, smashed the stage! In 2018 they’ve announced that they had officially reformed. They offered us an excellent performance with tons of energy and pure Death Metal! After that, the moment I had been waiting for finally arrived! Next on stage were the Black MetallersMGLA. The band from Poland does not need any fancy movements or visual effects on stage. Only a black leather jacket and their music was speaking for itself. Everyone’s attention was on stage. LONG LIVE MGLA! And of course, the second day’s headliners: HYPOCRISY! Peter Tägtgren’s vocals were still strong and raw after so many years. HYPOCRISY rewarded the dedication of the fans who were gathered early in the center of the scene, offering them pure Death Metal and plenty of mosh pits! They were totally worthy of being the headliners for the second day of INFERNO festival.

DAY 3: I must admit, when the name ofIMPALED NAZARENEwasadded to the festival, I was not really sure what to expect because of their frontman, Mika Luttinen and the stories about him! “Who’s your Daddy? That’s right Motherf@ckers, you know who your Daddy is!” Mika screamed his lungs out and gave us the finger! Not many things to say here. Next came GAAHLS WYRD. Gaahl wandered the stage looking at us with his scary and persistent face, almost hypnotizing us…the premiere of their new song “Ghost Invited” left me speechless as Gaahl’s clean vocals took us by surprise! It was time for some true Norwegian Black Metal, with TAAKEon stage and Hoest unleashing hell, while being on a great form with his characteristic corpse paint-skinhead! Onwards for today’s headliners BLOODBATH. Nick Holmesentered the stage, wearing a suit perfect for the occasion, with a fresh bullet wound drawn perfectly in the middle of his forehead! Highlight of the day: A random person on the barrier waiving around a sign that said he was volunteering to sing “Eaten”, while Nick, having noticed it, politely refused. When the time came for the final song of the night, he helped that person on stage, but not before threatening him that he would kill him if he f@cked up! Needless to say that this guy was well aware of what was going to happen and just nailed the song, throwing his hoodie to the crowd like a rock star!! Inferno was loving it! That marked the culmination and end of the third day!

DAY 4: It was Easter Sunday here in Norway and what a great day it was for desecration from the most suitable band, ARCHGOAT!! Raw, powerful and ruthless sound from Finland’s best was a great beginning indeed. With a more theatrical point of view, GARACH ANGRENentered the stage…two platforms rised simultaneously, elevating their keyboard player and their axe man almost five meters high. There was too much attention given to the theatrical aspect, but not to the music unfortunately. Not my cup of tea. Thankfully, 1349came next and saved the day! Pyromaniacs of the world united! Everything was on fire. Fireworks, flame throwers, sparks, smoke plumes shot up between the band throughout the set! It was really hot in there, I felt sorry for the people in the front row. Last but not least, OPETH made their appearance. Even ifMikael Åkerfeldt with his sweet lullabies “sent us for a nap” a little bit early, yet I must admit that he is a very charismatic person. He had excellent communication with the crowd between the songs, he was making jokes and that made me realize that this “superstar material” he is made of, keeps his fans loyal all this time. Day 4 ended here.

P.s: Since INFERNO took place in a venue with three scenes, I did not have enough time to see all the bands playing and, unfortunately, there is not enough space to mention all of them! Those are some of the bands from all the scenes that are worth mentioning: URFAUST, THE RUINS OF BEVERAST, RAGNAROK, CULT OF FIRE, ALTAREGO.