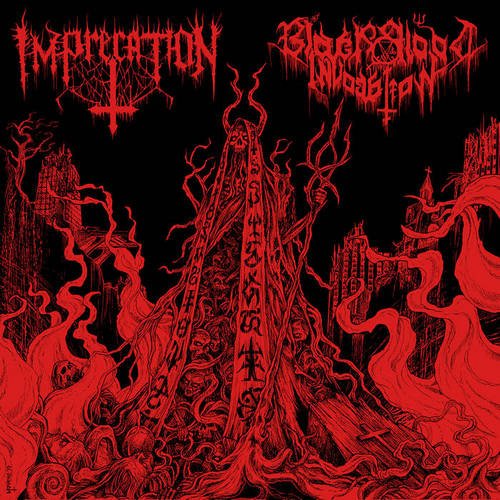 2019, besides the many important and remarkable releases in the extreme metal music, it gave us one of the most intense and blasphemous split releases that have ever been released, with the satanic partnership of IMPRECATION and BLACK BLOOD INVOCATION. The title of the split, “Diabolical Flames Of The Ascended Plague”, and the red devilish cover prepares you for the barbarity you will experience while listening to the album. IMPRECATION was formed in Texas in 1991 and after seven years they split up in 1997 to reunite in 2009 and continue their abyssic journey to this day with very good releases in War / Death Metal, the latest of them being their great recent album “Damnatio Ad Bestias” which was released also in 2019. BLACK BLOOD INVOCATION were formed in 2014, in Athens and after the awesome self-titled demo and the amazing” Atavistic Offerings to the Sabbatic Goat “EP in 2017, they spit their Death / Black Metal poison into this new split and remind us that they are one of the best Greek Metal bands at the moment.

The A side belongs to the Texan sadists IMPRECATION, who participate with an outro and three violent compositions of real and rotten Death Metal. The classic blastbeat outbursts and the slow Death / Doom parts grab you by the throat and hit you on the wall with rage. Growl vocals from debts of the underworld and furious guitar riffs with the deadly smell of underground diffused in the songs as they remind us the compositions they wrote back in the 90’s. The only negative is the fact that the bass is a bit low but you forget it, when you hear their aggressive rhythms and the high quality songs.

The B side belongs to the awesome and furious BLACK BLOOD INVOCATION with one intro and their three amazing songs. The eerie screams in combination with the bells, opens the gates of a hellish Death / Black Metal path with “Evocation of the Alla Xul”, and “The Burning Effigy of Moloch” while the split closes with the anthem “Atazoth Nexion”. What initially begins with a mid-tempo rhythm and with the keyboards creating a mystical atmosphere that hypnotizes the listener until the sudden outburst of the characteristic massive and aggressive character of BLACK BLOOD INVOCATION.

“Diabolical Flames Of The Ascended Plague” is an underground treasure and I personally consider it as the best split release of 2019. Both bands did their best by giving us some of the best compositions they have ever written. An album whose character and atmosphere requires listening only on vinyl and this reminds us to support the underground as everyone started this way.