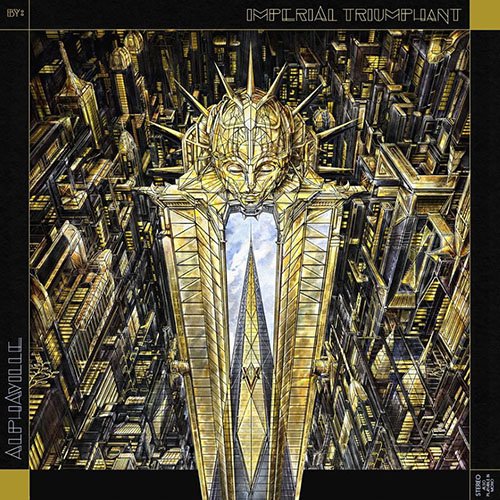 Black Metal is a difficult genre anyway. A part of Metal that is not addressed to the general public, even in its most commercial forms. It is a genre that if you have the patience to deal with and you do not obey whichever taboos can be touched, lyrically and visually, by Black Metal artists, you will probably love it. Essentially, these are the choices. You will either love it or hate it and move away from it.

If the most common Black Metal is difficult, then its Avant-garde form, its marriage to Jazz fusion trails, what could it be? Well, at least it will define the choices above, you will either love it or hate it.

IMPERIAL TRIUMPHANT is a unique case of a band. Being members of Jazz fusion bands, they come with this fourth release, “Alphaville” to confirm that there is no ceiling in experimentation, there are no “forbidden” genres that one can marry with Metal, even in its most Extreme form. And not only do they prove it, but they prove it emphatically. Through the nine compositions of their new album, unfamiliar techniques, strange sounds, tangled elements, vocals and melodies from a dark dystopian future or perhaps the undressing of a well-hidden secret present, are unleashed. A dark, suffocating atmosphere that does not let you breathe, hope…

A release that not only will not go unnoticed, not only is not digestible for everyone, but an album that shook the waters as much as the psyche of those who have dealt or will deal with it. Neoclassical Black Metal, Avant-garde / Technical Black / Death Metal, were married to give this result. You need many auditions, as many as the discoveries you will achieve, in this masterpiece of the Avant-garde Black Metal subgenre. The secrets of the album are many, hidden behind masks. Like those of its creators. Discover them.