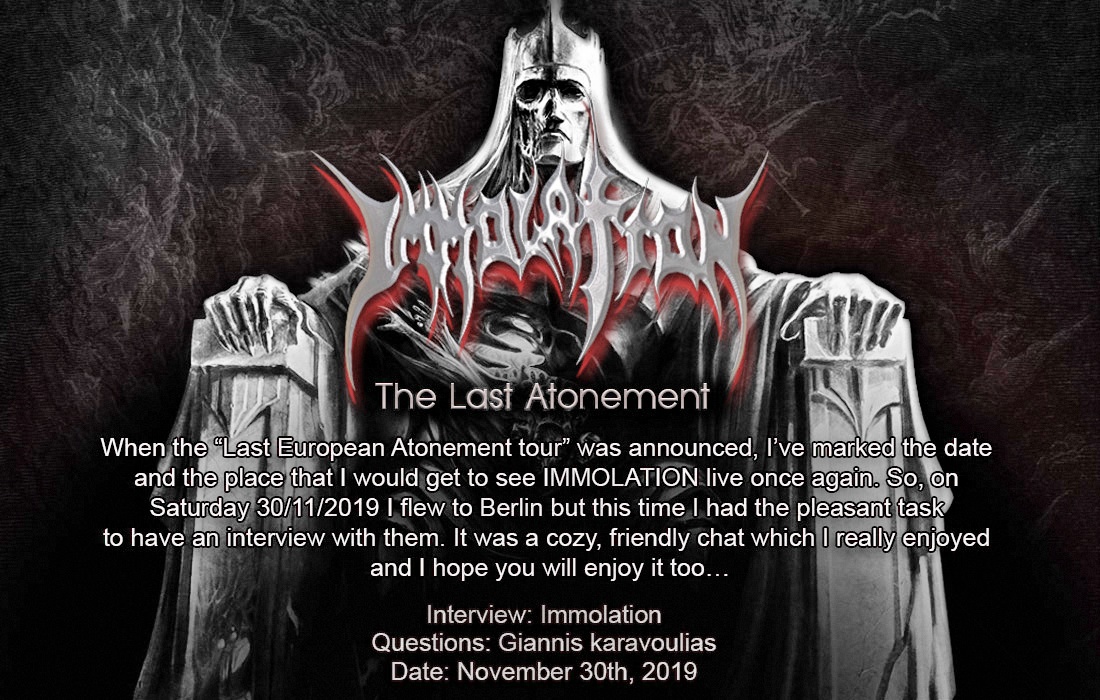 First of all I would like to thank you for kindly agreeing to be interviewed! You are very important to the extreme metal genre! So, we find you here in Berlin on the final show of the year for the “Last European Atonement Tour”! This has been an extremely busy year for you, has it not?

Ross: Yeah it has! Τhis is our 98th show tonight in Berlin and tomorrow it would be 99 shows for the year.

Ross: The first show of the tour got cancelled so it would have been 100! So we have been busy, we did pretty much a world tour. We have been to Central and South America, we did a full US run, we did a shorter US run, we did a bunch of European festivals from May right through August, we did a full run of Asia, Australia, Japan and 41 days in US and Canada with BLOOD INCANTATION. And of course we are doing the last European run for “Atonement” right now as we speak with RAGNAROK, MONUMENTS OF MISANTHROPY and EMBRYO. So yes, we have been busy!

From all I can remember this has been the busiest year for you for a long time!

Ross: Yeah it really has, probably since 1996 or 1997!
Rob: We also covered a lot of new ground which is a really good thing for us, it is something we want to do. In 2017 we did only a few tours and in 2018 we wanted to do more but it did not turn out as we wanted, so we decided to plan this year out before we got to work on the new album. Before doing that, we wanted to go out and headline for some more “Atonement”! So, it was a great year and we are excited for that, it has been fun!!!

What has changed to your personal lives so you can be more devoted on touring? I mean, from all I know you had every day jobs and limited time, had you not?

Rob: Yeah, for the past one year and a half or two we try to do this full time! It is a struggle though but we try to put all our efforts on this and so far so good! It is a challenge but we are getting close!

Can you describe the “joys” of touring around the globe? What were the highlights of this tour so far?

Rob:  The whole year has been a highlight, doing Japan and Asia for the first time, revisiting some places like India was phenomenal, so it has been good. The fact that we did so big a US and Canada tour with BLOOD INCANTATION the entire thing felt like a highlight the whole year, so we have been out doing our thing and it has been good. It has been nice to visit so many places in such a short time!
Ross: The people’s response has been great, considering that this is the end of a circle for this album! We have done a lot especially in Europe. This is our 4th tour in Europe for “Atonement”, that been said it has been surprisingly good for us. The US tour did really well, so we are set pretty nicely for the next record and for 2020!!

You have been around in the genre for more than three decades and still going strong!! What is the motive that keeps the fire raging?

Rob: We are just passionate about music and about what we do! We enjoy it a lot. I think we are still ambitious to take our music as far as we can with this band, it is what we have been doing for most of our lives pretty much. We enjoy the passion about it, if we did not like it we would not had been here right now!
Ross: We love what we do, we are [email protected] fortunate to be living the dream, travelling the world and meeting cool people, while sharing our music with people around the globe. The most exciting thing about this year was that we got to go to some new places. Like Bob said, seeing new fans and new parts of the world that we had never seen before we realized “wow we have got fans here”! That was a cool thing for us to experience you know, we just enjoyed the whole journey, it has been phenomenal for us!

As a leading act of the Death Metal scene, what is your opinion about it nowadays?

Ross: I think the scene right now is very strong and I think part of that is because of these younger, newer bands that are on fire like BLOOD INCANTATION, DEAD CONGREGATION, FULL OF HELL and others, that managed to capture the spirit of the “early” scene that we are part of and it took a long time to happen. It took 30 years! It is nice to see that bands are  paying homage to the earlier days of the scene, the darker more sinister Death Metal, the stuff that we were part of, it is so cool to see that right now! Those are the bands that are taking Death Metal into the next generation and kind of bringing it to the future! It is exciting to still be here and see that, while being part of it! Those bands are pretty good people, very talented and well grounded. They are intelligent, they are sharp and motivated and it is very promising, looking forward to see how it evolves!

Now let’s talk about the long awaited upcoming album. What shall we expect from it? Can you give us any details about it?

Rob: Basically it would be more of what we do! All we can tell you is that we are taking all of what we did before, a step further! We are always trying to do the best we can with every album, there is no plan you know, not much of a plan on how to sound, we just keep on developing as a band. As writers we are trying to compose the best we can at any given time. So that is all we can do. OK, it is going to be dark, it is going to be heavy, it is going to have the same feeling but taken to a different level…you always try to push yourself further, keep the essence of the band but do something fresh too!
Ross: It is a difficult question to answer when you are early in the process like we are. We only have 4 songs and maybe 2 of them are solid right now, so it is very early to tell! It is going to be an ongoing progress until it is completely finished and then we will look back and say “ok, it hit the mark” or “it didn’t hit the mark”, that is the best I can explain it! We always try to hit the mark, we don’t always succeed, with “Atonement” I think we king of nailed it, which is kind of rare for us to say it, but I think it was received really well and we are extremely happy about it which is our first! (smiles) So we shall see but, like Rob, said it is going to be definitely dark. So far that is what we are aiming for!

It has been a while since you’ve visited our country! What is your opinion about the Greek fans and the Greek bands in general?

Ross: [email protected] awesome man, we had a great time in Greece!
Rob: We are hoping to get back there with the new album! We just go where the booking agents send us…we hope next year we can get back to Greece! We are looking really forward to that!
Ross: The fans have to realize that we are not the ones picking the countries to tour. The agents are the ones who say: “hey, this is where you go!!”. Of course we would like to hit Greece on every tour if we could, because our experience there was phenomenal!! Our shows in Athens and Thessaloniki back in 2012 were amazing, the Greek fans were amazing, we have a lot of friends, ROTTING CHRIST are good friends, DEAD CONGREGATION are good guys too.
Rob: Some other guy that always travels to see us too, I can not remember his name! (smiles)
Ross: You know we have some good friends over there, the scene is very passionate too, it is a shame that we don’t come there every [email protected] year!!

Once again thank you for your time! Would you like to send a message to THE GALLERY’s readers?

Rob: Thanks for the support, we are looking forward hopefully to come back to Greece and some other countries that we have not visited for a long time, we will get the new album done and that will get us to these places!!
Ross: Thank you guys for the continual support for the past 31 years, we really hope to get back there! Until then….