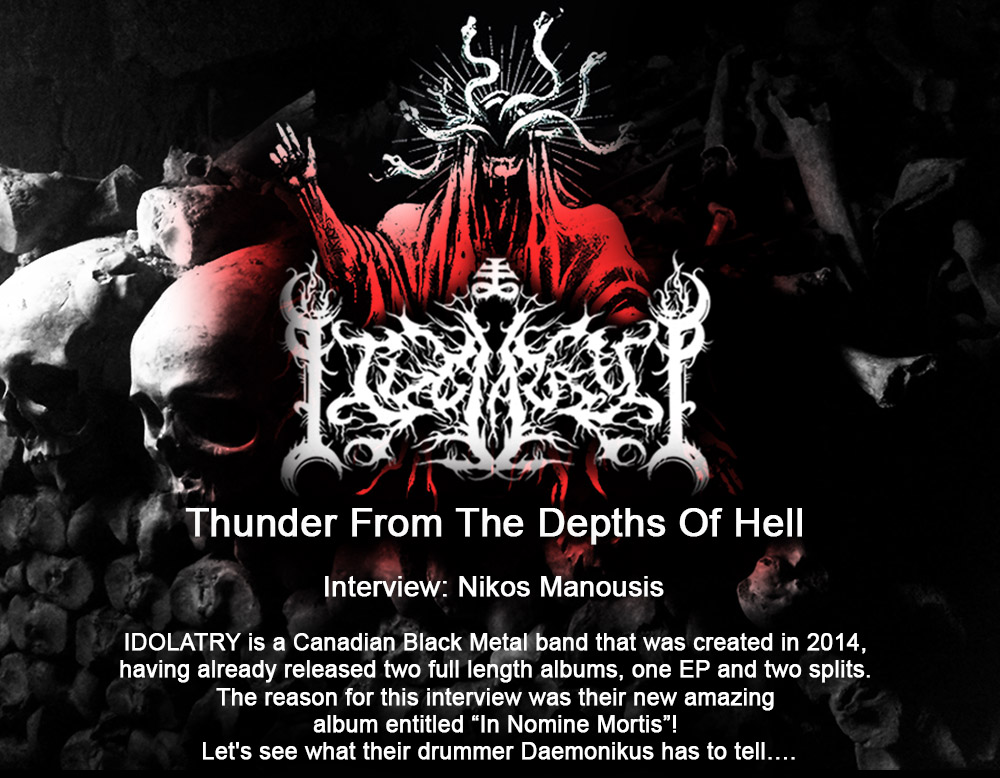 So can you give us first a short biography of IDOLATRY for the people who don’t know yet?

Daemonikus: Idolatry was conceived from my own personal desire to play old school, corpse painted black metal but with an emphasis on intellectualism and abstract thought. A few phone calls to some friends and the music started flowing pretty quickly. A number of member changes did happen in the first couple years, but the line up has finally settled and is certainly at it’s height right now.

What is the meaning behind the name ‘Idolatry’?

Daemonikus: The word “Idolatry” simply means “the worship of idols”, but in an Ecclesiastical (xtian) context, it references worshiping anything above god. Our specific reference then is to worship ourselves, our intellect, our logic, our ability to reason, above god. Since humans created the gods, we are our own idols.

How would you describe your sound and what is your main musical influence?

Daemonikus: We have a heavy emphasis on dynamics in our writing style. Some songs are faster, others are slower, and some have several different paces throughout. We are obviously influenced by a lot of the 90s Norwegian and Finnish black metal bands, as well, but not to the extent where it becomes mere mimicry.

What was the feedback from the black metal community concerning your new album “In Nomine Mortis”? Fans, magazines, zines etc

Daemonikus: We have heard entirely great things about it, which is really cool. All the reviews and fans have said it is our best release, thus far, so we are very appreciative of all the high praise it has been receiving!

“In Nomine Mortis” is your first record with your new singer Ba’al Berith. His vocals are very raw and harsh. In some songs I’ve also noticed that he used more than three different singing styles. Do you think this is also an extra credit to the new album?

Daemonikus: Ba’al has been an excellent front man for us. We wanted to approach the vocal style differently than on our previous releases; the birth of a new voice. He and I spent several days and weeks working out different vocal styles for certain parts and experimenting with ways to emphasize different words within specific parts of a song. It really added a lot of depth and dynamic to the tracks, and has been highlighted as one of the standout elements on the album by fans and reviewers. His ability to shape his voice in such ways really makes the vocals consistently interesting. It adds a chaotic element without feeling disjointed or monotonous.

The production of “In Nomine Mortis” is great! Raw but not overly muddy! Can you tell us more about that?

Daemonikus: Yes, after we recorded everything, I just sat with it all and played around with levels for the different layers that we had. The engineer who recorded us did a great job in capturing the natural tones, especially on the drums. Apart from a few edits here and there, the performances are very organic. We purposely did not nit pick the metronome, nor did I use any triggers on my kick drums, and no post processing was done on the guitars at all. Working within that and without worrying about “perfection” allowed the recording to have good enough isolation to enable everything to be heard, but still leave some dirt on the knees!

What are the lyrical themes IDOLATRY explore with their music?

Daemonikus: There are a lot of different themes that have come into play over the years, but for this album it is mostly concerned with concepts revolving around Death – both in the physical sense, but also in the philosophically. The concepts of transformation, personal evolution, the importance of critical thought, but also acknowledging one’s own anger, hate, and frustration, and strength through those processes.

Daemonikus: Speaking for myself, I grew up in an evangelical home, and through that I was exposed to very ignorant versions of other religions and the occult. Once I started down my own path, I eventually turned to Satanism, but only as a philosophy or ideology. I have no spiritual beliefs. I find the idea of a god or devil to be little more than a placebo where a lack of understanding is present. However, such a narrative does make for a great analogy or poetic interpretation in music and art. I do enjoy reading a lot about the occult, but my personal focus is more on intellectual individualism with an emphasis on Left Hand Path/Satanic ideology.

What’s your opinion about the Black Metal scene nowadays?

Daemonikus: Musically, the black metal scene is thriving. There are many excellent bands that are carving out their own vision within black metal as an art form, and I hope that continues. Bands like Panzerfaust, Mgla, and Nightbringer are doing great things with their music. What I find disappointing is the harshness that once permeated the music, lyrics, and personalities of many bands (not the ones mentioned) has been watered down in a lot of cases and the musicians are just happy-go-lucky guys that are far more about “peace and love” than they are about the hate and destruction that black metal ought to be known for.

Do you have any touring or live show plans to promote your new album?

Daemonikus: We have played a couple out of town shows in the region here, and those went extremely well. We are sharing the stage with the legendary Immolation in October alongside Blood Incantation and Begrime Exemious (an excellent hometown band that you should also check out).

We’re looking for opportunities wherever they may be. A spring tour would be excellent if the cards line up.

What should we expect from IDOLATRY in the future?

Daemonikus: We have an unending desire to create more music and further our presence wherever it may take us! We are always open to new alliances, associations, and appearances!

Thank you very much for the interview and I hope one day to see IDOLATRY’s live ceremony in Greece! A final message for your fans?

Thanks for the questions! If you’d like to see Idolatry make it across the pond, make sure to spread the word to all the promoters and festivals in Europe!