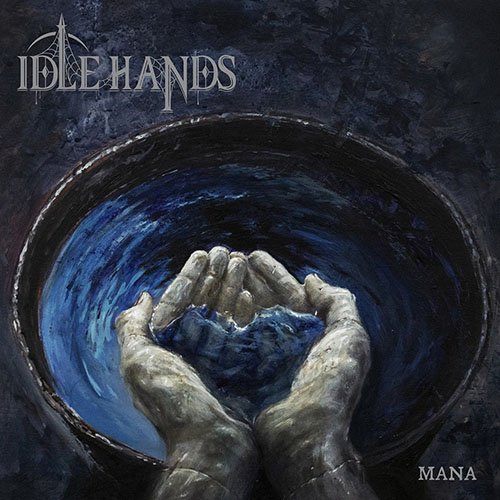 IDLE HANDS were born a few years ago from the ashes of SPELLCASTER, with the participation of three of their members. There is, however, a very small resemblance between the two bands. IDLE HANDS’ music cannot be described as Heavy Metal. In fact, it’s Metal from times to times, and to give you an idea, THE SISTERS OF MERCY’s “Vision Thing” is much more Metal than “Mana”. The quartet plays an amalgam of Gothic Rock with Heavy Metal elements that are direct and catchy with songs that catch your attention and stay in your memory.

The band’s EP in 2018, “Don’t Waste Your Time”, was a sample of what would follow here, in their debut album, “Mana”. The songs written by IDLE HANDS compose a fairly strong ensemble. Their influences and style, such as the CURE and the already mentioned THE SISTERS OF MERCY, combine to an excellent effort. “Nightfall” and “Dragon, Why Do You Cry?” are two very typical samples of the whole album and its style, melody-wise, with magnetic lyrics and vocals. The album’s first single, “Give Me To The Night”, a brilliant radio track that opened doors to the band to be heard more.

IDLE HANDS have a classic sound that could really raise them very high. I would sincerely like to see this happen. Unlike most albums, when I first heard it, I put it straight into replay. With each hearing, something new was revealed. “Mana” is an album that exudes a sweet sadness / melancholy feeling that brings back memories of another era. To me, it was like traveling back in time, when I was making my first discoveries in the Rock and Metal universe and I was trying to find my footsteps. Although not innovative, the music and lyrics have been written with passion and anyone who takes the time to listen to them, will easily recognize it.

In conclusion, IDLE HANDS may not have released a perfect album with “Mana”, but it is definitely a very good debut album. A bold, complete release, “Mana” is an album that will satisfy its listener. It is clear that the band will create something really wonderful in the future, and although this did not happened with their first attempt, it is important to watch these developments.