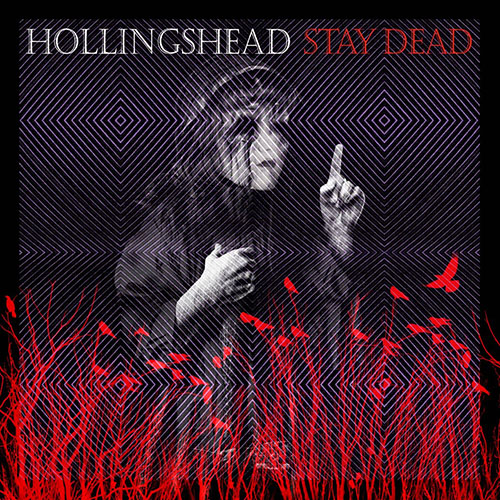 The Swedish HOLLINGSHEAD is the newborn spiritual child of the multi-talented organist Carl Westholm, known from his contributions in bands like CANDLEMASS, KRUX, AVATARIUM, ABSTRACT ALGEBRA, MEMENTO MORI, CARPTREE and more. He started this new effort 2 years ago when he joined forces with the drummer Fredrik Haake Haake (BADGE, MELDRUM, THE VANITY SET, GOD IS MY CO-PILOT, MOA, SIDEBURN) with the bass player Johan Niemann (EVERGREY, THERION, MIND’S EYE, XORIGIN, TEARS OF ANGER) and started seeking for the right man to take the place behind the microphone. After 2 years of searching, a friend of his, told him about some mysterious guy of the Swedish underground named Gidon Tannenbaum (MOTHER KASABIAN, OBRERO, SPACE ELEVATORS, BLACK WIZARD’S, WRECKLESS MACHINE), they found him and gave him the job.

In case you are wondering who the guitar player is, you can stop now, since there is no one here no matter how strange this may sound. The band follows prog rock paths with ‘70’s influences based on heavy bass and various kinds of keyboards while the drums also do a great job filling the sound. The organ which is used in most of the times adds a dark gothic atmosphere so the lack of guitar, which, I confess, took me a while to find out, is not so decisive after all, to the contrary, it helps so the final result sounds different from the piles of similar releases and makes it more special for today’s standards.

To the record now, all 8 songs that are included last up to 8 minutes each, but fortunately (for me) are not what we call “chatty” or include unnecessary virtuosities or exaggerations like it used to and roll nicely. A great help for that comes from Gidon with his special voice skills who contributes in creating atmosphere either by singing melodic or in more harsh lines. I should note here, that Carl also does backing vocals completing the job when necessary. The opening track “And While Waiting For The Sky To Open” gets straight into the point and is one of the top tracks along with e psychedelic tune “Lights”. Next is “Through The Doors Of Time (Dreams of the Indie Khaleef)”, a very technical and theatrical number, that reminded me of DIRTY GRANNY TALES and then for me “The Valley” and the closing “Travelers Prayer” are also essential tracks.

It comes natural that there are everywhere influences and elements from the bands that Carl has played all these years, mixed with a lot of ELOY, HAWKWIND and the rest of the prog monsters of the past. The production is very good, modern and clear but at the same time it gives you the feeling that they want, the bass and the keys work together properly and the singer is good and much talented but also with lots of room for improvement. But, together with him, everybody else in the band should work more in order for the final result to reach even higher levels of quality, become richer and less predictable so that the element of surprise will be bigger for the audience.

In all, this is a very good first effort, that it needs a few playbacks to unleash all its glory, well worth carrying the names of those involved and should definitely be checked out from the fans of this particular area of music.

A final closing trivia is that they took their name from the movie “The Secret Life Of Walter Mitty” from 1947 in which Dr. Hollingshead was played by Boris Carloff.