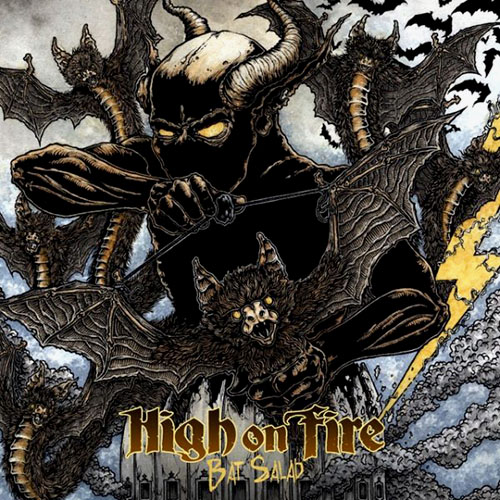 HIGH ON FIRE were founded in 1998 and come from Oakland, California. They have released eight full length albums and many more EP’s, singles, splits and live recordings. They are mixing Sludge, Stoner and Doom with great success and their live performances are well known for their energy and intensity. “Bat Salad “ is their most recent release, recorded for the Record Store Day 2019 in a limited vinyl edition only of 2.700 copies in a translucent vinyl with black and green splashes. It contains 3 tracks.

In A’ side we can find “Bat Salad” a BLACK SABBATH influenced instrumental song but with the typical speed and filter of HIGH ON FIRE. In B’ side there are two cover songs of two bands that have influenced HIGH ON FIRE both in style and attitude. The first is “Into The Crypts Of Rays” of the almighty CELTIC FROST, where  the highlight is the tremendous vocals by Matt Pike and the second is “Don’t Bother Me “ by BAD BRAINS, an intense and full of energy synthesis.

When an established band tries to cover another band, there are two things needed to be considered. Firstly not to go very close to the original song, because then what’s the meaning of making a cover and secondly, whatever changes are made, they should be kept within the main style of the band, otherwise listeners will be confused about the original recording and the meaning of all this covering. HIGH ON FIRE succeeded in both parts and seems that they have enjoyed making these recordings. Who is going to buy this EP? First of all vinyl collectors and of course HIGH ON FIRE die-hard fans. I’m sure that in the future there will be a lot of bands that will cover them with the same spirit and same devoutness as these California guys do.