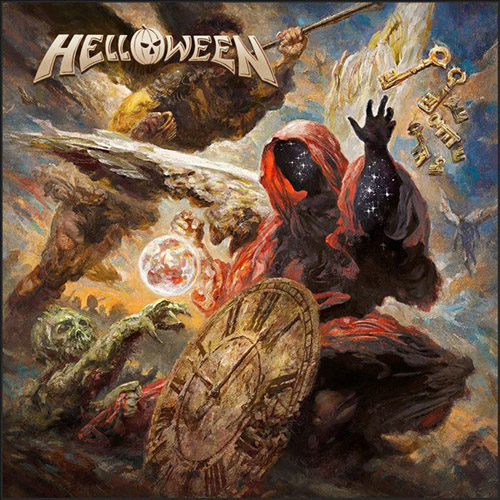 This album carries a special weight, perhaps more than it should actually. The bar is very high and the expectations of a large part of the people who follow HELLOWEEN are at a similar level. However, the mere fact of the “reunion” of most of the very first members of the band together with its existing form is something very important in itself. Everything seemed well on its way a few years ago, with the extensive “Pumpkins United” tour, with 70 concerts taking place for more than a whole year, all over the world. Andi Deris, Michael Kiske, Kai Hansen, Michael Weikath, Markus Grosskopf, Sascha Gerstner and Dani Löble joined forces and after the unprecedented success of all their concerts, they decided to keep alive the big dream of many of their fans.

The whole metal community is therefore waiting with impatience and joy for the 16th studio release of the German leaders of Power Metal and one of the most important bands in metal world.

Let’s go to review “Helloween” in detail, making an attempt, apart from its overall evaluation, to rate all its tracks, one by one.

In conclusion, HELLOWEEN’s new album is decent, it has excellent moments, it reminds in some parts of the band’s glorious past, but it didn’t come to redefine musical paths, nor to stay in our memories as the Germans’ supreme creative moment. Any comparison with the first three monumental albums of HELLOWEEN is simply useless.

I would also dare to write that the album is one level below the four “Master Of The Rings”, “Time Of The Oath”, “Better Than Raw”, “The Dark Ride”, but that doesn’t mean in any way that it is a weak album. HELLOWEEN have given huge musical samples in the Deris period as well and I have to look at things overall and comparatively.

However, considering the complexity of the project, the dynamics that have developed in the band in the last few years and a natural attrition from 2005 onwards, this work is very interesting. It has a very good flow, a wide musical range and a corresponding diversity of compositions, emotional weight, flawless execution and . . maybe it’s just the beginning!