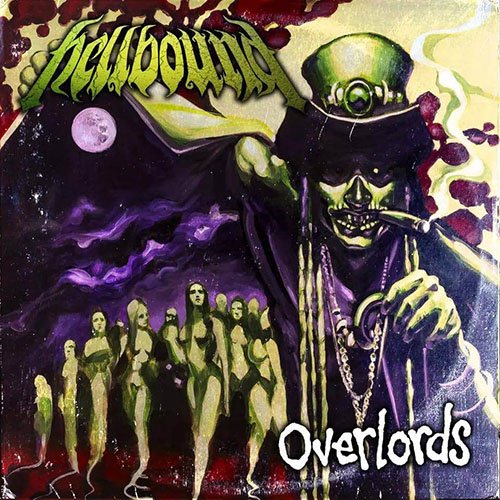 HELLBOUND were formed in 2011 at Umea (co-citizens with NAGLFAR, THRONE OF AHAZ, ANCIENT and CULT OF LUNA among others), a student town in Northern Sweden and European Cultural Capital of 2014. They released their first album “Through Hell and Muddy Waters” in 2012 and almost eight years later it’s time for them to release their second one, “Overlords”.

HELLBOUND are describing their music as “Hillbilly metal, Swamp Metal and the bastard child of Rob Zombie and Dolly Parton” and regard “blues, Country music, Captain Morgan Spiced God and absinth” as their main inspiration. The truth is that they play a mix of Industrial Metal influenced by WHITE ZOMBIE, MINISTRY and NIN with a lot of cinematic B-movies samples, choral choirs and groovy guitars. This sounds quite interesting but it actually isn’t, since there is a lack of compositional originality, plus, personal stigma and the blending of several genres requires a kind of knowledge. Anders Egberg, singer of Epic/Doom metalers SORCERER (check for their upcoming album) is featured in all backing vocals and choirs while another guest is Ralph Scheepers of PRIMA FEAR on lead vocals at “Screaming In The Dark”.

If you like the combination of industrial hybrids in a muddy production and a Southern American approach, accompanied by bourbon consumption, then you will find something interesting in” Overlords”. The rest of you check it out and make your own conclusions.

Imperium Dekadenz – When We Are Forgotten

Abaroth – Emissary Of The Void