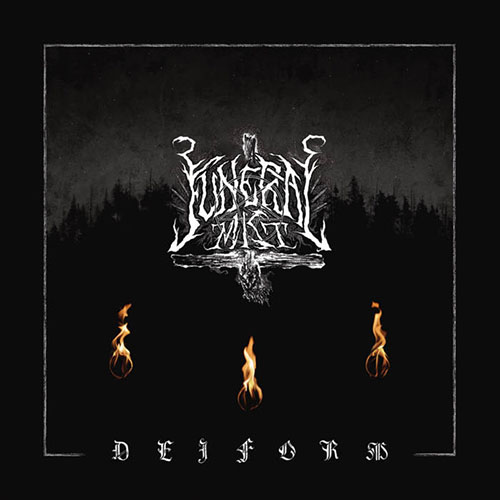 FUNERAL MIST is a band that has an amazing back-catalogue, not needing any special promotion. The fans of the Swedish Black Metal scene have been following them for years, enjoying their continuous masterpieces in the orthodox Black Metal sound. Of course, here we are dealing with Arioch’s project, better known as Mortuus, the singer of Black Metallers MARDUK. Three years after the amazing “Hekatomb”, they return with another great release under the title “Deiform”.

The new album is slightly different from its predecessor, so while “Hekatomb” was an aggressive Black Metal album in its entirely, with “Deiform” FUNERAL MIST delivers us the most “atmospheric” album of their career. An atmosphere within their sick orthodox Black Metal borders.

The album starts with “Twilight of the Flesh” at slow rhythms, with choirs and a “war atmosphere” lingering, constituting the ideally introduction to their sonic manifesto of the revelation that follows. Further on with “Apokalyptikon” and “In Here” in the familiar band’s violent musical fields, with the “perverted” riffs and the overwhelming performance of the octopus-drummer Lars Broddesson (ex- MARDUK). Then comes one of the sickest and most gripping songs written in 2021, one of the best in FUNERAL MIST ‘s career, entitled “Children of the Urn.” Emblematic, melodic, and aggressive at the same time with a seductive atmosphere built by a choir with children’s voices, which is combined with Arioch’s demonic voice, offering us a masterpiece! This could be a continuation of “Living Temples” song from 2009’s album “Maranatha”.

Here I should mention the work that has been done on Arioch’s vocals and performance throughout the whole album, a real SHOCK since they are the best I’ve heard on a Black Metal album the past years. He has also incorporated clean vocals in some parts in addition with classic raw ones, creating with this way a variety that gives a unique character to the songs. Back to the sweeping Black Metal rhythms with “Hooks Of Hunger”, while the following title track with its melody and the mid-tempo rhythm is the vehicle with which Arioch confirms what we mentioned earlier about his vocals. Finale with “Into Ashes” which, in its nine minutes, hits us mercilessly, being a collection of the record’s elements.

FUNERAL MIST with “Deiform” manages to achieve the impossible for many bands in our time. The band has released for the fifth time in its career an amazing album, offering us moments, such as the finale of the self-titled song. Art creates emotions and this is what the Swedes achieve through their dark and aggressive music. An album that needs careful and continuous auditions, so as someone gets into its unique music character. Also, those of you who have not been familiar with this project, it’s time to do it and “Deiform” is the ideal album to start. So, 2021 ended with a great release by the undeniable kings of orthodox Black Metal!

Grima – Will Of The Primordial