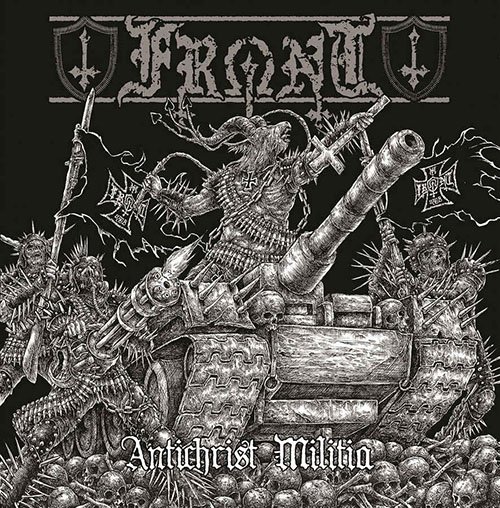 Four years after their decent debut “Iron Overkill”, FRONT from Finland return with their stormy new Mini Album “Antichrist Militia”. The band was formed in 2015 with two of their four members (Revenant and Von Bastard) participating in the also remarkable Black Metallers SACRILEGIOUS IMPALEMENT.

The cover of “Antichrist Militia”, with the tank and the skulls looks threatening and prepares the ground for its war content and the attack that you will receive in its almost 23 minutes of playtime. The sound of FRONT can be described as a mixture of MOTORHEAD and VENOM with War Metal. They describe their sound as War Thrash Metal and I think that this is the ideal term as the songs are mostly in Thrash Metal speeds and forms, with Death / Black Metal and Punk influences leaving their touch. FRONT’s violent war machine is backed by aggressive riffs, demolition drums and angry vocals with their sound now being more straightforward compared to their debut and sounding like the Thrash / Punk version of MARDUK (“Panzer Division” area).

“Antichrist Militia” is one of those records that you are always looking for in order to have a good time drinking your beers and headbang ruthlessly. Pure punky extreme metal without unnecessary innovations and experiments that takes you back to the 80’s and is the ideal soundtrack for the battlefield.