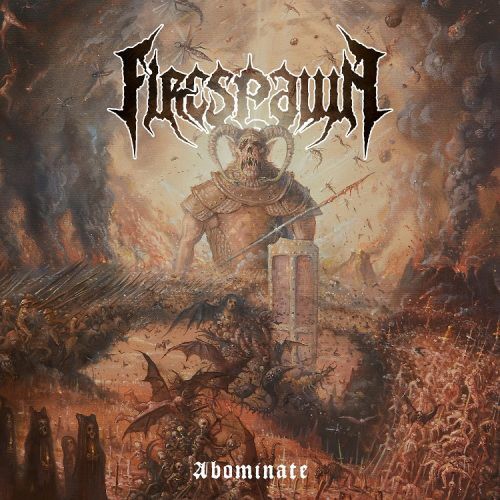 Two years after “The Reprobate” album, FIRESPAWN’s supergroup returns with their third album “Abominate”. Note that FIRESPAWN is consisted of: L-G Petrov(ex- ENTOMBED, ENTOMBED A.D.) on vocals, Fredrik Folkare (UNLEASHED) on guitars, Alex Friberg (NECROPHOBIC) on bass, Matt Modin (NECROPHOBIC, ex- DARK FUNERAL) drums and Victor Brandt (DIMMU BORGIR) on guitars. It is more than obvious that this band has members with huge experience and history in the Death/Black Metal battlefield, so it was a big surprise that their first two albums were not so good, to say the least. The answer for that is quite simple; they just tried to reproduce the sound of the early Swedish Death Metal, a sound that was born in the early 90’s with amazing albums and bands, but which soon got lost after it got trapped in repetition and lack of creativity. In their third album, FIRESPAWN show us that they know this fact, trying now a different approach with a very good result, both for them and for the fans.

The truth is that at first I didn’t have big expectations with the idea of listening to FIRESPAWN’s new album. I was expecting an music experience similar to bands I’ve heard before like CARNAGE, ENTOMBED, GOD MACABRE etc. In contrary, when the album began to play it was obvious that I was wrong, as I was now listening to a very good Death Metal album, worthy of the names of its creators. The opening track “The Gallows End” erased my negative feelings immediately, even if it has this classic Swedish Death Metal sound, it also includes several elements from the American Death Metal scene and to be more specific, from the legendary MORBID ANGEL.

It is a very nice opener with melodies and a DIMMU BORGIR-ish atmosphere. Now, if the first song made us suspicions about the MORBID ANGEL influences, the next songs “Death and Damnation” and “Abominate” (reminds me a bit of the song “Where The Slime Live”) the suspicion turns into certainty. Imagine MORBID ANGEL of the ‘Domination’ era mixed with the classic Swedish Death Metal sound, the result you take is ‘Abominate’ from FIRESPAWN indeed. The rest of the album continues in the same musical direction and style. Besides all the above we must also mention that L-G Petrov has done a fantastic job at vocals, which in this particular record are the most brutal (has a little David Vincent feeling) of his career compared with what we have heard from him all these years. The production is also excellent and the album is released with a fantastic artwork.

With their third full length album, FIRESPAWN manage to escape the mediocrity of the recent past and present us the best record of their career so far. The American Death Metal influences (Florida scene) are perfectly combined with their Swedish roots and the result is quite impressive, to say the least. They sound refreshed and lead us into some serious and merciless headbanging with their new stuff. FIRESPAWN finally released an album worthy of their musical capabilities and members history.