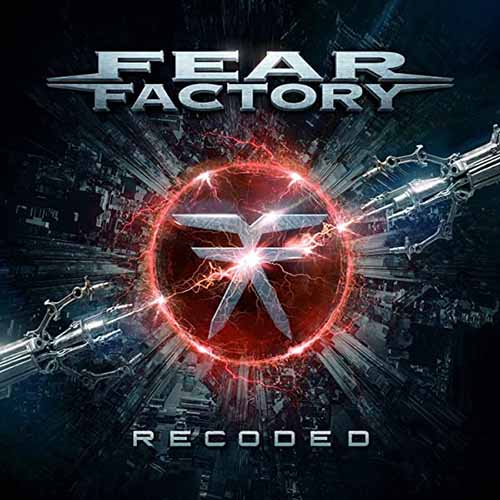 And now it’s time for FEAR FACTORY to close the Burton era with their first remix album after 25 years! It was preceded by the legendary mcd “Fear Is The Mindkiller” of 1993, where the leading Industrial band of the planet, then and now, the Canadians FRONT LINE ASSEMBLY had remixed six tracks from their debut “Soul Of A New Machine”, followed by 1997’s very bad “Remanufacture”, with awful remixes in dub, rap, drum n bass, techno style of the “Demanufacture” songs. With all this, I want to emphasize that albums with electronic remixes in (extreme) Metal bands are a double-edged knife and, besides the quality of the original songs, it is very important who does the remixes and in what style. So, where does “Recoded “belong? Fortunately, among the very good albums of the genre, because both the original material – the whole “Aggression Continuum”, their previous album of 2021- was quite good and the new versions are tremendous!

I believe that the element that allows FEAR FACTORY to succeed, where other bands of the genre have failed, is the use of FRONT LINE ASSEMBLY’s Rhys Fulber. Not only because he has decades of experience in the Industrial scene, but he is also the producer of most of FEAR FACTORY’s albums and, also, contributes all the electronics/keyboards into their sound. So, he knows what makes these specific songs good, when the electronic element dominates.

I’m going to surprise you, but I think ‘Recoded’ is better than the album it comes from! The beats vary from song to song, Dino’s disassembled riffs have more originality, the electronics are much better than the originals, and Burton’s vocals are delivered in a way that doesn’t seem so conventional (though still predictable). These changes give the songs more energy and make them more original and dynamic. Rhys Fulber appears on three of the eleven tracks. His specialty, of course, is taking original tracks and pushing them into the Industrial Metal kingdom. His best track is ‘Path To Salvation’ which is a remix of ‘Purity’. This is also the track with the most EBM/Dark Electro elements the band has ever done, and the background reminds quite a lot one of Rhys’ bands, NOISE UNIT. I should emphasize here that Dino also made a guest appearance in this band last year! “Hatred Will Prevail”, which is his remix of “Monolith”, is also very good.

Thing is, Rhys has some competition this time, as the record features another world class artist, Zardonic. Zardonic, is a Venezuelan keyboardist, DJ, composer, producer and remixer, mainly known for his heavy electronic dance music. His contribution here is outstanding, as he is responsible for five of the tracks on the record. While Rhys’ songs have the hard beats of industrial metal, Zardonic brings out more of a stormy dance beat. He is also excellent at taking guitar parts and cutting/pasting them into forms that are, at least, as good as the originals, if not better! He is also responsible for the album’s second best song, ‘Worthless’ (a remix of ‘End Of Line’). ‘Worthless’ is a beautifully crafted Trance/Edm track, using only Burton’s clean vocals! The last three remixers have one song each, and while they’re not as good as Zardonic and Rhys Fulber, they’re still better than the original songs! TYRANT OF DEATH offers us the heaviest track, ‘Empires Fall’ (remix to ‘Collapse’), Rob Gee probably the most chaotic, ‘Hypocrisy Of Faith’ (remix to ‘Manufactured Hope’) and ‘Recoded’ (remix on ‘Recode’) by BLUSH RESPONSE is the closest to the Industrial/Noise paths.

For me this album is so good, that I would like to suggest that this could be the new era of FEAR FACTORY! Dino doesn’t like using drummers anymore anyway, and Rhys is basically a permanent member in their camp. Why wouldn’t the band go all the way in the Industrial Metal genre? It could be produced and mixed by Zardonic and that way we would have an album that sounds fresh, while being classic FEAR FACTORY, at least enough to make old fans happy too! In fact, three years ago, Dino formed a purely Industrial Metal band called DIE KLUTE together with members from DIE KRUPPS and LEATHER STRIP. So why not now? Anyway, I’m sure that won’t happen and what makes me ‘tremble’ is the choice of the new singer. I hope Dino does the right choice because another Burton is hard to be found… Until then, all of you, just enjoy the massive record ‘Recoded’!