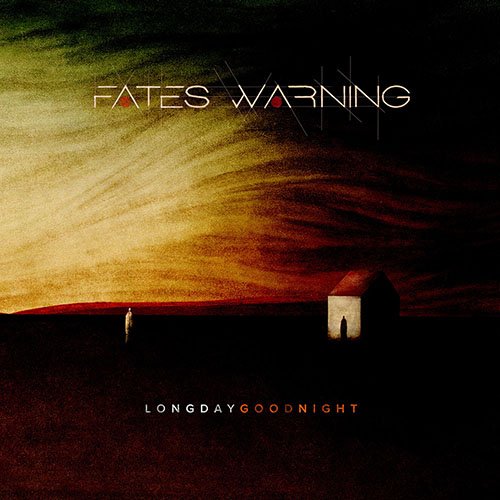 With Matheos acting as the producer for FATES WARNING’s 13th album, the musicians tracked their parts in their various homes/studios in Los Angeles, San Antonio, Texas and New Hampshire while Alder, who lives in Spain, recorded in a small studio in Madrid during the coronavirus pandemic. 13 songs with a total running time of 72:22 is quite an endeavor and with the heavy history that their name carries in mind, the progressive metal pioneers had to look their fans in the eye and deliver a high-quality album (as they’ve always done) under harsh and complicated circumstances. And they have largely succeeded in doing so…

The album starts with a dreamy, ethereal mood. Jarzombek and Matheos are setting the set, Adler delivers a catchy vocal melody and a few seconds later the band blasts throughout the spectrum. Full, punchy guitars, elaborated drumming and bass, tasty soloing, crystal clear clean sounds over heavy but organic distortions, multiple vocal lines flying all over the stereo field, calling and responding to each other. All the elements of the Fates Warning sound are here and the band takes it from where they left it four years ago with the magnificent “Theories of Flight”.

In your face riffing in a straight forward 4/4 with a lot of good melodic old school american power-prog? Jim Matheos started composing the songs for the album following the 2019 tour with Queensrÿche and I believe I’m having a taste of their common touring experience listening songs such as “Shuttered World”.

Polyrhythms, clean and distorted guitars, excellent drumming (one of the best sounding snares I’ve ever heard), dynamics, interesting song structure, complexity delivered with surgical precision. The prog-metal forefathers Fates Warning are here doing what they do best. They might not be out to explore new sound territories but they’re rather drawing a map of all the paths they’ve already explored in their career without losing relevance or compromising their integrity and they’re passing it out to their younger audiences.

7 October 2020 “Now Comes the Rain” was released as a single, the second of the album after “Scars” which was out late August. In my opinion it’s a good song, just an easier to digest, a more radio-friendly moment of the album.

Guitar harmonics followed by a beautiful melodic line delivered by Adler’s voice and warmed by Matheos’ dreamy arpeggiated chords, transposing gently and effortlessly through different keys is the opening recipe for this track. A major environment with a minor shadow, the music and the lyrics perfectly accompany each other to this lyrical highlight of the album when the mood dramatically changes: Bass, guitar and drums start an improvisation-like dialogue. The hard-panned left and right distorted riffing that follows, combined with Jarzombek’s neurotic drumming builds up tension, leaving the bass guitar with its 8th note pattern hanging on in the middle, just like an anchor holding a ship to its place until Joye Vera lets go and the chorus explodes into space. A beautiful solo leads the way to the outro and that was an example of the excellent song structures that the band is capable of creating: complex and dynamic but never forced.

The sixth track starts with a string section and it’s the first time the band uses one in a recording. Its presence is discrete throughout the song which I’d say follows the “Now comes the Rain” style. There’s a simpler, more straightforward approach. Ray Adler, who was heavily involved in the composition of “Under the Sun”, comments: “It was actually a small section of another song on the album. I don’t think Jim had any vocals in mind for the particular part, but one day he sent me the guitars and asked me if I thought we could possibly make an entire song of it. I said let me work on it. Ironically, I had a melody in my head that I had been singing for a couple of months, I didn’t know what I would use it for, but it was there”.

“Scars” was the first single of the album and a song that promised a lot to Fates Warning’s diehard fans. There’s an aroma from the “FWX” days and a sound approaching the generally heavier “Theories of flight”. If the one side of the coin is “Scars” and the other’s “Now Comes the Rain”, Adler’s right when he says “We tried to give the listener a host of different things to listen to, as opposed to an album where every song sounds the same”. It’s by now clear to the listener that “Long Day…” is an album that tries to reach a wider audience with progressive moments, heavy in-your-face tunes and more minimalistic and radio-friendly tracks. We’ve reached the middle of the album by now and the question that comes to mind is “will they achieve a successful final result, well balancing all the aforementioned elements?”.

I imagine Jim Matheos wondering who would be the most adequate engineer to mix and master the band’s new and somehow heterogeneous material. Jens Bogren had done a marvelous job with “Theories of Flight”, but that one was leaning more over the “heavy” side of the genre. Now another man would be needed, perhaps someone more versatile sonically… And that man would be Joe Barresi. He has worked with bands such as Tool, Queens of the Stone Age, Alice in Chains, Soundgarden and other more extreme acts such as Isis and Enslaved and everyone in the industry knows that he has the chops needed for such a demanding studio work as the new Fates Warning would be. With all these in mind the song starts and I’m like “Yes, that’s the sound of some very pissed off alternative guys from back in the 90’s” but it’s still Fates Warning and the sonic transformation is impressive, like the sound of their reflection on a mirror. What a pleasant surprise…

If a journey of reflections started with the previous track it continues with this one, and behind the rhythm section’s driving wheel we have now mister Gavin Harrison of Porcupine Tree. Was it the drummer with such a distinctive style and playing that formed the sound of the song or was it the style of the composition calling for a drummer like Gavin Harrison? Electronic elements are present in the track, delayed clean guitars, minimalistic vocal oriented parts. I’d say that “When Snow Falls” is the most psychedelic moment of the album, a post-rock moody composition with lots of open space and beautiful melodies.

12. The Longest Shadow of the Day

A jazzy opening with Matheos and Vera improvising over an ostinato and Jarzombek building sandcastles on his set. Three minutes later we find ourselves in a dark distorted universe where celestial bodies made of riffs and melodies orbit a drumming sun. Then we’re on the surface of a planet where an aurora borealis made of chorus and tape delay lights up the horizon. There Adler’s voice sounds like the wind howling over deserted, cold planes while guitar solos fly like comets in the starlit sky. My favorite track of the album.

The critically acclaimed “Theories of Flight” album was a progressive metal masterpiece. Four years later every Fates Warning fan wonders if the band will be capable of surpassing themselves delivering a heavier, more complex, more… everything album. But while we all had “Theories…” in mind, Matheos and CO were preparing something different, aesthetically wider. Tracks like “The Destination Onward”, “Alone We Walk”, “The Way Home”, “Scars” and “The Longest Shadow of the Day” are Fates Warning in the constellation of “Theories…”. Heavy progressive, no-excuses metal with “The Longest Shadow of the Day” being a successful attempt to truly surpass themselves musically.

With “Shuttered World”, “Liar” and “Glass Houses” we have the bold, bigger-than-life american power-prog kind of approach and while “Now Comes the Rain”, “Under the Sun” and “The Last Song” is a more easy listening no-surprises experience, “Begin Again” and “When Snow Falls” is a very interesting and sincere transformation of the band’s sound.

I’d say that “Long Day Good Night” is an epic storytelling venture. It might not be a concept album thematically, but sonically every track has its certain place and time of existence and as a hole the album breathes energy and vitality. The band has definitely succeeded to push forward by opening wider their sound pallet, although since a track like “The Longest Shadow of the Day” exists in this album, I can’t help but hopping for the band to explore their sound looking specifically towards that direction.

In the age of digital distribution platforms, the question that finishes my review is: Will I buy / should you buy FATES WARNING’s “Long Day Good Night” album? Yes. I believe that it’s an absolute must for my collection. Don’t you?

After The Burial – Evergreen