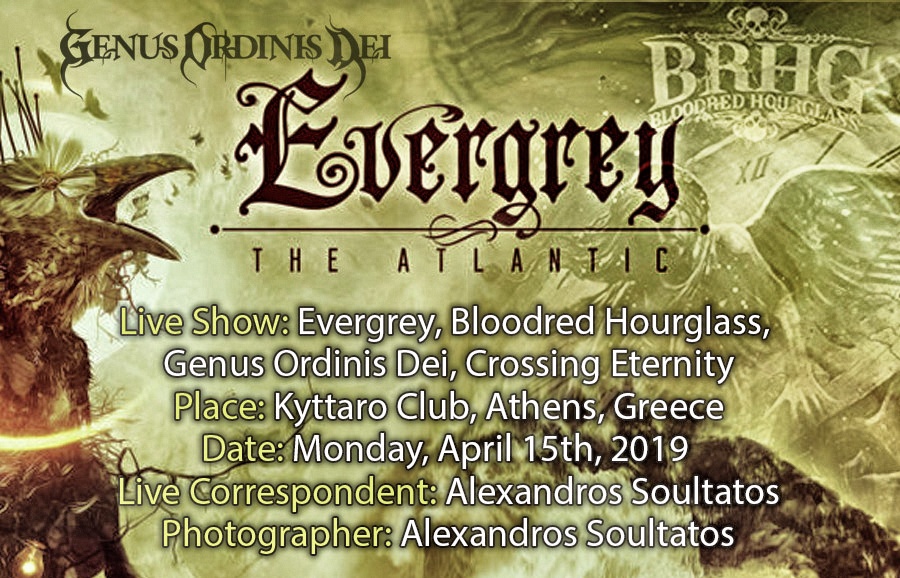 A wonderful concert in Athens with EVERGREY from Sweden and BLOODRED HOURGLASS from Finland giving everything they had got (I will not refer to the other bands because, unfortunately, I arrived late at the gig’s venue and did not see them). That night, there were -quite unexpectedly- many fans at “Kyttaro” Club!

Let’ s have a look at the bands now…

BLOODRED HOURGLASS: Young in age, the blood still boiling in their veins, the group from Finland had just released a very good album, “Godsend”. They had already been on tour for the previous two months; despite that, they were fantastic on stage! A mix of AMORPHIS (“Elegy” era) plus IN FLAMES (“Reroute” era) plus a little bit of MACHINE HEAD….et voilà! We were very lucky to see them live at that moment in our country, as they are one of the most rapidly ascending bands of the genre! Great!

Then it was EVERGREY’s turn. A band that has been active since 1995, armed with a brand-new album, named “The Atlantic”, they were the ones that came, saw, made our jaws drop down and conquered! A truly unique band! Fully professional at what they do, they showed us why they are regarded as one of the top names of the Progressive/Power Metal scene! Thomas Englund is a singer highly respected by the metal community and everyone understood the reason that night (among the many bands he has participated, he has also been a guest singer at NIGHTRAGE’s “Sweet Vengeance” and “Insidious” albums). By any means, it had been a wonderful night!

It is worth mentioning that, after the end of the show, all the bands got off stage to take photos and discuss with  the fans while, at the same time, they signed on anything that a pen could write on! That was a very down-to-earth moment, lacking any sign of arrogance!

An unforgettable night of “another everyday Metal Monday” in Athens!