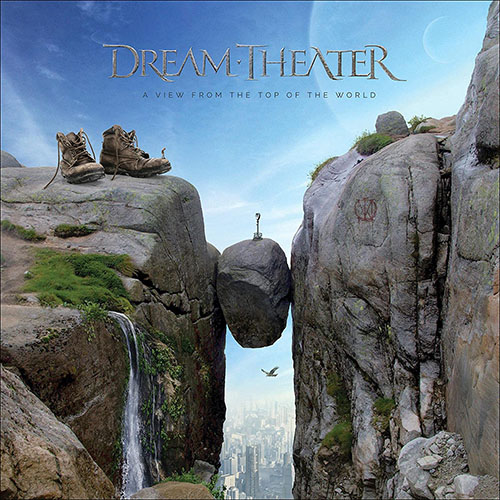 Fifteenth full length for the titans of Progressive Metal, and it could not have gone unnoticed. Samples of the band’s busy members’ moods had already been made known with the releases of John Petrucci’s personal album, as well as the recent LIQUID TENSION EXPERIMENT album earlier in the year. After so much exercise, it was only natural that our ears and eyes were glued to the news of the release of “A View From The Top Of The World”.

The DREAM THEATER chapter is quite familiar to me. “Images And Words” and “Metropolis Part II: Scenes From A Memory” are, to my humble opinion, among the top albums in the history of the music we love, less for their technical excellence, but much more for their emotional and generally holistic weight as musical acts.

To be honest, in the last decade I’ve begun to see the band in a different light. Portnoy’s departure marked a new era for the group, depriving them of an important composer, and this was quite evident in their three previous albums, which, while technically remaining at a very high level, nevertheless stopped speaking to the heart, being more verbose than they should have been, dividing this way part of their audience.

But let’s go straight to “A View From The Top Of The World”.  I’m holding the digipack version of the cd in my hands and I find the whole stylistic/graphic direction quite special. Moreover, while their approach usually makes me feel nervous, you know, with all those dystopian – technological type covers, this time I can admit that the use of the natural landscape adds simplicity, peace and tranquility. Inside the 16-page booklet one can find an alternative cover artwork, lyrics, various similar beautiful graphics and rich content in credits and acknowledgements. Top class.

On the musical part now, I would notice that the Americans give us a clearly more “digestible” album than the previous “Distance Over Time”. The album starts with two of its best moments, “Alien” and “Answering The Call”. Breaking into the opener “Alien” with a strong riff, addictive melodic parts with guitars and keyboards blending harmoniously, while James LaBrie presents a steady, a bit predictable but overall supports the whole direction quite well. Solo in a galactic tone, beautiful gradual climax and thus DREAM THEATER give us one of the most convincing opening tracks of their latest albums.

“Answering The Call” seems to be a track taken from “Octavarium”. Fantastic melodic and light-hearted introduction, the verses are great, the bridges add beauty (Rudess and Petrucci “paint”) and the performance in the chorus lifts the song as a whole. Perhaps the most “commercial” (in a good way) track on the album.

“Invisible Monster” is a mediocre moment. Aside from Petrucci’s beautiful solo, it sounds monotonous, predictable and tasteless. Pretty safe for DREAM THEATER, and its chorus is just plain boring.

Things are back in shape with the ten-minute “Sleeping Giant”, where Jordan Rudess proves why he is among the top keyboard players in the world. A catalytic contribution from the first to the last note of the track, beautiful alternations, finally a LaBrie who doesn’t get tired and who is 100% “in the song”. This here is the top composition of the album in my opinion.

I would describe “Transcending Time” as lively, with a beautiful chorus and a nostalgic tone, definitely one of the album’s good moments, although it doesn’t have anything particularly special that has that “wow feeling”. Again, something pushes me back to “Octavarium”, maybe that’s why I liked it so much.

The simplicity of “Transcending Time” is followed by the complexity of “Awaken The Master”. Dynamic riff lines, excellent drumming from Mangini and generally a mood for jamming of high technique and quality. The only thing that is noticeably behind is LaBrie’s performance, which I find monotonous and quite “basic” for the song.

For the end, we couldn’t expect anything else than a long-winded composition. The title track is a very good moment, and includes everything. Technique and appeal to emotion alternate artfully through dynamic grooves, high class jams, loose acoustic parts and nostalgic melodies. Although in parts I can admit that it makes some small “dips”, in general the level is very high.

In conclusion, the new DREAM THEATER album has an undoubtedly positive mark. In my opinion, it is the best album of the band since Mangini’s arrival. The album is approachable in its entirety, and wins you over if you have patience and a willingness for repeated listens. But what I would like to point out by putting an additional marking, is that the band seems somehow to have stopped experimenting, in other words, following the already existing path and success recipe, and this is a symptom at least in their last four albums. Moreover, although LaBrie makes a good effort and has some excellent moments throughout the album, he stands in some cases a bit “behind” the rest. However, we are in general talking about a very good release and prog fans will not be disappointed in any way.

Post Views: 43
Tags: 2021, A View From The Top Of The World, Dream Theater, metal, Review, TheGallery