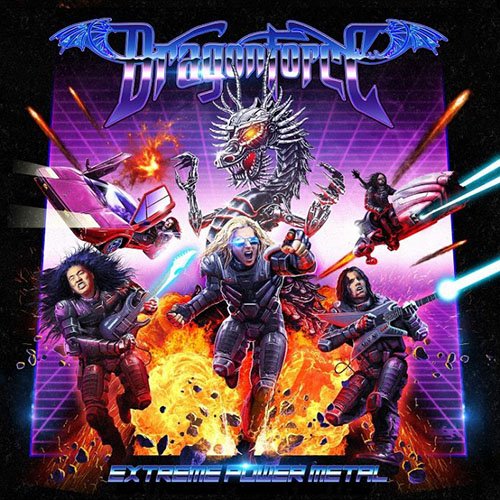 Twenty years after their formation and through a series of records, some good ones, some not so much and after some high prestigious tours, such as with IRON MAIDEN and their Guitar Hero involvement, they continue to show great mobility. A look at their eighth album, “Extreme Power Metal”, shows that DRAGONFORCE have not lost their energy at least.

The album cover is a vintage throwback with bright colors, sci-fi lasers and a dragon that looks like it came from an arcade version of a 1980s game. At the same time, this is the first album not including their long time keyboardist Vadim Pruzhanov and the last with bassist Frederic Leclerq before departing earlier in 2019 to join KREATOR.

The album opens with “Highway to Oblivion”, a very characteristic DRAGONFORCE song before moving on to some more experimental compositions. “Cosmic Power of the Infinite Shred Machine” is perhaps a piece so worthy of reference that it might be the one carrying the entire album on its back. Very interesting sections and rich passages with intricate tunes, coupled with wonderful and powerful emotions, something that at such moments of synthetic agitation, the British know how to do well.

If you have never been into DRAGONFORCE before, I don’t think their new release is going to get you started looking for them, but for the rest, new hymns like “Cosmic Power of the Infinite Shred Machine” and “Troopers of the Stars” will remind you why you dealt with them in the first place. As for “Extreme” in the album’s title, “In a Skyforged Dream” confirms the extreme Power Metal definition, with the band luring you into a ruthless headbanging.

All in all, aside from the above pieces and a truly nostalgic Artwork, unfortunately this new DRAGONFORCE effort, we wouldn’t say it is a particularly high quality addition to their work so far. We are expecting something better in the future, they have already proven that they can.

PS. The album also includes a cover of Celine Dion’s “My Heart Will Go On”, evaluate it as you might think.