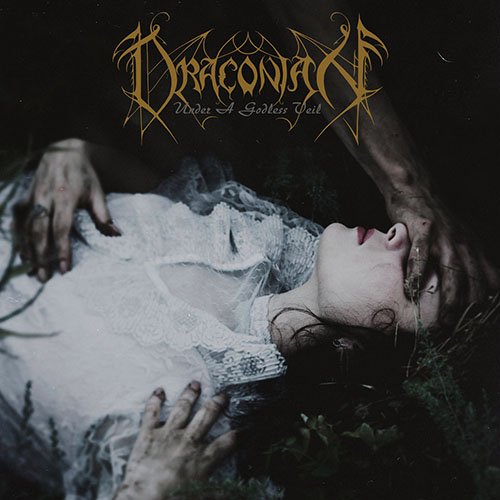 Writing a review and expressing your opinion on someone’s work and effort is never easy and many times it can be unpleasant. Especially when it comes to a band that you feel is yours, you feel loving it and it is part of you, things are even more difficult. So, when it came time to listen to the new album of my favorite DRACONIAN, on the one hand there was of course the anxiety, on the other hand the fact that I had to say something about it, something I might not like either.

Fortunately, before all this, preceded the single of “Under A Godless Veil”, the magnificent and awesome “Lustrous Heart”, easing the doubts. Not because it’s a song that will make you headbang, you do not want that of course from the Swedes, but because it mercilessly hits your inner world and obviously, here, this is what you want from them.

So we start with the cover. Gothic, almost scary. Death is probably present. But this is not what catches your eye. What draws your attention is the band’s logo. The way the word “DRACONIAN” is written. It’s not that of the previous records of the band but that of their first release, the “Where Lovers Mourn” of 2003. It is the logo with which we met them, the logo that they wore when, releasing their first album, many people, me amongst them, had said “this is THEATER OF TRAGEDY, as THEATER OF TRAGEDY should be”. So a little bit of the first single, a little bit of the logo, a little bit of “The Sacrificial Flame”, “Sorrow Of Sofia” and “Moon Over Sabaoth” that followed, sparked not only the impatience but also the hope that something really good is coming from the camp of the Swedish band.

And the confirmation came. “Under A Godless Veil” played in its entirety. Played again. And again. Until I was sure that it is not just excitement but reality what came out of the speakers. And it was. This is not a direct reference to the band’s debut. Not even something that rejects the band’s course so far. This is a shift to their most Doom Death sound, retaining however all the gothic elements of their recent present. A marriage corresponding to their big name in the genre. A wonderful result.

The whole album is very special and powerful. It speaks to the listener’s soul. It plunges everyone into a sadness that can be almost joyful. The game of the “evil” and the “innocent girl” holds well and until the exit, the wonderful “Ascend Into Darkness” keeps you with undiminished interest.

No DRACONIAN’s follower, older or younger, will be left unsatisfied. For sure, something more than interesting will be found here, making everyone to enjoy this new work of the Swedes! Enjoy responsibly! (Sleepwalkers… This. Listen and you will understand).