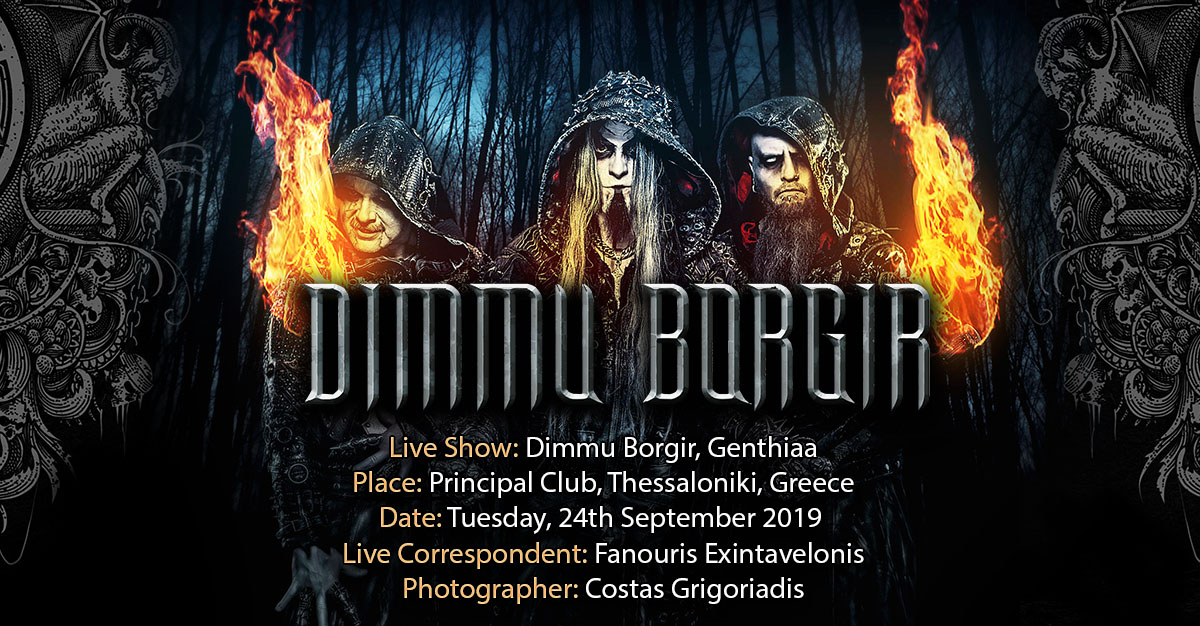 The sky of Thessaloniki was already heavy by noon, a foreshadowing of what was going to happen today in the city of Thessaloniki…..but even that sky could not warn us of the ensuing storm!!

We arrived at the concert around 8:30 p.m., hoping to attend the show of GENTHIAA, the Greek special guests of the evening. Unfortunately, that never happened! The organizers made a mistake in announcing the hours, the whole program started half an hour earlier, with a result of not being able to see GENTHIAA and furthermore, some of the late ones to lose even part of DIMMU BORGIR’s set.

Later on, at 9.30 p.m., the most widely acknowledged Symphonic Black Metal band of our time, was on stage! Principal club was crowded with metalheads ready to prove that 16 years since the last appearance of the Norwegian masters in our country, were too many! “The Unveiling” sounds and “Interdimensional Summit” gives an end to that long waiting.

DIMMU BORGIR, magnificent and imposing, on a very good night, with Shagrath doing whatever he wanted with the audience, who was actively involved in each of his callings.

The set is geared towards more recent releases, focusing on their latest album “Aeonian” with this more intense symphonic style DIMMU now have in their music! Nevertheless, songs like “The Chosen Legacy”, “The Serpentine Offering”, “Puritania” and “Progenies of the Great Apocalypse” took us back in lovely eras….

It was a 0magnificent night, proportional to the greatness of the Norwegians! The sound was crystal clear and the performance great, fact that rewarded the audience for those years of waiting! I hope not to take so long time to visit our country again!

On the other hand, there were some things that went wrong…. we have already mentioned the organizational thing, with the wrong timing of announcing the concert schedule and what it cost to people who missed the concert. So where is the organizers’ respect for the audience?

The second con of the night was the duration of DIMMU BORGIR’s set. It lasted 70 minutes like most concerts of this kind. However, I’m sure that the great Norwegians could certainly provide many more pieces from their discography. No matter what, the images that come from such an experience and with such performance and quality from the band’s appearance are enough to satisfy even the most demanding fan!