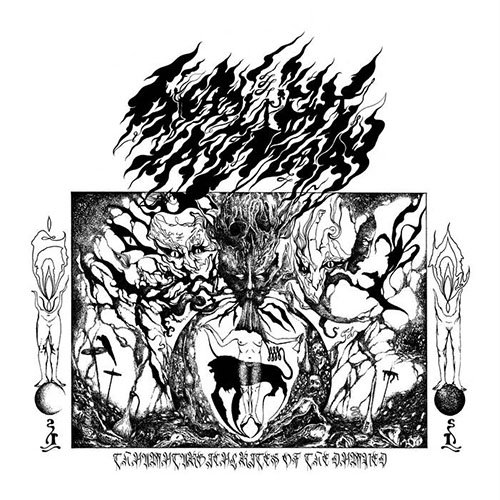 DEADLIGHT SANCTUARY is the one-man project of the Norwegian artist G., those involved in the underground scene are familiar with his works from the Death / War Metallers GOATKRAFT. G. obviously wanting to create a more perverted sound than the one of GOATKRAFT, and being influenced by such acts as BEHERIT, BLACK WITCHERY and BLASPHEMY, he formed DEADLIGHT SANCTUARY and now invites us to follow him in the nightmarish paths of his sick debut album “Thaumaturgical Rites of the Damned”.

In the poisonous twenty-five minutes of the album the listeners will be transcended to a rotten and dark dimension with the fear dominating them every single minute. An emotion that starts from the first moment you see the album’s cover, which prepares you ideally for its musical content, a Black / Doom Metal ritualistic mix that at some parts touches the limits of War Metal sound. Some will wonder why G. created DEADLIGHT SANCTUARY since he already plays in GOATKRAFT which musically may sound similar to some. The answer is that in “Thaumaturgical Rites of the Damned” he puts his attention to the more inner and contemplative paths of Black Metal, looking for the most decadent and perverted atmospheres as BEHERIT and early DEMONCY have done in the past.

The result of this inner search is that the Norwegian musician is taking us on a journey into an underworld that is dominated by perversions and the smell of death. DEADLIGHT SANCTUARY’s debut is an act of worship of the decay and condemnation of the soul that are ritually imposed through occult lyrics, eldritch vocals, and a perverted Black / Doom Metal aesthetic.