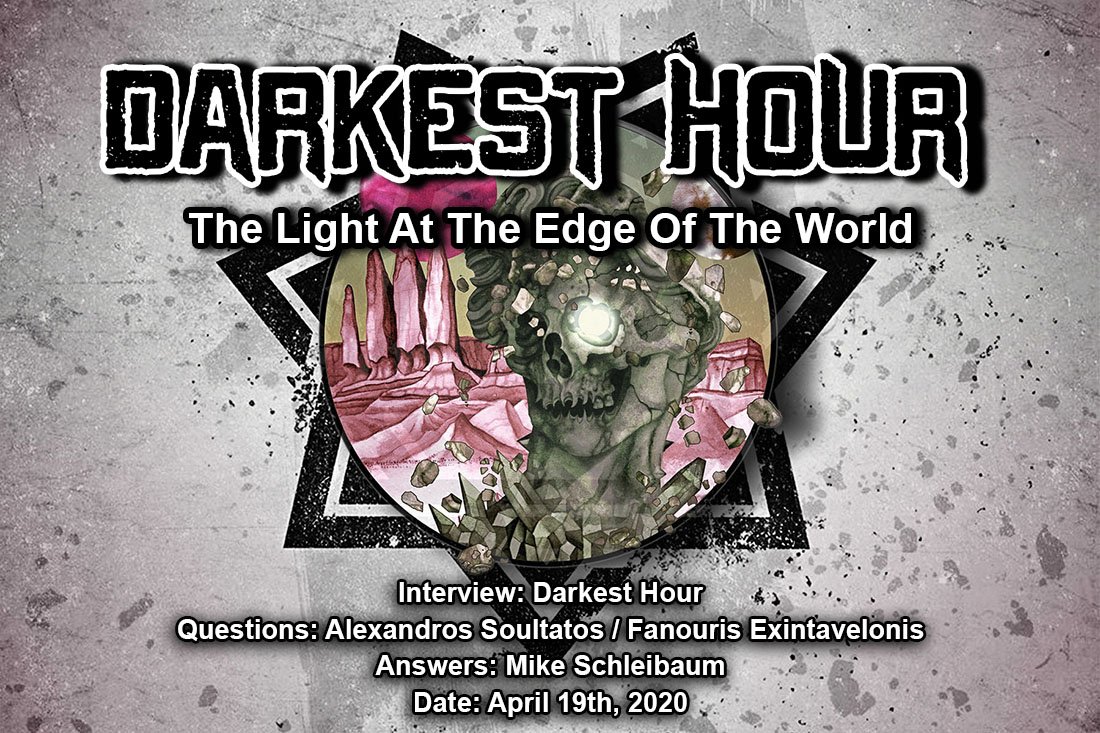 DARKEST HOUR. A reference band for the American sound, all the way since 1995. Having remarkable albums for the New Wave Of American Death Metal (NWOADM), they had their last official release back in 2017, with the album “Godless Prophets & The Migrant Flora”, in which they’ve presented us a slightly different music character to what we were used to. One of the founding members, the guitarist Mike Schleibaum, is here to answer our questions related to the past, present and future of the band.

Hello from Greece Mike! Let’s start with your latest release, 2017’s “Godless Prophets & the Migrant Flora”! It was quite different from your previous albums, more “aggressive” and “raw” someone would say, with less melodies of course! What was you fans’ response to it? 3 years have passed already. Would you change anything in that album?

Mike: Hi there! The critical and fan response to Godless… was great! We couldn’t have asked for a better response. Also it wasn’t our intention to take “all the melody” out but I think the melody is just presented in a different way on the record. It’s a bit more melancholy and somber and definitely less pop. It was definitely our intention to make a heavy more aggressive record and I think that brought us naturally back to our roots. With that in mind I think the only thing I would have changed if I could would be finishing some of the songs that were left on the table, but at least they create amazing finds for our fans in the future. We loved that record and era in time and are excited to work on the next one.

There seems to be quite a bit of confusion when it comes to characterize the music of DARKEST HOUR, so how do you feel about that? Is labeling important for you band? How would you describe your music?

Mike: I think labeling can be important when it comes to the overall presentation and marketing of the band, especially in the early years. But now I think the overall sound of the band is pretty obvious just based on the sheer volume of records we have put out. It’s just as easy to find a link to listen to as it is to find one that describes the band!

How is your music being received from the critics and the live audiences who are not familiar with your band? The first reactions of someone irrelevant who listens to your sound???

Mike: Back in the day people used to think that our vocal approach was crazy, now the whole world of metal music has come around to more of our style of sound. That used to be so funny, but now music has evolved in our direction. At the same time live music has evolved and us along with it. In the early years when you saw darkest hour I think the first reaction was “Holy Shit What the Fuck is happening!” but now I think its a lot easier for people who have never heard the band to digest our live shows. We have refined the sound without losing any of the live intensity and that makes it just easier for people to understand what’s going on etc.

You exist as a band since 1995, counting already 9 full-length albums and many tours! What is the best moment in your career till now? The one that you will always remember??!!

I was fortunate to see you live in Athens (back in 2011), at the last night of your world tour for “The Human Romance”! A great show with all the people coming on the stage at the last songs! I also had the luck to see you live again at my homeland, in 2017 together with PARKWAY DRIVE! Do you have any memories from your shows in my country? General impressions from Greece and from the Greek audience?

Mike: Oh we LOVE GREEK AUDIENCES! They have so much passion, deep love for the music, and love for all things PARTY! We love their warm openness as well as the energy that only a Greek Audience can deliver! We look back on ALL of our shows in Greece as great success and REALLY look forward to coming back some day!

How about working with some of the most notable names in the Swedish scene, such as Tomas Lindberg and Peter Wichers among others? How did this cooperation come up? Did that help you improve yourselves?

Mike: We have been lucky enough to tour, perform, record, and meet so many of our legendary icons! One of the BEST things about having a moderately successful band is the access it brings you. We have met countless members of the Swedish Metal elite and have been lucky enough to call some of them friends. Naturally a musical collaboration follows and we are happy to tell you all that every guest appearance or credit to a Swedish metal icon is out of pure love and super fan-dom! Of course being around such legends can help you grow. I think more then anyone the biggest influence to us as a whole was Devin Townsend. He brought so much to those records and inspired us with ideas we are still struggling to comprehend today!

Is there any meaning behind the name DARKEST HOUR, or was it just sounding cool at the time?

Mike: Honestly, we had a ton of shows booked and we needed to pick a name. Our drummer had a list of like 20 names (most of which were kind of brutal) we picked Darkest Hour thinking we could just change it later if we hated…25 years later, nope it stuck! I think we were lucky picking a band name in 2020 is so hard…this was way before you could even know if there was ANOTHER darkest hour haha!

When you started the band, did you have any idea of how far you would go? What was the most difficult moment during your career? The one you said “I’m gonna quit!”….

Mike: We have had all sorts of panic moments…being in a band this long has its up‘s and down’s trust me if there is anything this pandemic has taught us its that you have to keep your chin up! But if you have to have a list here are times when we questioned it all haha:
The first time we were arrested as a band, the first time we had over 10,000.00 stolen from us, the time we got stranded in Europe thanks to wow air, the time we flew all the way to Australia to find out our tour was canceled and we lost tons of money, or most recently that time when all shows were canceled for a year and someone invented social distancing…lol…being in a band can be brutal but we always fight on!

What are DARKEST HOUR’s plans for the near future? Any new material being recorded? When are you planning to release your new album? Any information from it that could be shared…

Mike: Well, we are working on new material while we wait out the fate of live music. We have a tour of the USA that starts in December and that may be the first time we play in America this year!
Other than that, all of our attention is put into our Patreon right now as it is the ONLY way we are surviving this crazy time. We encourage everyone to check it out, it’s a monthly subscription service that is all Darkest Hour based, you get a ton of free DH stuff and content so if you are a fan of what we are doing and need more this is the place to go! Check it out at: https://www.patreon.com/DarkestHourOfficial

Lyrical themes of DARKEST HOUR. “Love” and “ecology” between others. What are the main concerns of the band? Who is mostly responsible for your lyrical subjects?

Mike: The lyrical ideas are usually always John our singers, but the concepts can come from other members and there is usually a shared understanding amongst band members that we stand behind or at least agree in general to what John is writing about or saying etc. – its funny how a band who is categorized as extreme etc has more of a kind message then most politicians or religious leaders now a days. This is what we have always been about, the music is dark, crazy, and extreme but the message is one of hope and optimism in some ways.

Your last words to the Greek and the Metal maniacs globally…..

Mike: They would be THANK YOU! Thank you for all the years of support, for those many amazing shows we have had, for all the long after parties, to all our friends in Greek bands who took us around town and showed us GREECE, Thank you for all the drunken conversations and late night street walking! Oh and also thank you for the amazing food, tasty Ouzo, Beer, We love you and all things Greek – cant wait to see you, until the next mosh pit, cheers from DC! <3 Darkest Hour

Paradise Lost – In the Court Of The Shadowkings