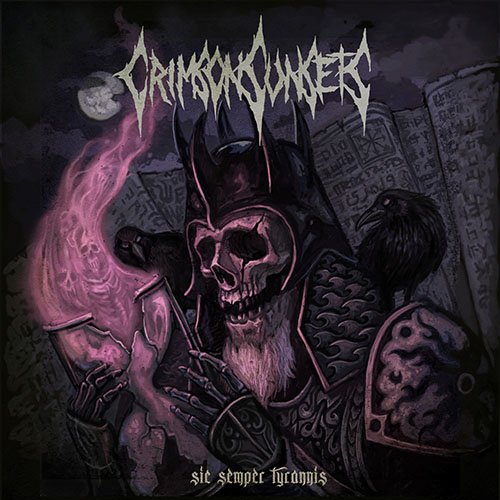 “Sic Semper Tyrannis” may be the debut album of CRIMSON SUNSETS, but this particular band from Athens is not a newcomer since it was first formed in 1994. In fact, it released two demos in 1997 and 1999 respectively, before dissolving in 2002 and recovering 15 years later, in 2017, in order to record a full-length that would sound (according to the band itself) close to the doom/death metal style of its early days.

Listening to the album, I have to admit that CRIMSON SUNSETS totally achieved their goal. Indeed, this is doom/death based on the teachings of the ’90s, as they were given to us mainly by the English school of the specific genre, combined with some influences by names such as TIAMAT, AMORPHIS, THE GATHERING, and even EDGE OF SANITY. I find the band’s style to be closer to the blending of metal roughness and dark temper that PARADISE LOST displayed in the “Shades of God” album, and not so much to the “mournful romance” or the darkwave/gothic rock influences that other bands of the scene usually present. The songs roll, on average, at mid-tempo pace, the band members’ performance is high (after all, these guys are experienced musicians), while the quality of songwriting (I singled out “Vae Victis”, “Ravens”, “Halls of Extintion”, and “Inglorious Fate” that concludes the album in an imposing way) as well as the interesting orchestrations with the discreet keyboards in places, guarantee that “Sic Semper Tyrannis” flows effortlessly during its entire 43 minutes. Finally, it’s worth mentioning that a very good job has been done as far as the sound of the album is concerned, with the production/mixing taking place at Feedback Sound Studios, while Steve Lado at SL Studios is responsible for the mastering.

In conclusion, if you are a doom/death fan and somehow you’ve got tired of all these bands that go with the well-known recipe involving the brutal-male-vs.-female-clear vocals, the acoustic verse and the heavy chorus, the pseudo-melancholy, the soft-porn aesthetics and so on, then “Sic Semper Tyrannis” is one of the best-case scenarios of releases in the specific genre, that you will encounter this year. I just hope that the album will be soon released in physical format.