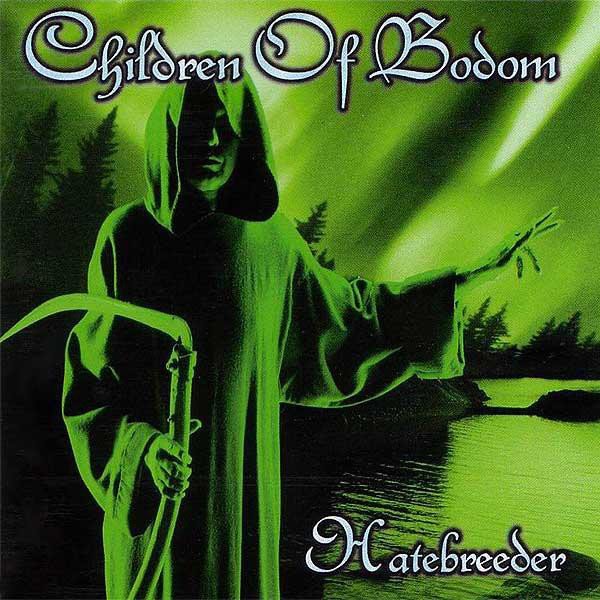 The “Bodom’s children” are back with their second album named «Hatebreeder». In this album, through its cover, death welcomes us once again (he was in the debut album too), this time with different colors just to cheer us up … green colours with a lake on the backround (is it really the lake Bodom just outside of Helsinki, where in June 1960 three young campers were stabbed to death?)

From their first release, we were used to very loud and fast music by the Finns and in case we wanted to put a label on it, this would be “melodic Black Metal with Power Metal parts” or “fast Power Metal with Black Metal vocals”. Of course, they still play this kind of music in their new album, with only difference the better and deeper compositions and of course, a louder and cleaner production. Speaking for compositions now, in «Hatebreeder» we are witnesses of great music and composition skills. With songs like  «Silent Night, Bodom Night», «Bed of Razors», «Towards Dead End», «Warheart», «Children of Bodom» and, of course, my favorite  «Downfall» (with the amazing intro!), which are diamonds in the modern extreme-melodic sound, we couldn’t do otherwise.

While you listen carefully to «Hatebreeder» you can easily see that CHILDREN OF BODOM have many influences. Starting from IRON MAIDEN, STRATOVARIUS to IN FLAMES, DARK TRANQUILITY AND DIMMU BORGIR. There are also parts that the Finns show us their classical education, referring to compositions of Wolfgang Amadeus Mozart! That explains the multidimensional music they give us. Of course, all the ideas are coming from the endless source of inspiration, Alexi Laiho (vocalist-guitarist) who, in cooperation with the keyboardist Janne Warman Pimeys, gives a well-trained musical feast. Purposely or not, CHILDREN OF BODOM show us an alternative way to how melodic Black Metal should be played in our days….

It is commonly known that Alexi Laiho had tried to commit suicide many times in the past. With this album in my hand, the only thing I have to say is: WE ARE FORTUNATE HE NEVER MADE IT!

Rejection – A New Age Of Insanity

Overkill – The Wings Of War