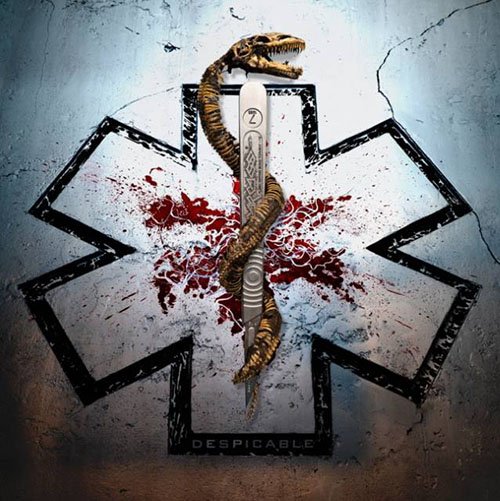 After seven years of tortureus patience and deprivation, waiting for a new album from Death Metal legends CARCASS, COVID-19 affected negative the band’s plans for this new release. The deteriorating situation in the world with this epidemic, forced the group to announce the postponement of their upcoming album. But the British decided to make all the fans happy by announcing the release of a new EP entitled “Despicable”. This new CARCASS’ release includes four new songs of which only one will be included in their upcoming full length “Torn Arteries”.

Beginning with “The Living Dead At The Manchester Morgue” in which the guitars hypnotize you in the beginning with the initial harmonic rhythm, to evolve the composition then into a majestic combination of “Heartwork” and “Necroticism” with alternations in rhythm, blast beats and an awesome groovy breakdown. Going on with “The Long and Winding Bier Road” on a slower and melodic musical path, with the crystal production highlighting the amazing work that the British have done on guitars. A song that could easily be included in “Swansong” album.

Next is the “Under the Scalp Blade” track, a song that will be included in the upcoming album, which I hope to be indicative of the other compositions. An adventurous track in which the main riff (with its Doom Metal influences) is the main musical guide, without however missing the band’s blast moments with the characteristics Death/Grind outbursts. “Slaughtered In Soho” which closes the EP in a triumphant way is another solid mid-tempo melodic tune, in which the rhythm is leading to a subjective affective guitar break and shouts along choruses.

“Despicable” is a remarkable appetizer until the release of the new album. CARCASS add another great release to their already impressive discography, worthy of their music legacy. They may sound a little bit more melodic than we are used to, but at the same time there are all the characteristic brutal and heavy elements of their sound that we love. Another pleasing surprise of the new songs is Bill Steer’s bigger involvement at the vocal part, which I hope will continue and on the new record. Taking in consideration that the ¾ of these musical ideas were left out of CARCASS’ new album, our expectations for “Torn Arteries” is at the highest levels!!

StartTheMonkey – The Start Of The Monkey