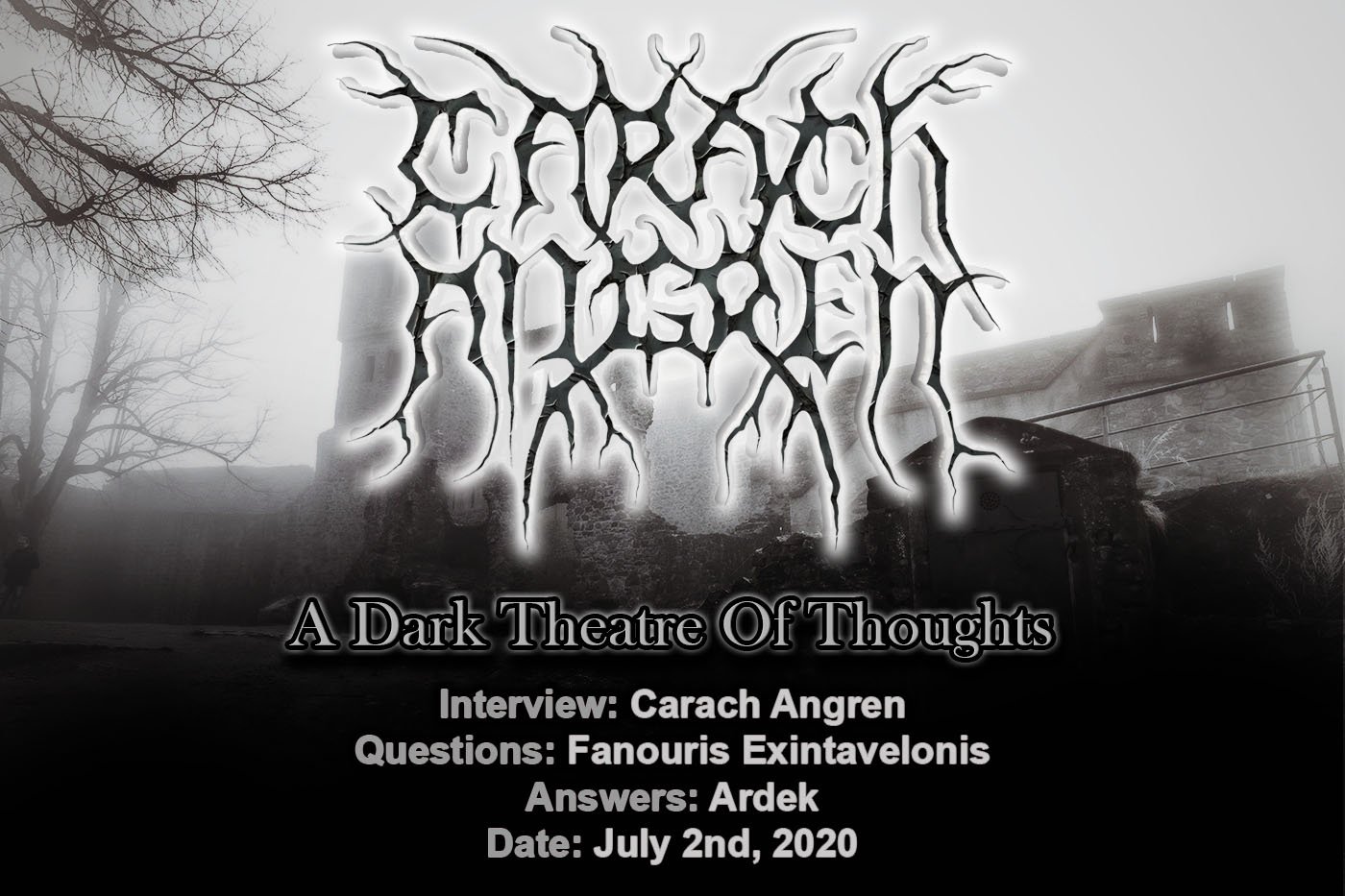 CARACH ANGREN is a special case of a band. This is a band with Black, Gothic, Dark and various other elements in it’s music. Apart from this very beautiful mixture, the thing that makes CARACH ANGREN stand out even more, is the theatricality. This is not only seen in their recordings but also in their live performances, which are a really worthy experience. On the occasion of the release of their new album “Franckensteina Strataemontanus”, we have talked with Ardek. Let’s see what he told us….

– When CARACH ANGREN started what were your main influences at the time and what lead you to form the band? Also, your name! CARACH ANGREN is a name from within Tolkien’s books, why did you pick that one?

Ardek: We formed the band back in 2003, initially as a project but it grew very fast as we released our first CD Demo called “The Chase Vault Tragedy”. For this release we immediately had the idea to tell ghost stories because it really inspired us and it seemed cool to have one central story on a release. The advantages of a story or concept is that it binds everything together both musically and graphically. So what lead us to form the band was the shared interest and passion for horror, black metal and metal in general. We felt pulled to everything dark and just couldn’t help but create music and art. The name is originally from Tolkien indeed but that’s as far as the connection goes conceptually. Seregor had this name written down for some time already and when it was time to pick a name for the band he suggested this one among some others. We felt this was the right one as it sounds really evil and a bit mysterious.

– CARACH ANGREN consider to be part of what we call Extreme Metal, how would you describe extreme music? Everybody has a different definition of extreme music and I just like to get your take on extreme music.

Ardek: I think that what I like about metal and extreme music in general is that it has much less “boundaries” compared to other genres. You can almost do whatever you want within extreme music. We for example combine classical elements and influences from soundtracks into our music. Also, you have a wide pallet of contrasts because, like the “extreme” tag suggests, you can go really far sonically into brutally distorted fast and heavy parts and contrast it with the opposite. Some bands are extreme all the time, classic death metal bands for example. We are more about contrasts. If you listen to our intro’s they sometimes paint a magical, fairytailish picture but this sets the perfect scene for darkness to come in and therefor it increases its impact.

– I was present at your last year’s Concert in Thessaloniki – Greece, theatricality, horror, great performances. All the above are parts of CARACH ANGREN’s music, but, why is this happening? What do you want to pass to the audience?

Ardek: We are about the full experience. We tell stories and really feel this when playing live, that’s what you see. A lot of it is not planned ore rehearsed but has grown into our performance throughout the years by repetition. We see our band as a sonic movie, something you can really deeply go into. Forget about your own life for a moment. It’s like going to the cinema. We hope to achieve that through our albums as well, the fact that we keep releasing concept albums hopefully “forces” people to really sit down and enjoy the albums entirely instead of skipping songs. Technology these days makes it easy to just skip between songs and albums all the time. Don’t get me wrong, it is a great thins but the downside is that there is a risk of not taking the time to get to the full experience.

– Your new album, “Franckensteina Strataemontanus”, a great storytelling album, a concept album! Can you tell something about it? Where do you get the idea for lyrics from? Did it helped to the evolution of CARACH ANGREN?

Ardek: Yes, it definitely felt like a whole new level of art in our career. It’s a concept album about Johan Conrad Dippel, an alchemist that inspired Mary Shelley to write the novel Franckenstein. The man is a mystery and at the same time a notorious figure. We felt we could tackle many angles to this story, we included fiction as well as facts. The album starts with the listener learning about a young boy that played in woods near German town Darmstadt. He got ill, died and came back from the grave to eat his parents. In the next few songs we get introduced to the madman Dippel, working in his laboratory. Trying to create a monster, in order to work on his masterpiece, the elixir of life. The song “Sewn for Solitude” is a song telling the story from the perspective of a being that is created in a laboratory and now has to hide from mankind. A very sad tone. Then we take a leap forward in time to World War II. Operation Compass tells the story about the British force fighting the Italian forces in Northern Africa. The british soldiers were instructed to use Dippel’s oil (bone oil) to render water wells undrinkable in case of a retreat. So here, something that Dippel created was used as chemical warfare. In the song the demonic forces connected to Dippel come through the oil and resurrect the fallen soldiers into a manic zombie extravaganza. The following songs slowly work towards the end where Dippel finally achieves his goal and creates plus drinks the elixir of life. However, his flesh still rots away but his spirit is doomed to roam the earth and can’t leave the spot where he drank the elixir. This is how the end is connected to the beginning of the album again. It was Dippel’s spirit that infested the young boy and that’s why he got sick and resurrected from the grave.

– With the current global situation, touring is difficult, but what your future plans on supporting “Franckensteina Strataemontanus”?

Ardek: We are currently in the process of making a really twisted video, so that is the main focus for us right now. There are some other cool plans in the works and we are confident that despite the touring situation the album has gotten a lot of attention already and will get even more in the near future.

– What inspires you to make CARACH ANGREN’s music? What is your main influence if any?

Ardek: The main influence is our connection to horror and stories plus the need to express ourselves through art. As a composer I’m always looking to get to that new amazing melody or musical part that will capture your imagination. I think this will never end and for me it is like the highest form of expression in this reality. So this drive is also our main influence but in our quest and on our journey we come accross films, books and other music that inspires us. Like for this album the orginal Frankenstein novel was a great inspiration to me. It can be anything in that sense. Looking back though I always feel some kind of strange sense of understanding. Looking back I can always connect the dots of what lead me to this point. Looking forward I can never tell but that’s also the cool thing about it.

– Why did you decide to write about Horror instead of the usual topics approached in Black Metal?

Ardek: For me a lot of those typical black metal topics have been handled greatly by a lot of other bands. I personally didn’t feel any need to go in and contribute to that. It felt like -done- and maybe even over-done. Also, times change constantly and I think for example that even mainstream religions have developed since the 80s, 90s. There is more freedom of speech and freedom to chose your own path although that created a whole new set of problems, nihilism and feelings of disconnectedness among people. Anyway, we did not want to have a band connected to any of that. We wanted the band to be entertaining, storytelling. To take you out of all that every-day “stuff”. It’s also much more “fun” to work on it that way. It’s not heavy and as “Serious” as one might expect listening to it. It’s like creating a movie. How does paranormal effect you? You believe there is something on the other side?

– How does paranormal effect you? You believe there is something on the other side?

Ardek: I have always found it fascinating. The believe in the paranormal can be seen as a variable effect depending on cultures connected to a certain time frame. It is interesting. For example, thunder was first seen as a paranormal phenomenon, even godly. Now we see it as scientific and couldn’t care less. If you think about this example, I sometimes feel that with that transition something got lost. If on a summer day I look outside the window and witness thunder, I can feel alive, energised and amazed. It’s something to appreciate. The scientific explanation does not explain that experience and I like to keep it that way. We live in an interesting time. We have gone from religious dogma into materialism (we see stuff, made of particles, so that’s all there is) and more recently into quantum physics. What is fascinating about that is that quantum physics basically proves us that matter in itself does not exist. When no one is looking at matter it changes into an unknowable “form”. Here language doesn’t even function anymore to explain things. Yet, we are clinging in an almost religious way to the science of the 20th century. This development makes paranormal phenomena seem much more “normal”. So technically speaking, there is another side, because science has already proven that. How and what, we can’t seem to understand and if we would understand it, it wouldn’t be the other side. Enough philosophical talk haha.

– Your music is very theatrical. Outside the Metal spectrum, are there any other musical artists you’d like to work with, or a show or movie you would like to write the music for?

Ardek: We had our music featured in a great Canadian horror movie called “Pyewacket” and hope that things like this will happen more in the future. I myself am also composing music for short films and a variety of other projects so I’m always on the outlook for new collaborations.

– Do you have anything else coming up for the band? Anything else going on? What are CARACH ANGREN’s plans for the future?

Ardek: Like I said, we are now focussing on making a new video and hopefully we can get back to touring very soon next year!

– Finally, some words, some advice, anything you would like to share with our readers here in Greece or anywhere they are?

Ardek: Thanks a lot for the interview. We love our Greek fans and can’t wait to be back!

Night In Gales – Beyond The Crimson Eclipse