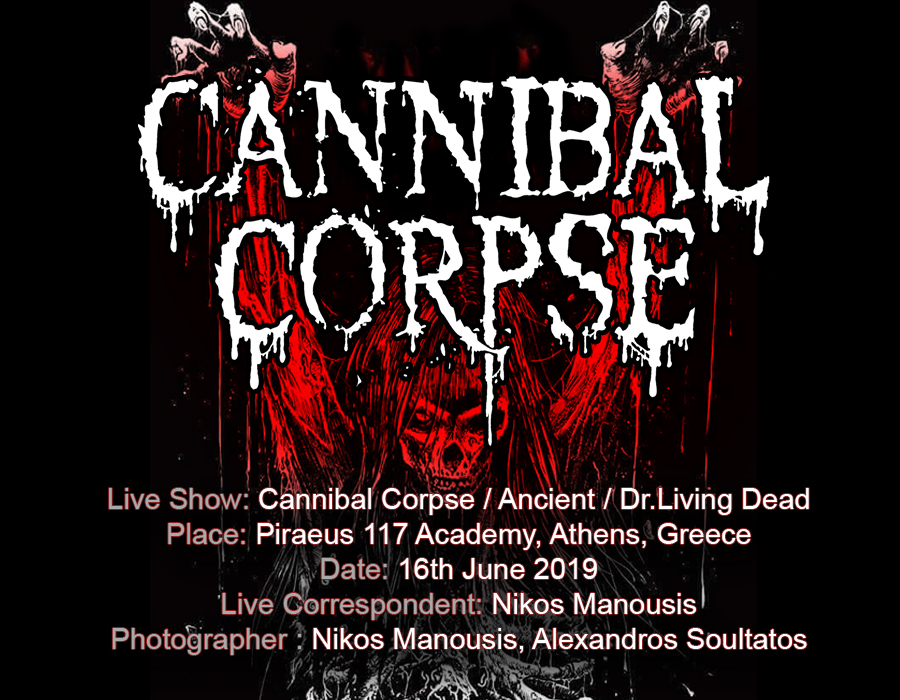 Sunday 16th of June and while Athens has been emptied due to three days and those who have not left are on the beaches, we are at Piraeus Academy to enjoy an extreme metal concert. The lineup consists of DR LIVING DEAD, ANCIENT, CANNIBAL CORPSE. 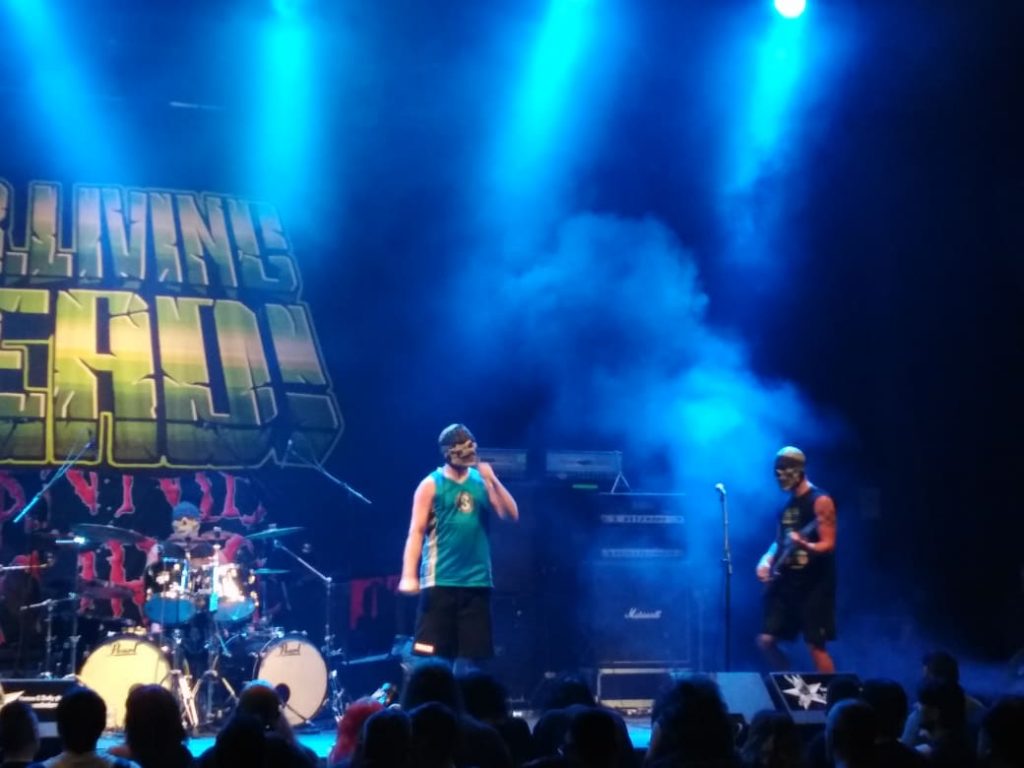 The ANCIENT were added a few days ago to the position of  MARDUK, who were cancelled for the reasons we all know, something which unfortunately affected the number of the people who came to concert.

According to the program, and without any delay at the exact time 7:15 the masked DR LIVING DEAD hit the stage with the song “Coffin Crusher”. The people at that time should not have been more than 200.

DR LIVING DEAD is a Crossover Thrash Metal band from Sweden, that has influenced for their stage presence and their sound from bands such as SLAYER, NUCLEAR ASSAULT, EVIL DEAD, S.O.D.,  SUICIDAL TENDENCIES. 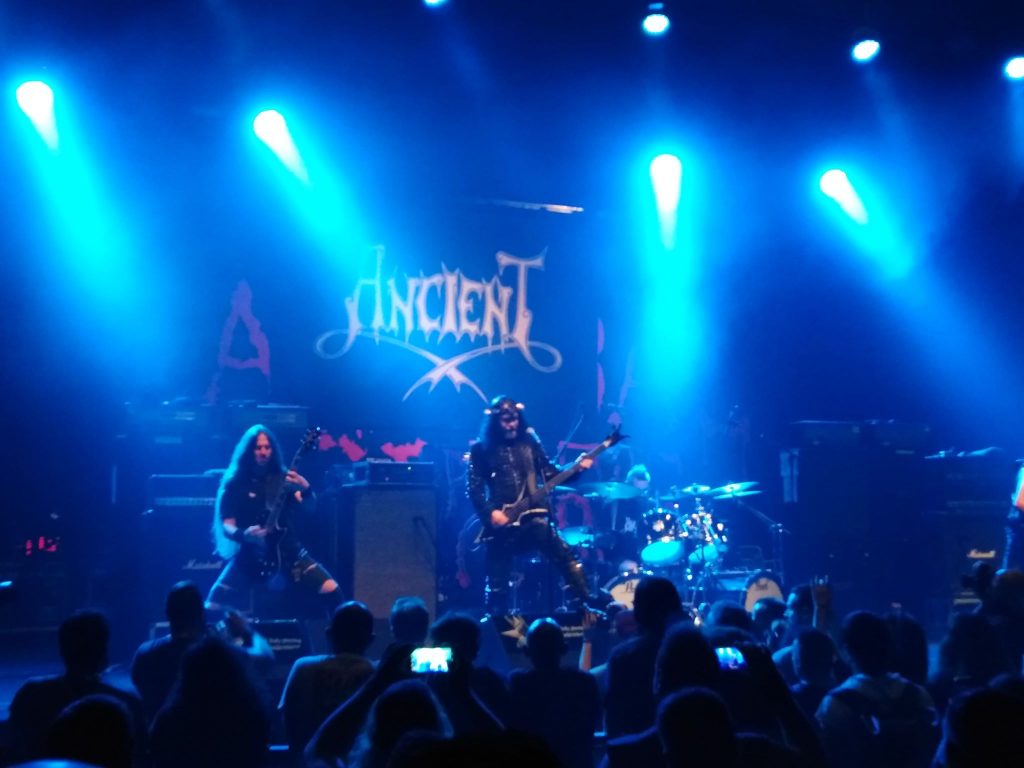 The band showed that they love what they are doing and that went through the crowd, fun, headbanging and cool thrash riffs for about an hour of their appearance. Very good stage presence since the band was playing with the crowd and was hyperactive on stage, the played songs from their entire discography. They closed their set with “Dr Living Dead” in which their guitarist descended and played among the metalheads creating around him a small circle pit. Great perfomance, it’s a great band and if you don’t know them, you have to check them out.

At 835, ten minutes earlier than the program said, ANCIENT appeared on stage and they had the difficult task, to replace MARDUK.. The band had announced some days before, that they would play a setlist of the 90s, something like that happened half as they played songs also from their latest releases like “Land Of The Dead” of  2016, “Proxima Centauri” of  2001 and “Night Visit” of  2004 also they came without Nick Barker at drums and deservedly replaced him a session musician. 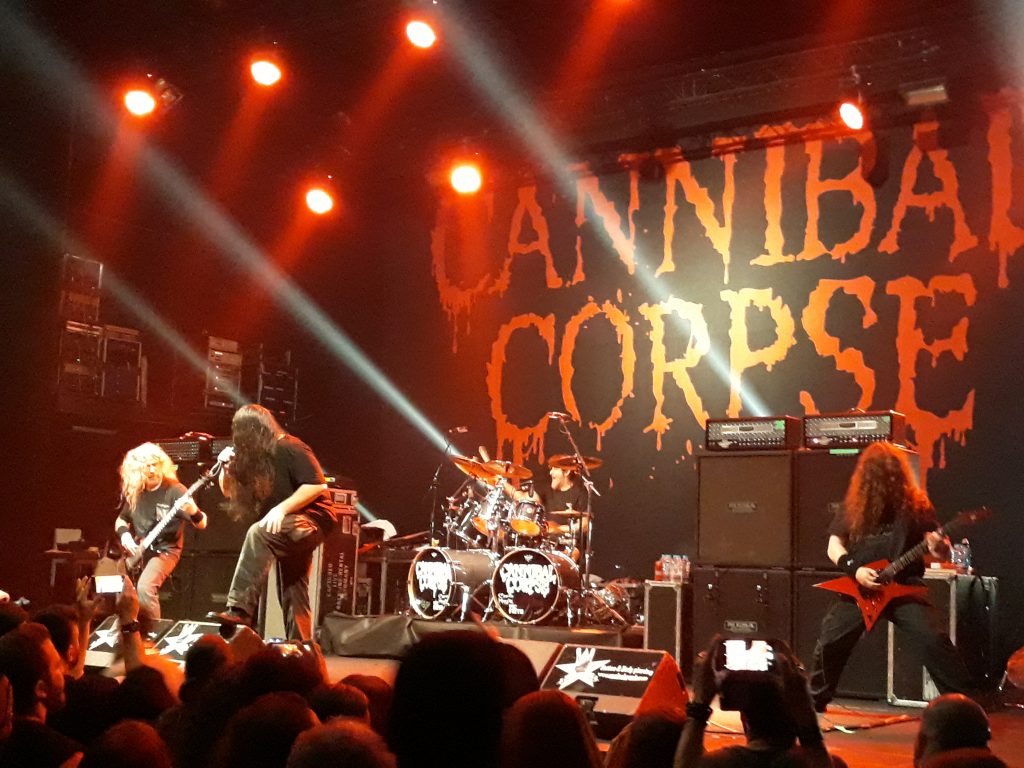 They begun to play one song after another. The sound at the first songs was not good on guitars, and we could barely hear the vocals of Aphazel. The first 40 minutes of their appearance, in which they played recent material, was hopelessly boring and this was also affected the reactions of the crowd. Somewhere there, the ANCIENT decided to wake us up and travel us in the mid-90 playing songs like “Trumps of an Archangel”, “Det glemte riket”, “Eerily Howling Winds” from their amazing debut “Svartalheim ” and “Trolltaar ” from their namesake ep. They closed with “13 Candles” a cover song  from the huge BATHORY and with a fire breathing from Aphazel they said good night to us. Good perfomance for ANCIENT that lasted about 75 minutes. 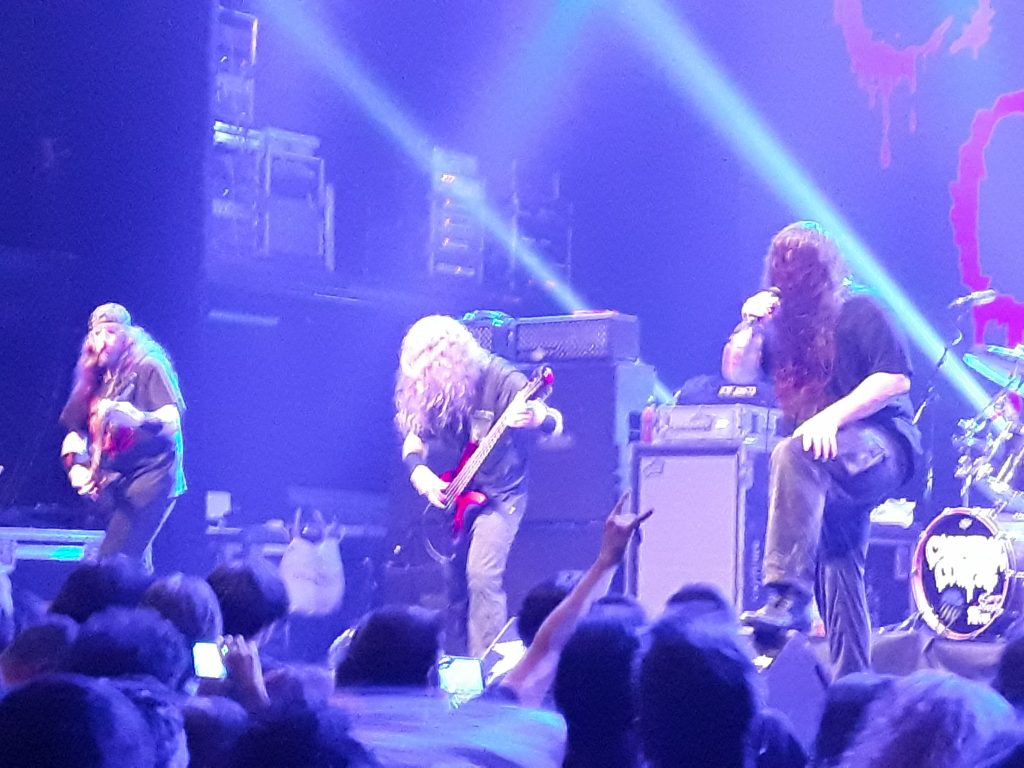 The time has gone 22:30 and on stage appear the headliners of the evening CANNIBAL CORPSE with the “Code Of Slashers”, the sound is awesome and the slaughter begins, “Only One Will Die” and “Red Before Black” are the next songs and underneath becomes hell, mosh pit, crowdsurfing and the crowd goes mad.

Next song is “Scourge Of Iron” which at its pace lured us all into ruthless headganging. George “Corpsegrinder” Fisher was dominating like a beast on stage imposing with his brutal voice and characteristic headbanging in tornado style, also the rhythm section with Alex Webster and Paul Mazurkiewicz was crushed bones. Impressive and the appearance of Eric Rutan who in solos gave his personal stigma and with his performance gave you the impression that he played for years with them. 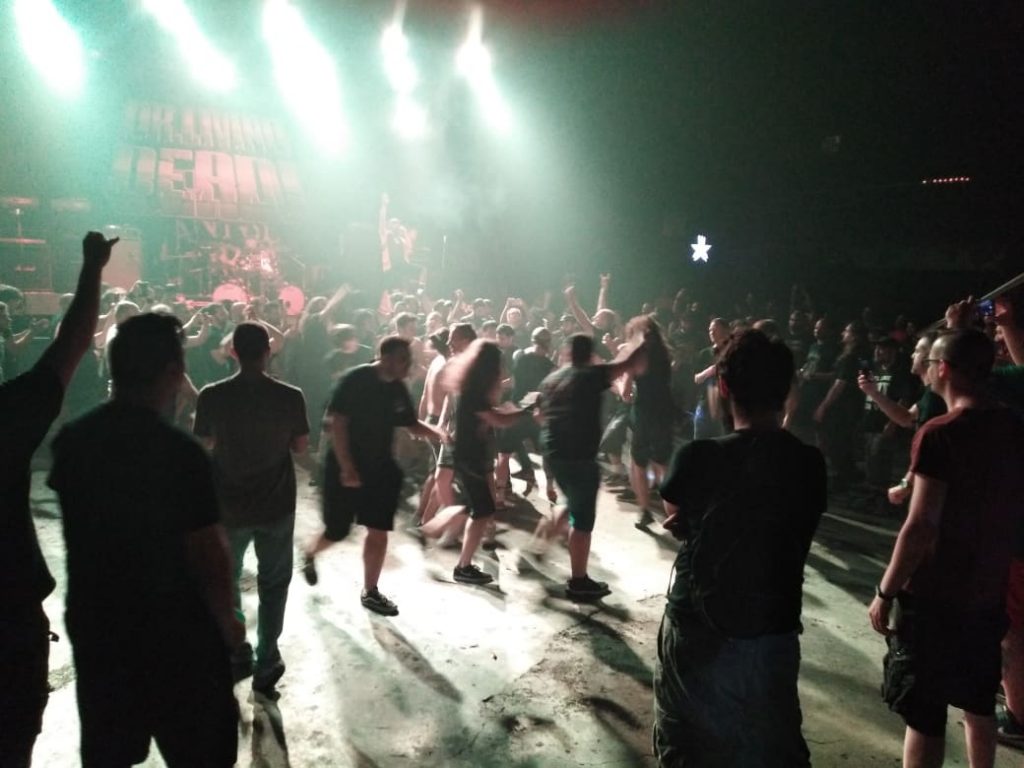 It was the 4 time I saw CANNIBAL CORPSE and I can say that it was their best, they destroyed everything and not unfairly considered the best Death Metal band at the moment. 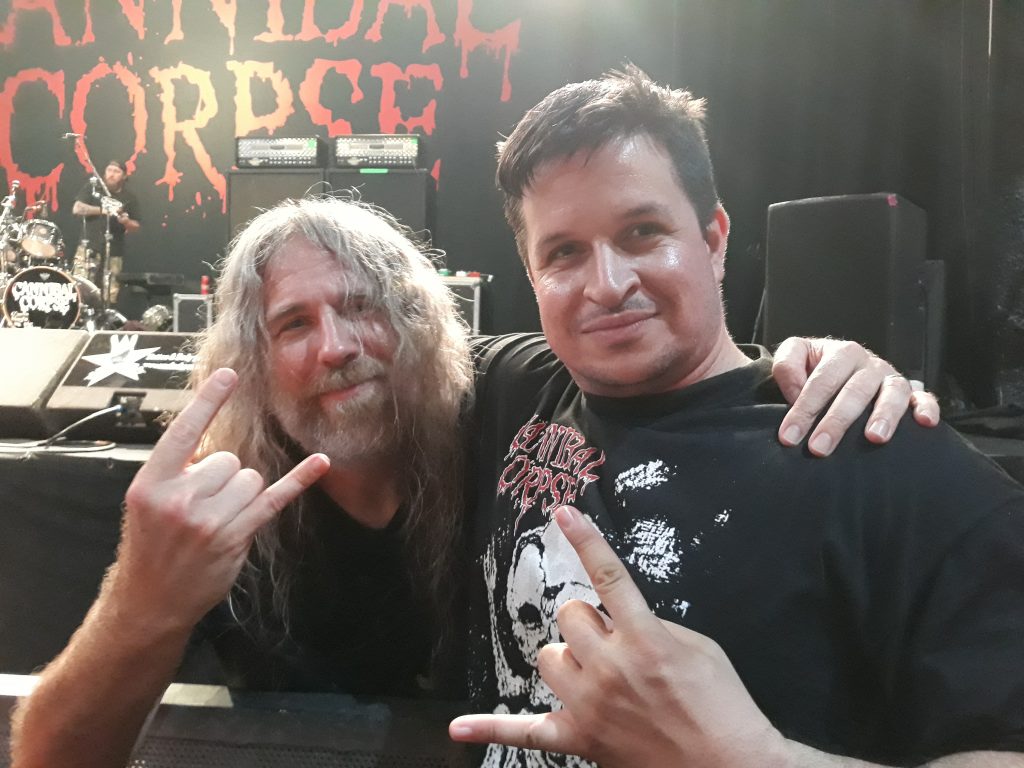 In total a value for money extreme metal event after combining bands of Thrash, Death and Black Metal, the organisation of the event was perfect and the program was followed without delay. The only negative thing, was the crowd size that did not surpass the 500-600 people and perhaps if in position of  MARDUK, the organizers should had brought a band of their class, and not ANCIENT. Also a great respect to Alex Webster who, when the cannibals finished their set went down to the crowd to photographed with everyone and signed autographs, without rushing to leave always with a smile on his face.