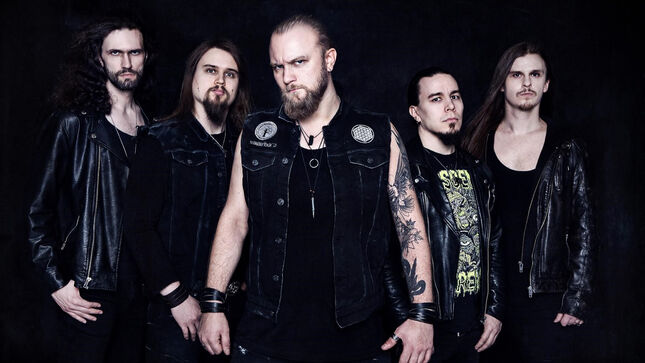 Finnish Melodic Death Metallers BRYMIR, have revealed an official lyric video for “Forged In War”. The track is taken from the band’s latest album “Voices In The Sky”, which was released on August 26th through Napalm Records.

With thousands of views on their videos and more than hundred thousand streams on their latest tracks, the band has established their befitting position on top, culminating with their European tour with FINNTROLL and SKALMÖLD kicking off in Stockholm on November 3rd.

Vocalist Viktor Gullichsen, comments: “Ever since forming the band in 2006, we’ve endlessly talked and dreamed about getting a chance to tour Europe. Also, we’ve been big fans of FINNTROLL since forever and you can just imagine the excitement and gratitude we feel for this opportunity to join them and SKALMÖLD on this wild crusade across the European continent. We could not have hoped for a better tour at a better time to promote our new album ‘Voices In The Sky’ and finally show what we’ve got to both old fans and completely new audiences. We hope many of you will come to witness the fitness of our Melodic Death Metal heaviness – as it is live that we thrive! See you all soon.”

The lyric video for “Forged in War” continues the driving sound of the album with incredible vocals and astounding riffs that can only be surpassed by their electrifying live performances. Striking once again with full force, this hymnic piece leaves no stone unturned and matches the heavy and electrifying tone of the album perfectly.

The band states: ”We wanted to see how far we could push the contrast between Death & Thrash Metal mayhem and a Power Metal chorus – and the result was ‘Forged In War’. When we wrote this song, it felt like we unlocked a new dimension of guitar chugging heaviness that will surely influence our songs far into the future. The track has already sealed its place in our new, crushing live set, so get ready to bang your heads off at your next BRYMIR show!”

Walking the line between Melodic Death Metal and traditional genres like folk and classical music BRYMIR continuously pioneer the limits of the genre, dashing ahead with their notorious sound. Mixing endless riffs, with catchy choruses, blistering solos and a flawless production, the unit creates skillful soundscapes of pure epicness.

You can watch the offiical lyric video for “Forged In War” below:

DEATHCRAEFT will release their new album “On Human Devolution” on 16/07/2021 worldwide!