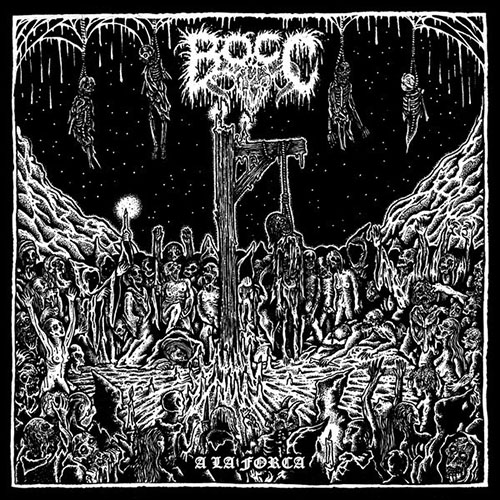 BOCC is a quite new band from Barcelona, as it was formed in 2019. At the same year, their first demo “Demo I” was released. Next year, 2020 finds them releasing their first EP “A La Forca”, with which they take us on a journey through the dark paths of the abyss.

The four arrangements of “A La Forca”, can be characterized as “rotten” Death/Doom music feast with its roots being found in AUTOPSY, COFFINS and WINTER, while its instant brutality brings BLACK CURSE to my mind. Raw with a strong smell of death, BOCC crush everything with its heavy riffs and growl vocals while the production gives a primitive atmosphere to the songs, which are emerging from the mud. The lyrics are all in Spanish and speak about death, magic, occultism with intense folklore elements and historical events of Catalonia, while the cover prepares you for the sick blackness that comes in the next 23 minutes of the ep.

Catalonia’s BOCC generously give us a ticket to hell and hades with their old-school Death/Doom Metal, which will be greatly appreciated by all fans of extreme sound. Production, artwork and arrangements compose an ensemble that shouts that this band will concern us in the future. All the fans of extreme sound shouldn’t wait until then but follow them now and feel the primitive power that a band of the underground brings out!