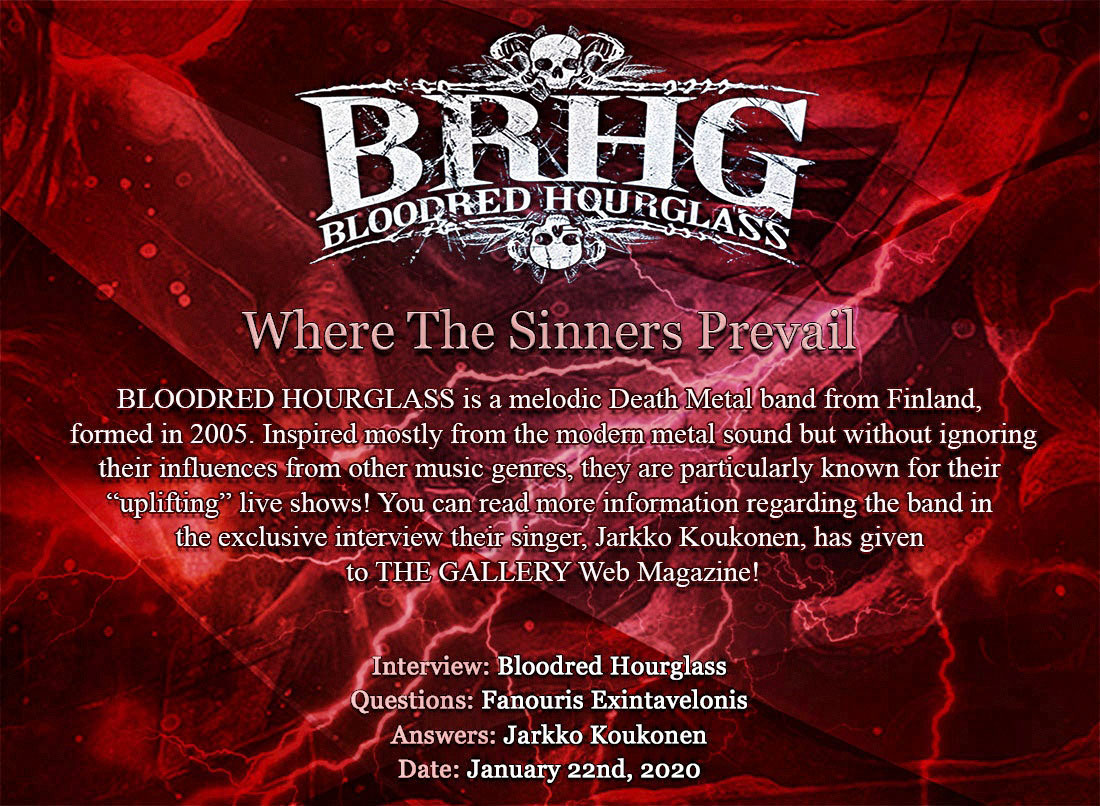 First of all, thank you very much for the opportunity of sharing some thoughts with us Jarkko! I am sure some of our readers aren’t familiar with the history of BLOODRED HOURGLASS, so could you give them some information about who you are? What’s the story behind BLOODRED HOURGLASS?

Jarkko: Thanks, my pleasure! We originate from Mikkeli, Finland, which is a pretty small city with not much to do. We started out as a group of friends and everyone just seemed to play something more or less on their own, or in some smaller projects. Somehow we ended up together to create the band back in 2005 and here we are, a few member changes and four full-length album releases later.

“Godsend” is your recent release, the fourth full-length album for your band. What inspired that album, what are your memories of recording it and what’s the acceptance from the metal-world till now?

Jarkko: Our creating process for an album has always been fairly easy and simple and usually starts with no deeper thinking behind the full upcoming concept. It’s more about just creating the songs to see what comes out and this was also the deal with Godsend, as most of the song themes and lyrics only came in when the vocal production started. Recording the album in studio went smooth, except that I had a really nasty virus and serious fever just before the vocal recordings were supposed to start, and we had to postpone them a little. The feedback of the album has been really great. I think we all agree it’s a strong album and fully stand behind the final product.

BLOODRED HOURGLASS has started as a Thrash-oriented band, with some Death Metal overtones here and there. This applies to your debut album “Lifebound”, which was released on Spinefarm Records in 2012. Since that album, the band started incorporating more Melo-Death Metal elements. For which reasons did this music turn occurred?

Jarkko: That’s very true. If you ask me, “Lifebound” back in 2012 still represented the time we were kinda seeking and searching for the final sound of the band. We tried a lot of stuff on that debut album but it was definitely more thrash-oriented. I think we grew up a lot musically and mentally after that album and wanted to take things a bit more serious, so going to a more melodic approach with “Where the Oceans Burn” was fairly logic decision at this point. Looking back now, I think taking this path was quite a game changer for us.

How would you describe your musical style and how did this style developed? Is there a particular philosophy behind your works? Usually where do you get your inspiration from?

Jarkko: Well if you ask me, the sound of Bloodred Hourglass is pretty much the sum-up and combination of all the elements and influences of the music we personally more or less like inside the band. We have never limited our vision to just sound strictly metal only, we’re always seeking influences and references from various genres and musical styles. I’m currently even a bit overdosed with metal music and actually find it quite un-inspirational and boring, and that’s when you want to expand your references. I don’t know about the deeper thoughts behind the instrumental side, but my lyrics are mainly inspired by just human life, and what a world full of wonders you have there to write about.

Ηow important are the lyrics in your songs and how does the whole lyric creation occurs in your band? What are the main subjects you want to analyse through your lyrics?

Jarkko: To me, they are becoming more and more important all the time. To me the lyrics are like a mental escape path from all the bullshit and it’s even kind of a self-psychotherapy to write and scream. I write most of the stuff but our drummer Jarkko also has some included. I hope the listeners find the interest to seek for deeper meaning behind the lyrics and be able to relate to the text and the subject. It’s very down to earth after all, mostly about human life and the related environmental issues.

Talking about yourself now, in the early days you obviously had your own inspirations. Which were those inspirations and what part do they have in your development as a musician through the years?

Jarkko: When I really started to listen to music it was LINKIN PARK, LIMP BIZKIT (yeah I know WTF), KORN, SLIPKNOT, MACHINE HEAD etc. Later on it was all about LAMB OF GOD , then IN FLAMES of course, INSOMNIUM, GOJIRA, ARCHITECTS… I think every frontman of the bands above has had more or less of an affect to my style as a vocalist. As you see, I’ve always skipped the big legends and the really talented singers. Just blah.

The story of BLOODRED HOURGLASS begun in the year of 2005. Could you name us the most important things that occurred through the past years, which made the band look and sound like it does in 2020?

Jarkko: Well obviously I have to name all the albums here as I think each one has been a big step forward for us. The single one biggest thing still has been the german record label Out of Line Music entering the picture. That’s when things really started to roll forward and I think we finally found a partner who geared up and started to work for us. This finally opened the central-Europe for us and there’s been a lot more progress since “HEAL” vs. all the years before this partnership combined together.  Anyways we’re just starting, so let’s see.

BRHG’s vocals have always been just pure growling. Have you ever tried clean vocal lines? Do you believe they would fit in your music?

Jarkko: Lauri (guitar) is doing clean backing vocals on records and I have some whining included too, but so far I have decided to stay mostly where I feel I perform the strongest. I think anything could fit in our stuff and never say never, but I’m more of a screamer. We’ll see.

“Godsend” was your first album on Out of Line Records. What made you decide to go with this label and how did they support this album? Besides the already made tour, what other plans do you have for supporting “Godsend”? Any chance of coming to Greece again?

Jarkko: Actually Godsend was released with the very same way the previous album HEAL was. The label on both is Ranka Kustannus from Finland and the albums have been licensed to Out of Line Music for more or less of regions to release around the world. So it may seem like an OoL release but we have these double partners in crime here for now. When it comes to touring more with Godsend, we would always love to do that as much as possible. We obviously got plans for a lot, but unfortunately nothing confirmed to mention here.

What are your goals & dreams as a musician? What do you want to achieve with your music?

Jarkko: I started because of pussy but was stupid at the time and picked the wrong genre. Seriously, everyone wants to grow bigger as a band. The thing that mostly drives me forward is when someone has found the deeper meaning behind our music and lyrics, and comes to tell you how big of an affect it has had on ones personal life. Maybe going through the rough times in life, maybe just getting through an exercise at the gym, whatever, each to their own but it feels really good to be involved with your art. I see people with tears in their eyes on our shows, coming to say hey at merchandise stand after the show showing the goosebumps still on their arms. That’s a message delivered if you ask me.

What’s your live shows like? Why should people come and watch you live? What’s the wildest thing you’ve seen or done at a live show?

Jarkko: We bring the energy, at least that’s what I’ve been lied to. No matter how rough or not the music, I also like to try and create a warm atmosphere on our shows. I feel it’s sort of a family over there all together. Obviously really hard to describe by myself how it may feel to be in the audience but people seem to enjoy a lot and that’s the most important thing. Production-wise, the bigger shows are still ahead for us. Not sure if we’ve ever done anything that crazy on stage, but the crowds tend to go pretty wild sometimes!

Any memories from your recent live show in Greece, together with EVERGREY?

Jarkko: Greece was great, especially Athens when we had some extra time to go “full tourist” before the show. It was my first time in the country, I also really enjoyed the show and it was really packed there in the venue. I want to return of course, hopefully we will be able to make it happen as soon as possible.

Thank you very much for your time Jarkko. The last words are on you…

Jarkko: Thanks for taking your time reading, can’t wait to see you soon, hopefully already this year! Stay safe.

Idolatry – Thunder From The Depths Of Hell