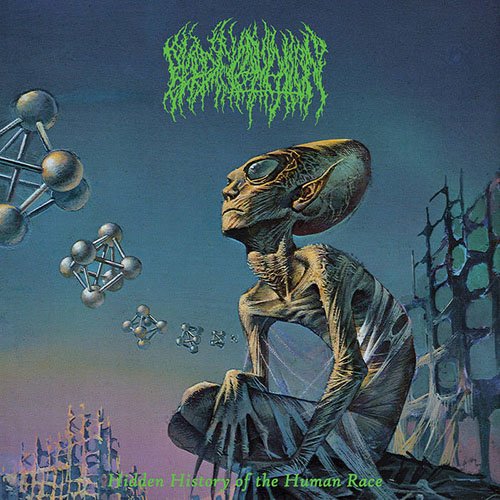 BLOOD INCANTATION is a Death Metal quartet that comes from Denver, state of   Colorado. It was founded in 2011, released, it’s first album “Starspawn” in 2016 and “Hidden History Of The Human Race” is their second album. Starting from the cover we have a foresee of what we are going to see inside. The cover is a painting by Bruce Pennington, a well known British artist, famous for his sci-fi themes. Some of his paintings we can see at the book covers written by Isaac Asimov, Clark Ahton Smith and Robert A. Heinlein, to name some of them and we are eager to say that the proverb “Don’t judge a book by it’s cover” does not fit here.

As the first notes of the first song “Slave Pieces Of The God” surge upon the air, we are starting to transfer into mystic places, mysterious worlds, along with weird creatures and visitors from other dimensions. Astral projections, transcending spacetime travelers keep on coming and they are meshing with our consciousness as we are listening to the second song “The Giza Power Plant” with clear references to pyramids, ancient Egypt and dark underground entities. The third song “Inner Paths (To Outer Space)” is instrumental and his purpose is to lead us to the final song “Awakening From The Dream Of Existence To The Multidimensional Nature Of Our Reality” (such a railroad…) an eighteen minute masterpiece which refers to ancient Babylonian and along with the passage and weighting of the souls by Ma’at into the Halls Of Justice and is pushes our minds far to the outer layers of our consciousness

Enough said with the lyrics, let’s see what is going on with music itself. First of all there’s everywhere the sublime of “The Great Old Ones” as we met them on their first three masterpieces. (I am talking about MORBID ANGEL, am I clear?). Blastbeats, technical drumming by drummer Isaac Faulk with influences by DEICIDE, along with the bulky and massive bass by Jeff Barrett are building a strong, solid and flexible at the same time wall around the gloomy guitar riffs by guitarists Paul Riedl and Morris Kolontyrsky. The compositions have a vibe and a 90’s feeling and that’s because of the totally analog recording at World Famous Studios in Denver, Colorado which gave the tracks a warm sound and made every detail to be heard in a supreme way. The guitar riffs refer to IMMOLATION and INCANTATION while there are some skillful elements the way that GORGUTS do. Matt Kolontyrsky vocals suit perfectly with the strength and the organized chaos of the other instruments and don’t overtake them while the  atmospheric moments are reminding us NOCTURNUS.

A couple of weeks ago I had a conversation with an old school metalhead who insisted that “Death Metal died in 1994”. I gave him the CD (old school habit) and he returned it saying “Hey, this group is really good”. This is the biggest achievement of BLOOD INCANTATION. They have the ability to combine old school Death with innovative elements and youth impetus. Definitely one of the best (if not the best) Death Metal releases of 2019. This is not only my opinion but is also the opinion of thegallery.gr web magazine readers who voted “Hidden History Of The Human Race” as one of the best extreme metal releases of 2019!