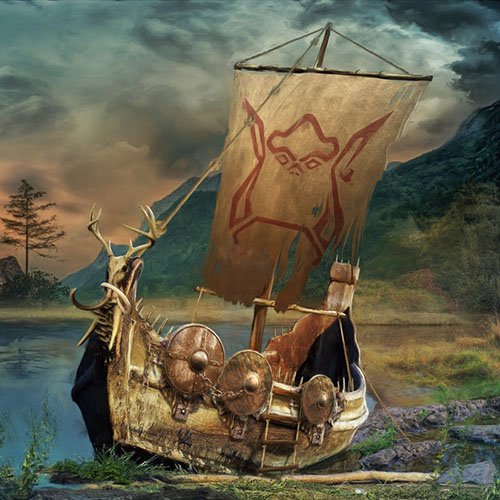 Second album for the Italians BLODIGA SKALD, a band that plays Folk Metal with a Swedish name and English and Russian lyrics. A very weird mix combines beautifully. After their successful debut “Ruhn”, here they are 3 years later to overwhelm us with their folk melodies and travel us in land of mythical lands with orks, elves, dwarves, kings, wizards…. And the scenery is ready! You close your eyes and let yourself in the melodies of the violin and the accordion, that so masterfully tied to the rest of the instruments.

Although Axuruk’s vocals are brutal, they sound as they should, as he sings both in English and in Russian. In Russian he speaks on behalf of the orks. There are also female vocals from Yindi (where the violin plays). At the song “Spirits Of Water” she travels you with her ethereal voice…

Great moments of the album “The Curse” (where there is a musical moment of “Borino Oro” of Goran Bregovic), “The Sacrifice”, “To The East Of Sorrow Town” where the accordion takes you to a magical circus and “Never Leave A Friend Behind”. In the end we meet the amazing collaboration with the gods of Celtic Folk music CRUACHAN in the song “Yo-Oh The Sail Is Low”. Keith Fay gave the touch that was needed!

Big surprise was the bonus track-epilogue “TechnoBlodiga” that, as its name says, strikes in techno beats. Its peculiarity is that it contains all the riffs of the rest of the songs of the album. Something similar to what NIGHTWISH had done in “Imaginaerum”. Something different, that for sure some will dislike.

Musically, BLODIGA SKALD look alike a lot with their hommies ELVENKING without of course the clear vocals and the Power Metal parts.

Summarizing, the 6 member band from Rome gave us a good album with very beautiful Folk melodies and this is a very big step in establishing itself in the big bands of the scene. Of course, they have a lot more to do in order to reach the holy monsters of the scene. But for sure they are in the right path. They have the quality and the image a band like this needs. Of course, everything is judged on the stage, something difficult at these times.  Looking forward to see them in our places when all this test is over. The curse has been beaten…