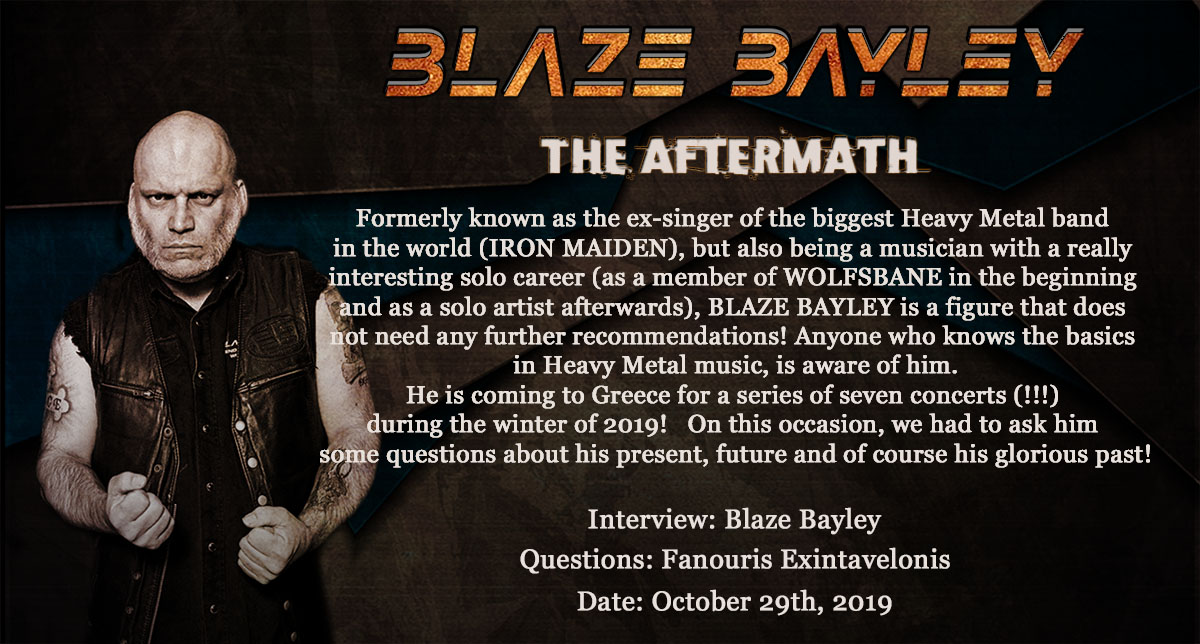 Greetings Blaze! Thank you for your time and for the opportunity to share with us some of your thoughts through our Web Magazine. You are coming to Greece for a really extended tour during December, consisted of seven concerts. Taking into consideration the fact that the appreciation of the Greek fans about you is big and of high levels, would you like to tell us something about that tour? What should your fans expect from you?

Blaze Bayley: I’m very excited to be reunited with my fans in Greece. They should expect a high energy show with songs from various parts of my career including the “Infinite Entanglement Trilogy”, my earlier solo career work and some of my songs with Iron Maiden. And a free meet and greet at every show!

Blaze Bayley: The themes explored in my trilogy are about what it means to be human. How do we define ourselves? Can love save the darkest and most troubled man? Can you survive when everything that you know is gone? Can you get back on your feet and fight back?

With that trilogy now over, what are your plans for your next work? Anything scheduled, anything already written? What should we expect for the future?

Blaze Bayley: I will release a live album and DVD in March/April 2020, a re-issue of my Tenth Dimension album including a vinyl edition in September 2020, then a brand new full metal album in March 2021.

You chose for all your latest works to be self-funded, having a help from your fans. What makes a name such as yours to choose that path? What are the benefits of such a choice?

Blaze Bayley: The support from my fans makes it possible to live my dream of being a professional heavy metal singer and to release my music as an independent artist. So, I have creative freedom and also with my manager, I get to decide what to release and when to release it, without having to bow to a large record label and their wishes.

You have complained in the past about the way that the music labels have treated you. Do you believe that music industry is more than just music, having more things in the background?

Blaze Bayley: I believe the industry has changed in many ways for the better so I can work independently and focus on delivering the best music, the best shows, with the best connection to my fans.

Part of your world tour has to do with the 25-year celebration for the “X Factor”, your very first album with IRON MAIDEN, containing some songs (some of them being yours) already considered to be classic. What do you remember from those times? Any memories from the other guys of IRON MAIDEN in the studio, recording that album? How were you treated as a “rookie”? Any funny moments there?

Blaze Bayley: It was a wonderful time for me. I learned so much. Great guys to work with. I was a big fan of MAIDEN before I joined. It was an amazing feeling being in rehearsals and recording with such experienced and talented people.

You have been the frontman in one of the biggest (if not THE biggest) Heavy Metal bands ever. What are you memories from the touring times with this great band? Memories of song-composing period as a part of IRON MAIDEN? What’s your best memory and, if you had the opportunity, what would you change from that period? Any memories from you live shows with IRON MAIDEN in Greece?

Blaze Bayley: My first shows in Greece were amazing. The Greek fans opened up their hearts to me as the new singer. It was a wonderful experience. It was a dream come true doing long tours. The best thing about it was the magnificent fans. It is nice to sing some of those old songs from X-factor now. My voice has developed and grown since those days.

“Blaze Bayley” is a brand name that can support big events! However, you choose to play in smaller venues. Do you believe that this choice brings you closer to your fans and helps you communicate with them better?

Blaze Bayley: The most important thing I look for in a venue is being able to deliver my best show for the fans, and that the fans are treated properly. This applies for big and small venues just the same.

The last time you’ve visited our country, I personally witnessed a show with you being absolutely interactive with all of your fans! Beside the fact that you’ve arranged some songs from your IRON MAIDEN years (with the expected reaction from the audience), I realized that in this gig most people enjoyed your full concert and not just MAIDEN’s songs! They were singing your solo career songs, they were showing their love for your personal albums. What does that means to you? Do the personal albums of Blaze Bayley show to all that you have much more to give, than only your presence in IRON MAIDEN?

Blaze Bayley: I’m extremely proud of my time with IRON MAIDEN. They were special times and I learned a lot from my period with the band. Now, I have my solo career and I believe the Infinite Entanglement trilogy is the biggest achievement of my career. Some fans still want to hear some IRON MAIDEN songs in my setlist and that’s fine, but most fans tell me they prefer to hear songs from my solo career.

Finally, something you would like to say to all the Greek fans and THE GALLERY’s readers? Some thoughts, while they are waiting for your upcoming shows?

Blaze Bayley: Thank you to all my fans in Greece . I am independent. Supported directly by my fans. They buy my albums and merchandise and tickets for my shows. They make it possible for me to tour and live my dream of being a professional singer. Thank you all for the wonderful support you give me!

Night In Gales – Beyond The Crimson Eclipse