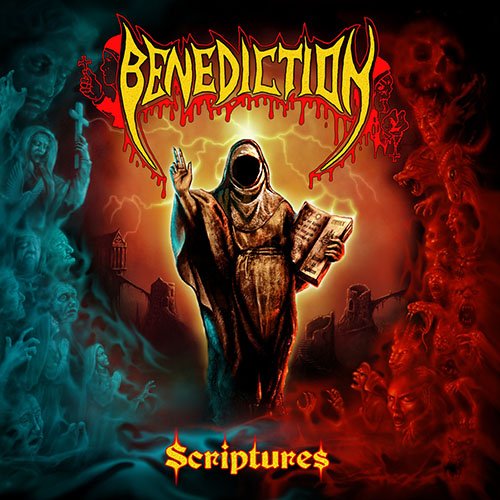 Some quite historic days for the fans of traditional European death metal are those we are living in, since the mighty BENEDICTION from England are back with a new album after 12 whole years. Well, they were not inactive at all anyway since were touring a lot, plus in order to keep their fans hot, they did some cool re-releases of the classic first albums and some compilation CD’s. Above all those, the icing on the cake is the glorious return of the original singer Dave Ingram after 22 years, taking back his position behind the microphone from Dave Hunt (also ANAAL NATHRAKH) who left last summer in order to get his Phd. The original guitarists Daz Brookes and Peter Rew are always here since day one, accompanied by the fresh blood that is Dan Bate (ex ABSOLVA) on bass and Gio Durst (ex MONUMENTUM) on drums completing the team.

Moving forward to the new album now, the first thing that someone would notice from the first playback is that it seems that time is passing by very slowly, if not at all for BENEDICTION and I don’t think its this whole quarantine situation we are all facing to blame for that. What I mean is that “Scriptures” sounds pleasantly old school, some may say “anachronistic” too, like a death metal album from another previous era. For the Great Old Ones (meaning the fans of over 45-50 years of age) this isn’t a bad thing at all. It is actually something we should expect from a band that exists for over 30 years and has made a huge impact with their discography and overall presence. If I had to describe it for those who are not familiar, I would say that this is a mixture of pure death metal with obvious influences from other historic bands like MASSACRE (Us), the neighbors BOLT THROWER and SIX FEET UNDER since I should also say that it is also very groovy.

So, the opening powerful track is “Iterations Of I” and it grabs you by the neck, while “Scriptures In Scarlet” and “The Crooked Man” that follow next are more in the “groovy” part I said before. “Stormcrow” which is the first video is increasing speed again while the next track “Progenitors Of A New Paradigm” is in my opinion the best track of the album , a heavy, old school, classic BENEDICTION as we all like. “Rabid Carnality” is another speedy number and after that “In Our Hands, The Scars” and “Tear Off These Wings” didn’t really attract my attention much. Same goes for “Embrace The Kill” but fortunately “Neverwhen” that comes next with its very heavy tune and great leads, very MASSACRE-influenced, is getting me back on track. On our way towards the end we get “The Blight At The End” and “We Are Legion” which are in the same vein like most of the material in here.

The production is very good and solid from the experienced Scott Atkins at Grindstone Studio in England and I think we should give special credits and honors to the guys at Wolven Claws Artist who did the artwork that is bringing us memories from the great first albums, great cover indeed.

Closing this presentation, I should say that BENEDICTION are back with a very dignified, well worked album with a lot of great moments that all fans of pure death metal should check out since there aren’t many bands who continue following this path, let alone being top in what they do.