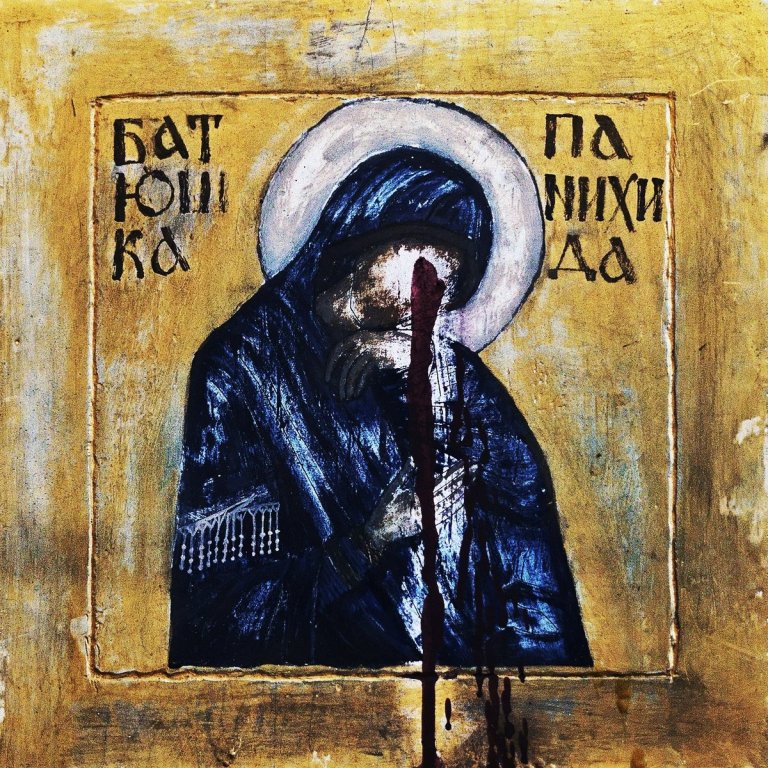 BATUSHKA seem to live in a shroud of drama lately. Krzysztof Drabikowski, founder and main composer of BATUSHKA, found himself removed from the band, claiming that BATUSHKA’s copyright has been stolen by the band’s vocalist Bartłomiej Krysiuk and that his version of BATUSHKA is the true version, however those are most likely questions for the lawyers.
On May 26th Drabikowski surprisingly released “Panihida”, his follow up to BATUSHKA‘s “Litourgiya”. The song titles are as simple as it can be, running through from Песнь 1 (Song One) to Песнь 8(Song Eight). The cover art is very similar to the first album, with a little revealing difference in the blood that flows from the eyes in the image.
On the musical aspect, the quality of “Panihida’s” songs is astounding. The elements that made the extreme metal world fall in love with “Litourgiya” are still there; the blend of black metal and Orthodox Church music is ever present, complete with the chants and the sound of the guitars with mid-doom touches. But there is an overwhelming melancholy and aggression in “Panihida”, more than the one found in “Litourgiya”. A pleasant surprise was that some of the tracks seem to be a lot more melodic, the band just seems to have strayed from continuous blast beats and harsh vocal and replaced them with slower and melodic sections. The vocals are mostly replaced with choral singing and the more traditional Black Metal shrieks are mostly drowned out on the background, also we can appreciate female vocals, as it is quite successful and gives a special credit to the album.
Concluding, BATUSHKA are back! “Panihida” is an absolutely worthy successor to “Lityourgiya” album! Even if it’s kind-of different from its predecessor, it is a firm reminder of how important BATUSHKA are for modern Black Metal scene!