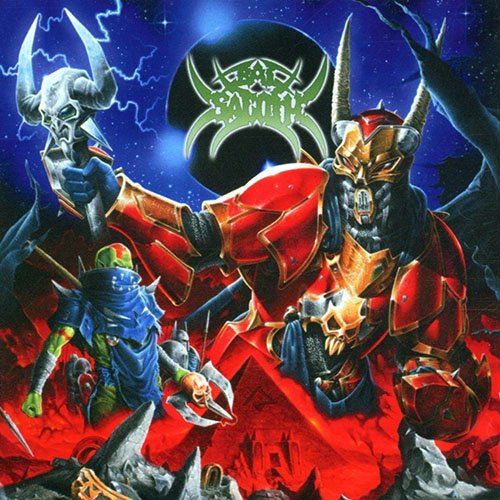 Good, now that “Atlantis has ascended” maybe it is time for you to do us a favour and get lost there for good….

The Heavy Metal equivalent of the brilliant board game “Crossbows and Catapults” (do you remember it?) is here again, as punctual as rush hour traffic, to cause smiles and frustration.

So, after eight trillion albums that are exactly the same, thirty-five billion words given to titles that look like an overdressed milf, Byron and his lads are returning like the bazar “laterna” players they are (i.e. “laterna” was a type of barrel piano, an instrument operated by turning a hand crank. It was popular in late 19th-early 20th century, usually in bazars or weddings. It was heavily adorned by gold coins, flowers and other decorations, hence the Greek idiom “dressed as a laterna”). The laterna players applies only to the music. So, the “Antlantis Ascendant” laterna is adorned and decorated by the gold sovereigns of the galloping “giddy-up-horsey”-metal that would sound “lukewarm” even to power metal fans that respect NARNIA, the bells and whistles from a synthesizer that reminds computer games on an Amstrad 6128 or the old Spectrum computers, as well as the very familiar dipole “Black metal scream / blue cookie monster from Open Sesame”.

If the British are doing all these accepting that the annoying and childish way they structure their music and the blatant playstation-ish way they present the fact they are influenced by mystery magazines is all they have to say, I give up. But they surely believe they are the rightful heir of a metal throne, some important crown with magical Palantiri stones.

But for now, they are only good for stoning!

PS. The initial publication of this review was in the Greek METAL HAMMER magazine – issue 195, March 2001

V/A – Sign Of The Covenant Of Death (Compilation CD)