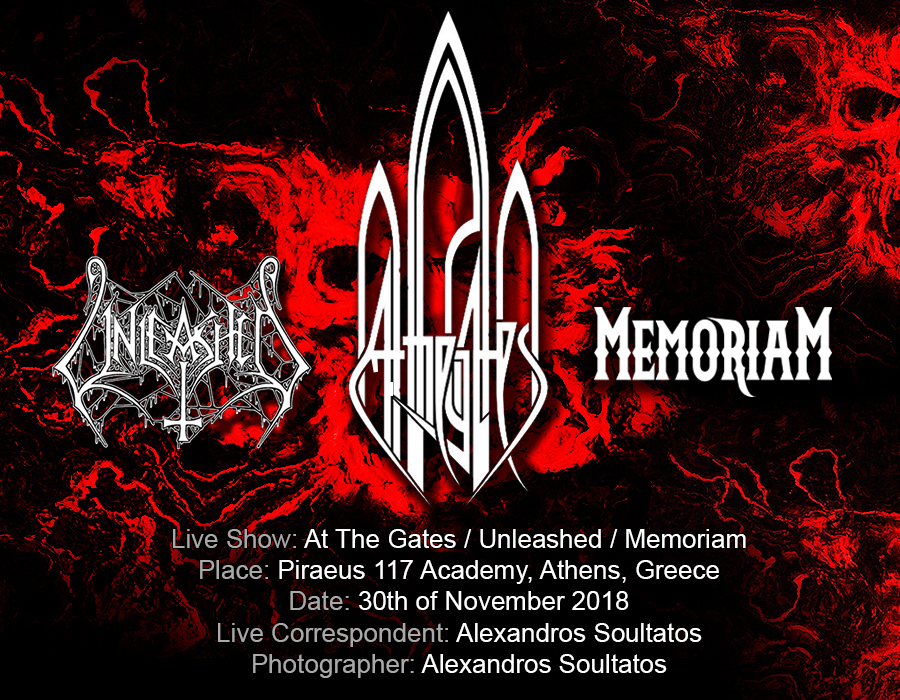 Another metal weekend in Greece has ended, closing November with the best way and opening December, with great metal bands in Athens and Thessaloniki. Except from AT THE GATES that we adore for everything they’ve done for the extreme metal scene, we were fortunate to see the legendary UNLEASHED for the first time in Greece, as well as MEMORIAM, an old-school death metal band, maintaining the standards set by BOLT THROWER.

I will make three short comments:

A. Incredible line-up. The British MEMORIAM with their fresh album “The Silent Vigil” were the ones that invited us to this Death Metal party. Karl Willetts is a god and his group gave us a strong taste of extreme aggression, with a small number of people inside the venue. The addition of UNLEASHED was an unexpected gift for all of us who love the Swedish sound! Having as a frontman the Legendary Johnny Hedlund on vocals and bass, the Scandinavians took us back when Death Metal sound was primitive and unique! The time has come. The leaders of the Swedish Death Metal scene AT THE GATES are here (for the fourth time in Athens), to present us how the Swedish Death Metal music should be played in 2018! Having released recently the “To Drink from the Night Itself” album, they played many songs from there but they’ve also honorer their glorious past, with many songs from their first albums!
Credits to the organizers for choosing choosing this great line-up!

B. The crowd attendance was really disappointing. With 560 tickets sold in Athens and just over 200 in Thessaloniki, we cannot be proud of the extreme Metallers in Greece, nor can we aim for and demand concerts with big metal bands. Really a shame.

C)  After 1 hour and 20 minutes stuck into traffic at the center of Athens, just before the concert, I needed a lot of beers and the “MEMORIAM vibes” to eliminate all of my nerves… At least, Tomas (Lindberg) once again proved to be friendly and conversational in the short talk we had before ATG appearance on stage. Really good times!

At The Gates’ Setlist: