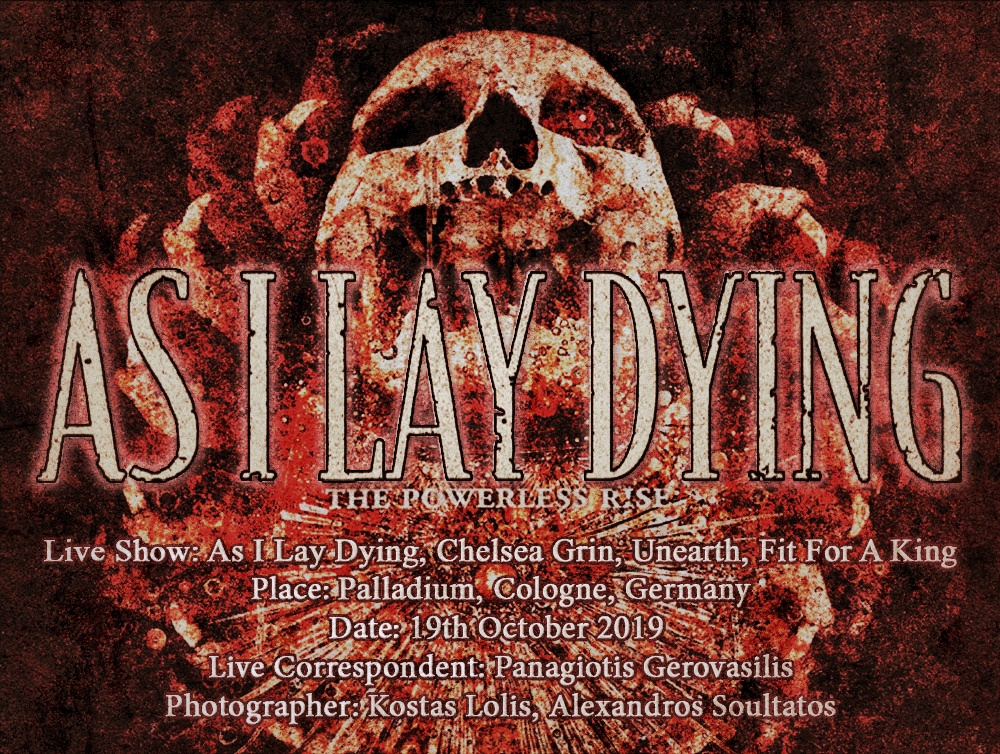 Is there anything better than meeting people through music? Let alone being in a crushing and powerful live show like the one of AS I LAY DYING! The meeting point was in the city of Cologne in Germany, inside an impressive industrial venue, named “Palladium“. The gang gathered there thanks to our common denominator Alex, who organized for the first time THE GERMAN GALLERY MEETING! Not the last, that’s for sure!

We suffered a long delay due to constructions going on the highway, which made us miss the first bands. Despite of our late arrival, the place was unbelievably full by fans going there early to enjoy the support bands too. Initial greetings were done fast and the first acquaintance with the rest of the guys was full of jokes and laughs. First stop before entering the arena was the merchantise store, taht was full of goodies from all the bands. Second stop was the bar for beers… of course! Third and last stop was the arena, where we intended to mosh really hard…

We “invaded” using the right side of the stage. The internal area was built in a total “industrial“ aesthetic, surely fitting with what was going to happen that night … A huge blue lighted banner was hiding the stage presantation of our favorite band.

The time has come! At around 21:10 the bravest of us moved in the center of the arena, where traditionally all the moshpit is going on! Five minutes later, while darkness was spread all over the place, the intro from the new album began! Screams of enthusiasm were heard everywhere and … BOOM!!!

The first song was “Blinded” and a human “lava wave” started moving right and left ,dragging everything on its path. All the band members, having a smile of satisfaction were wreaking havoc without mercy, using their melodies and their metalcore outbursts. The follow up was relentless with two of my favorite songs, while in the chorus I figured out that the same applied for the rest of the 2999 persons being there.

I refer to the songs “Through Struggle” and “Within Destruction” in which the people kept doing whatever was possible to demolish the entire place! The energy and the performance of the band kept staying on high levels, transmitting it to the public that never stopped singing and headbanging. The show, along with the amazing lights had many pyro effects with more impressing outcome bringing the outburst of the crowd even higher…

In the 90 minutes of the total appearance of the band, tones of sweat were shed, on stage and down in the arena, due to the endless movement and participation of the band members in the general chaos. Lambesis was obviously very happy, because he is now out of the prison that deprived him not only six years of freedom, but 6 years from having new releases and live shows!

That was the second time that I captured AILD live, after the Download Festival in England in 2010. For sure there is no comparison with that show, the improvement is huge! So, since the time for the end of the show had come, when the lights turned on there was a great smile on all of our faces and we just had to start counting losses because many of us were left without shoes, t-shirts etc.

The “Greek Team’s” participation was superb! We got together again at the exit with obvious marks everywhere, proving how good was the show we just attended. Those of us who still had some signs of vitality, ended at the Old Town of Dusseldorf among with German Metalheads in the historical metal club Papidoux, drunk and cheered in the name of Metal … AMEN …. Prost!!

P.S. 1: The absence of “Defender” was a great loss
P.S. 2: Cheers to Alex, Kostas, Vasilis, Valantis

1. On the 19th of October 2019 we had the grand opening of THE GALLERY companionship in Germany and, to be precise, in Cologne! In the “feast” that followed, the American band AS I LAY DYING leveled everything, in one of the most powerful and intense concerts I have ever witnessed! Superb sound, great venue, professional lighting and the band wreaked havoc on stage, with Tim Lambesis being truly out of control! Surely an outstanding experience, being one of the most explosive live shows I have ever had the chance to watch, HIGHLY DANGEROUS TO SAFETY, no wonder! Until next time, cheers!

2. My heavy metal salutes to the gang in Germany, Valandis, Vasilis, Kostas and Panagiotis and many “thanks” for their exceptional hospitality Thank you guys!

Setlist:
Burn to EmergeBlinded
Through Struggle
Within Destruction
Redefined (with Ryan Kirby from Fit for a King)