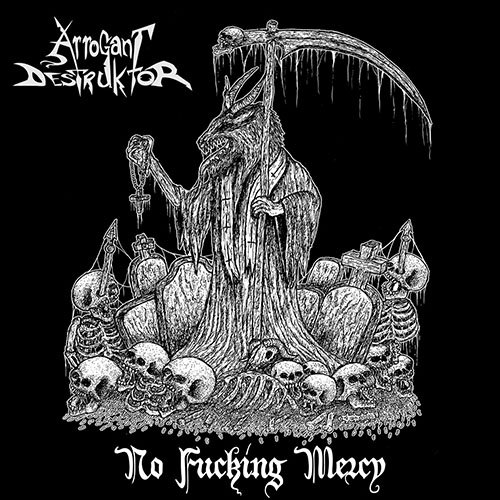 The British ARROGANT DESTRUCTOR is a relatively new band, as it counts only eight years of life, in which it has released two demos, a split and two full lengths. In 2020 they are releasing their venomous Black Metal poison with their second album, which has the simple but quite realistic, for its musical content, title “No Fucking Mercy”. It comes two years after their exceptionally good debut “Commandments of War and Necromancy”.

The album is an altar of worship for the old school Black Metal, for which the simple but retro cover prepares you, with the British adoring BATHORY, VENOM and the other bands of Black Metal’s first wave. Their sound is framed by some crust punk influences, which give a more personal character to their music and set them apart from the other bands of Blackened Thrash Metal. Stormy rhythms, guitars spitting one riff after another in a raw atmosphere. There are also some slower parts which, in combination with the addition of keyboards, create an intense atmosphere and function as a time out to catch our breath between the frantic rhythms.

“No Fucking Mercy” shows no pity to the unsuspecting listener and make their ears bleed in a sickly, addictive way. Without peculiarities, ARROGANT DESTRUCTOR offers us a remarkable album of early Black Metal with a feeling of the 80s, reminding us in the most ideal way of a sound that we have missed so much. Furthermore, fans of DARKTHRONE (of the records,F.O.A.D. Circle the Wagons and Dark Thrones and Black Flags), will love ARROGANT DESTRUCTOR as well as I am sure that Fenriz would also enjoy this album.