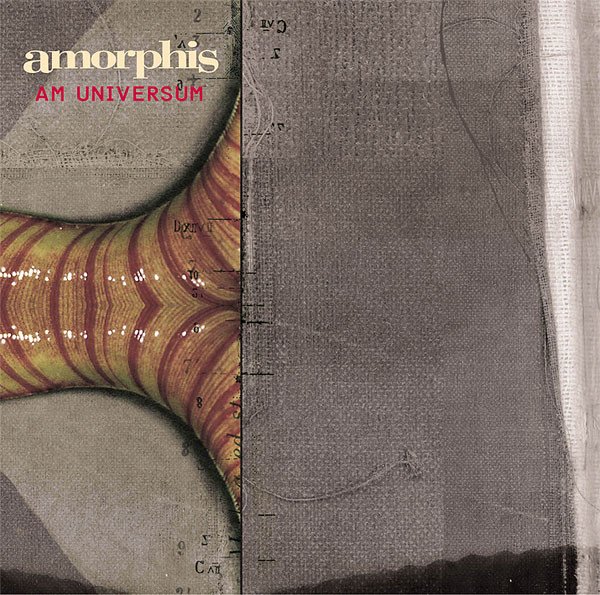 AMORPHIS. A band very well established in the Heavy Metal genre, known for their personal way of expression and their multidimensional musical identity. Wandering around Heavy discography for more than 10 years, they can easily be recognised as benefactors of the new Scandinavian melodic sound. Just a quick look at their 7 releases so far, can verify that the Finnish band has been the spearhead to anything they have done so far! This fact is exactly what drove them away from their well-known metal attitude. We would like to thank them for their contribution so far and we hope they will return one day!

“Am Universum”: Sealing the different musical face they have shown us in “Tuonela”, AMORPHIS deliver their 8th release (5th full length album) “Am Universum” and, with this, they destroy every hope to return to their initial sound. “Am Universum” is the natural continuation of “Tuonela” with, maybe, a bit louder production. Electric guitars with psychedelic rock feeling, clean vocals, keyboards, saxophone and an abundance of effects compile the recipe for this strange musical creation. Some could label it as “ambient rock”, others would be drawn to the groovy rhythms, underlining the space and psychedelic rock influences. The certain thing is that AMORPHIS’ genius countenance has managed to invent a personal sound, based on the musical expression of older rock bands. Ambient intros taken from different eras, when PINK FLOYD were on their zenith between good and evil, are present on most of the songs. Keyboards are suggesting that DOORS and DEEP PURPLE were the main influences and are highly glorified by the band.

Ten compositions in a diverse but, at the same time, familiar to the fans of this genre, character. “Am Universum” starts with the extremely PINK FLOYD-ish “Alone”, with a metal feeling hovering during the song. The same thing applies to the next one, “Godless (Of The Sadman)”, in which the melodies are far more noticeable. The third in line song is “The Night Over” and here we find the DEEP PURPLE-ish influences of the band and this is followed by the mellow “Shatters Within”. Generally, in the next compositions, “Crimson Wave”, “Drifting Memories”, “Forever More”, “Veil Of Sin”, “Captured State”, “Grieve Stricken Heart” there is an unique underlying feeling which you are asked to unveil through listening. It looks like AMORPHIS are using their music for a higher than the usual purpose and I want to believe that they are really satisfied with what they are doing.

P.S. The initial publication of this review was in the Greek METAL INVADER Magazine – Issue 54, April 2001