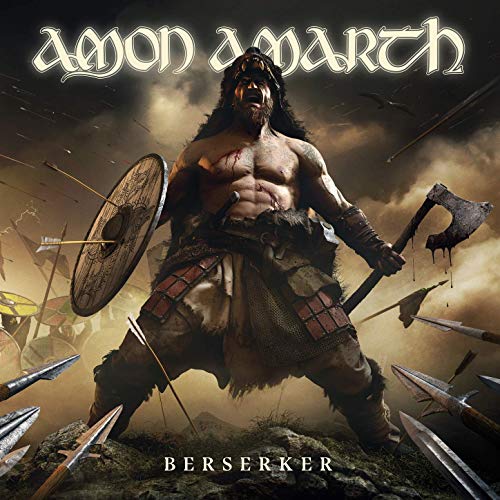 The “Berserkers” were the most feared and devastating warriors ever in Norse mythology, as they were selected by the gods in person to be possessed with a fierce warlike impetus, and potentially capable of turning them into real war machines, furious and bloody. Similarly, the Swedes AMON AMARTH have managed, over the years, to build on their success, becoming at the dawn of their 27-year career, one of the most popular and appreciated metal bands in the international metal scene, with stunning sales figures, live performances in front of huge crowds and merchandise for all tastes.

“Berserker” is the 11th studio album of the band. It was produced by Jay Ruston and marks the first release to feature drummer Jocke Wallgren, who joined the band in 2016. Let’s be sincere; “Berserker” has nothing new to offer, compared to the last two releases of the band, especially after “Jomsviking” where the radical change in AMON AMARTH’s sound really made sense and wasn’t trivial. Instead of this, two things came to my mind while listening to the album: On the one hand, there’s the idea that the sound has become more mainstream, especially for a band like AMON AMARTH, while the other thought is that probably we didn’t need this album; a tour would have anyway gone very well, and the fans would have been satisfied, given the great live shows that the band manages to offer. However, leaning towards a more mainstream metal style is not such a bad thing after all. Over the years, AMON AMARTH has proven to be a great band on all fronts, from the music to the marketing front, becoming commercial without selling-out, and this album provides the proof.

In theory, “Berserker” would be a great release in terms of presentation: This is the second concept album in a row (the first was “Jomsviking”), forwarded by a videoclip that introduces the story to be told, but as I said, it can be considered a great album only in terms of marketing. In terms of music, there are some conflicting ideas: When you listen to the album, you reach the conclusion that this is actually a banal album which might prove to be a great showdown for the band. By banality, I mean the riffs; many of them are too similar to each other, both with respect to this album and to the previous one. The same goes generally for the lyrics: you can easily separate them in three types of themes: battles, Norse mythology and pagan festivals (although in this case there are no songs of this genre).

And where does the band’s strength lie in all these? It can be found in the fact that, despite its drawbacks, the album is not at all bad or pointless, and even the older fans of the band maybe won’t complain about it. “Berserker” seems like an ideal album to attract new fans who will get the goosebumps by listening to songs like “Shield Wall”, “Mjolner”, “Hammer of Thor” and “Valkyria”, whereas longtime fans (accustomed to the Swedish melodic death metal sound) can only hope that the band will continue in this path without moving further away from its music roots, and succeeding in crafting epic anthems like “Ironside” or telling us stories like the one presented in “Fafner’s Gold”.