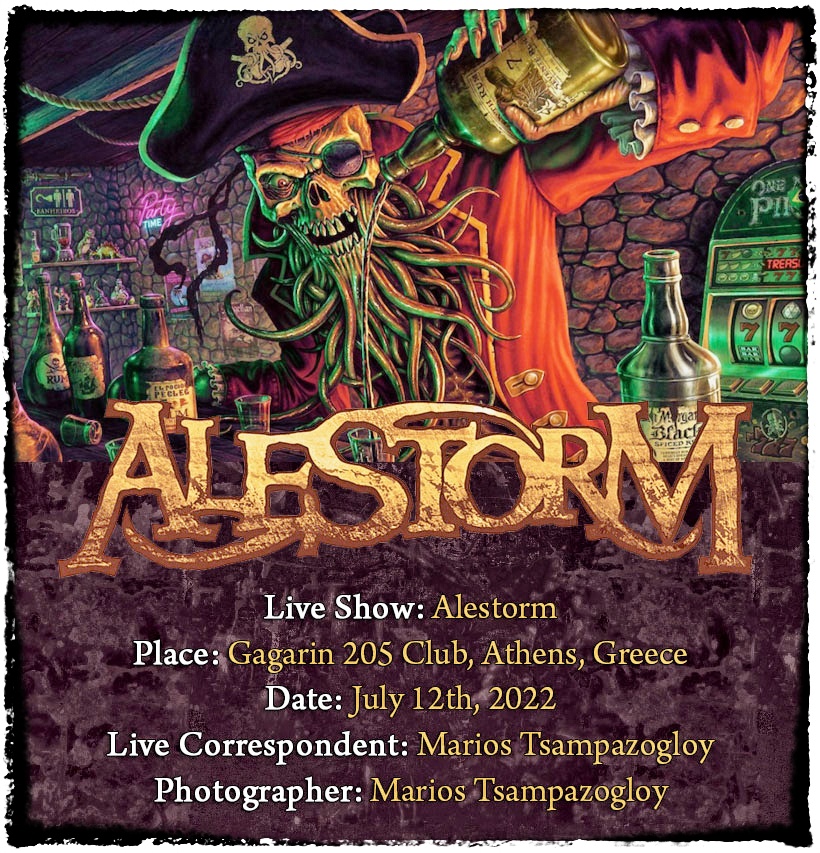 The pirate ship that goes by the name of ALESTORM has set sail for new quests in our country! With the first stop in Thessaloniki, it was the turn of Athens the following day (12/07/2022) at Gagarin 205 to drop its anchor. The crowd had started to gather quite early and everyone had at least a little pirate accessory on them, even a cosplay skirt dressed as a captain, and we all hummed the tunes from our favourite tracks as we waited to enter.

Doors opened at 21.00 as scheduled, and the Pirate Metal Drinking Crew made their appearance at 22.00. Leveling out from the first note of “Keelhauled” they had the whole place dancing and bouncing to their every tune. “Treasure Chest, Party Quest” and “Mexico” took us to magical and certainly pirate worlds. The sound was very good, the intensity was just right and the emotions were stormy. The baton was subsequently passed to the band’s new album and the track “Maggelan’s Expedition”. Back to the old days with “The Sunk’n Norwegian”, where the crowd shouted the chorus lyrics as loud as they could. “Shipwrecked” and back to the title track of the new album “Seventh Rum Of A Seventh Rum” and the band’s also title track “Alestorm”, where the crowd enjoyed it as much as they possibly could. The trip continued to “Tortuga Bay” where we had a “Hangover” and then we went back in time to 1741 and the battle of “Cartagena” where the “Zombies Ate My Pirate Ship”.

ALESTORM decided to let us take a breath as the songs played non-stop, with almost no gap between them! That’s where the sweet melody of “Nancy The Tavern Wench” begins, which happens to be one of my favorite tracks. Christopher (frontman) addresses the audience and says that whoever knows the lyrics has to sing and whoever doesn’t know them has to paddle! That’s it! The crowd sat down on the floor of the Gagarin and started paddling… That was the only breath we got after the follow-up to “P.A.R.T.Y.”, as it was time for “Captain Morgan’s Revenge” and “Shit Boat No Fans” to close the first part of the live show. The band returned quickly after the fans’ applause for the encore, giving three more songs that made the crowd get the rest of their energy out by singing “Drink” and “Pirate Metal Drinking Crew” along with the band members and at the end they said goodbye with their middle fingers raised by singing “Fucked With An Anchor”. It should be noted that during the concert when backing vocals were needed or let’s say “rapping” e.g. in “Hangover”, the microphone was taken by a bandmate wearing a shark’s head!

The things that will stick with me regarding this particular live show are the great sound, the nice organization by the people in charge, the incredible turnout and the warmth of the audience, who welcomed a relatively new band in the most cordial way. And finally the impeccable professionalism of the band, who showed that they are not only good musicians but also great guys, giving us autographs and photos at the end of the concert!